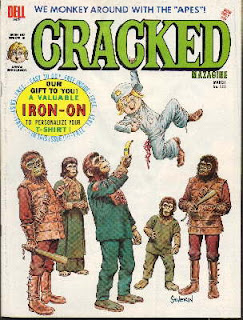 NB: This is being written "On The Fly". My "connection" recently gave me a copy of this issue and I've decided to read it for the first time and write as I read. I think it seems like a good idea. But, I have had some terrible ideas in my life.

The apes and Sylvester are standing in the white void so loved by fans of the "Apes" movies. (If I'm thinking of the right movies...) Look at the ape on the left... he's the best. And, an Iron-On. Could more gifts be given to one person for "only 50 [cents]". I think not, my friends.

INSIDE FRONT COVER: An ad for CRACKED Binders/ Notebooks. Where do you think I'm writing the first draft of this? In Notebook "F" with Monsters!

TABLE OF CONTENTS: Hagar the Horrible? What, for real? "Kent C. Wellatol, proofe reider". Two writers... So few men making so many beautiful gags. "It doesn't ape-pear that they ape-prove of your monkey shines, Sylvester!" Truly, this is bitchin'.

LETTUCE FROM OUR READERS: Kojak! Next issue - January 28th. And... a Statement of Ownership, Management & Circulation. (I love these. Some of their funniest stuff is in here. You just have to look.) Single issue published nearest to filing date: 880,000. Slay me, CRACKED! There is a funny subscription ad here with a knight.

PLANET WITH THE APES: Sleet Burdon and Alien Burpe crash on a planet... with these crazy Ape People! "She's the gorilla of my dreams" is used and it is not a joke because she is a gorilla. The astronauts wander through the landscape of the TV series based on the movie. There's some gaggery and a very entertaining banana. I like the first movie in the series. I don't remember the others and I did not see the TV series. but, these five pages are charming enough. The producers don't use real apes in the show. They use horses in ape outfits! The article does feel a bit on the half-formed side, like it's the first portion of a parody that got stopped short. I think it's mimicking the format of the TV show but it still feels abrupt. But, then, it doesn't overextend itself or make me wish I was elsewhere so...

HOW TO STAY WARM WITHOUT WASTING ENERGY: Invite a Politician to dinner! Hot air! Have a 300 lb. gorilla sit on you! Start a small fire! (Don't burn down the city.) Gain 400 pounds! Look this is comedy for you for me and your Big Fat Mama. A series of panels that give you heating tips. Ladies grow out their nose hair and wrap it around their neck. Cuddle someone you love. I love CRACKED. Will they let me cuddle them, I wonder?

THE COUNTRY BLUES: We follow several city/ suburban folks as they move to the country... Uh oh! They have some problems. There's four pages of this (which seems a little excessive). Three panels on each line. First one is what the city person is running from... Middle panel is "...so [he or she] moved to the country-" and the third panel is the patented CRACKED Zing! May I share a few?

Skip ahead if you don't like being shared at.

"In the city Terry Kloth was rudely awakened every morning at five..."
We see garbage men.

"...where he's still rudely awakened every morning at five."
A rooster...

Another one?
"Sally Forth was tired of seeing her surroundings grow up every which way"
Building going up

"...where she's still tired of seeing her surroundings grow up in every which way."
Weeds! Very tall weeds!

One more? Sure...
"In the city, Molly Coddle always had to worry about intruders"
Tons of locks on her door.

"...where she still has to worry about intruders."
Frogs & snakes!

A CRACKED LOOK AT GOLF: Give me the phat gags! 4 pages of MAD-style jokes about golf. Ladies are terrible at it! This joke appears: "Idiot! Your ball hit me in the head! I'll sue you for $5,000!" "I said 'Fore'!" "I'll take it!" A guy hits his ball into a swamp and has "problems". The jokes go like that and we learn as we go. I didn't laugh at these jokes but I think there's something different, something deeper going on. Thank you, boys. There are some pretty buxom ladies golfing here. Why don't I learn to golf?

HOW TO MAKE WORDS PICTORIAL: I think the intro will explain it better than this French-Canadian reviewer ever could. "Why can't Johnny read? Mainly because today we live in a world of pictures. The printed word is becoming obsolete. Now, if we don't want words to disappear entirely, what we should do is make them more "pictorial" to look at. To show you what we mean, we have come up with several graphic examples of..."

And more...
Pretty fun page. Better than that golf crap. (Ted, should I edit that out?)

IF THERE HAD BEEN WOMEN'S LIB THROUGHOUT HISTORY: Thank God for Women's Lib because without it we wouldn't get awesome articles and TV show episodes about Women's Lib. How does this one stack up alongside others? Pretty good, I'd say. Cavewomen demand to not be dragged by their hair anymore. More fashion news during Colonial Times. "Queen Guinevere & her Knightesses of the Round Table" include the Bride of Frankenstein and Gloria Steinem. And Tiny Tim. Hagar the Horrible has some peace-loving lady Vikings with him. Why is it only three pages? The golf thing was four... Hmmm...

CRACKED GOES TO AN ENCOUNTER GROUP THERAPY SESSION: All sorts of people at a group session and, yes, there is a "we need the eggs" portion. "What do you think of a Freudian slip?" "I never knew he wore one!" These pages seem alternately cluttered and then not-so-cluttered. How could they be out of jokes for this? They're just reusing the jokes that were used last time, aren't they? I love the relaxation of this article but I don't like this article. I wish I could explain it.

Well, halfway in and I, frankly, can't remember a darn thing about this issue... Let me scan my review. Oh yes. Now, I remember. Let's continue.

THE CRACKED BOOKSTORE: Until they sell the Fonz for President, I'm not interested.

THE FAR-OUT FOUR: Four superheroes who are going to save America! The Six Billion Dollar Man! Super K, the Super Henry Kissinger! Silly Jack! Kung Phooey! This is a five-page superhero parody "Good Time" with our foursome cutting prices and stopping inflation! And cleaning up the cities, literally! Kung Phooey uses his stinky feet! This is sort of MAD-like satire but told through the gloriously child-like eyes of CRACKED. These pages arc by. The concept is funnier than anything that actually happens but I don't care because I will laugh at anything!

YOU KNOW IT'S NOT YOUR DAY WHEN...: Wow. Three pages of this. "...you see the doctor who's going to operate on you faint at the sight of blood!" "...you lend money to a friend of yours and the next day he develops amnesia!" "...you find that by mistake you've brushed your teeth with shaving cream!" Well, I guess those, and many other things, would make you think it's not your day. I wonder if I could collate the CRACKED gags and see if they've used these before? I get the feeling that I may have seen some of these in previous articles but... I do love them. I'll laugh at a good joke twice. I'll laugh at a bad joke forever.

CHINA CLOWN: Six pages of gimcrackery revolving around Chinatown. Hmm... I like the movie but, for some reason, I had trouble getting through this one. It's not that the jokes aren't funny. (I sure didn't laugh but I have more important things to do with my time.) There is a kind of wonderful strangeness to it, matching the convolutions of the plot of the movie. The art is good. Sometimes (has this ever happened to you?) I stare at these articles and I just cannot focus on what folks are saying. I just look at the pictures... Maybe someone else could read this one and love it?

CRACKED INTERVIEWS THE CHRISTMAS KING: Merry Christmas! Nanny goes to New York City to interview Mr. Sandy Claws! Hooray! Turns out that Sandy has given out enough ho's today to plow every garden in America. Kids do suffer from the "gimmies". Sandy explains this fresh concept to all of us. Nanny takes a 747 to the North Pole. Turns out Sandy is married to a hot young lady. Sandy, please! Guess which reindeer dances? Sandy unplugs Rudolph's nose because electric rates are so high. We get to see the Sandy's friend the North Pole standing outside. (North Pole? get it... get it...) Turns out Sandy is thin. He just wears a lot of thermal underwear. Nanny wishes us "Seasonings Greetings!" Awesome article. I wish this was all Christmas.

SHUT-UPS: Only two because of the Iron-On.
1 - Nincompoop!
2 - Blackguard!

IRON-ON: "If you're CRACKED, you're happy!" Hi, Sylvester!

BACK COVER: A fun five-panel cartoon called "It Happened On Main and First". I won't ruin it. Buy the issue.

So, what did I think of this issue? Well, it's certainly filled with material. I laughed four times and chuckled twice. There was one guffaw. And, a chortle snuck past midway. I loved the Christmas bit. Because this is CRACKED, I will give them a pass on this one. Maybe I need to research and read beforehand from now on. Yeah...