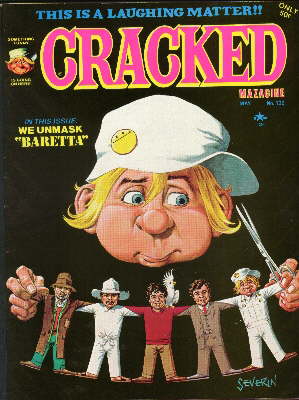 We are, literally, on the cusp of the CRACKED Renaissance. The magazine has been placing all of its bits before us and, issue by issue, fiddling around and trying to show us some sort of cohesive package. It's not here yet. But, God, you can taste it! And, it's salty! But, the good kind of salty.

The cover is great. We don't normally get the black background. I, myself, have seen no more than five minutes of the TV show Baretta but there is charm here.

The poster this month has a lot of text in it. It is an announcement that March 26th has been set aside as a "special 24 hour period...between March 25 and March 27." Pithier is better.

I will try not to speed us through this review but sometimes you can see the horizon and it's tough to linger down the street.

Contents: "Noah Webster - proof reader" This will pay off. I imagine.

BORETTA: A charming little bit. Six pages of TV-cop show gags and Boretta dressing up in assorted disguises. A little boy's grandfather was shot. Boretta is on the case! "Who's there?" "Summa." "Summa who?" "Summa enchanted evening." "Sorry, I'm not lettin' anyone in--especially with material like that!" The parodies like this are so much less heavy-handed than similar Mad parodies would be that they just flow. Fewer piles of dialogue. Jokes to go. And, those entertaining drawings. I can't complain. There are better openers out there but this is solid.

FILL-IN-THE-BLANK FORM LETTERS AND CARDS FOR EVERY OCCASION: Goofy drawings with form letters next to them. The letters have blank spots that are numbered. Beneath the letters are the numbers with various lettered choices. Here is an example in which I have made the random choices. The body of the letter is in brackets. My choices are preceded by their numbers: The Greeting Card - (1)On this your 10th attempt at a happy marriage... [May this day be bright and] (2) not so hot. [On this the] (3) saddest (boo hoo) [day of your life. We travel only once this path and for you] (4) it's been tourist all the way. [With all my prayers and all my wishes] (5) I wish someone would wash my dishes. [Your Brother, Ralph.] When you pay for comedy, comedy delivers.

WHAT TODAY'S PROGRAMS WOULD LOOK LIKE IF THEY APPEARED IN 2001 A.D.: Archie Bunker is racist towards people from Mars. Mannix's secretary is now in charge of the agency. Sponsor's hands reach out of the TV to slap you with products. NBA Basketball players are as tall as the ceiling. Everyone is bald but Kojack has hair! Remember when all this happened?

CRACKED EXPOSES DETROIT: And did they ever need taking down a peg! How lazy, drunk and stupid are the auto plant workers in Detroit? You don't want to know! And, if you do, well, Cracked has four pages worth of zings that will knock your shorts off. Take that, Detroit! Next! Flint, Michigan!

HOW DIFFERENT MAGAZINES AND NEWSPAPERS WOULD CAPTION THE SAME PICTURE: An honest-to-goodness funny bit. Using the same picture several times, they put it on the front of different magazines and give it new captions. This is a clever idea and will make you smile. Strangely enough, I don't remember them really doing this bit again. The skeleton in rags gets headlines in "Women's Wear Daily", "National Examiner", "L.A. Freak Press" and "Utah Reporter." It's funny. Read this one.

A CRACKED LOOK AT A TYPICAL SAVINGS BACK: Keep us down to Earth. We don't want too much high comedy to mess things around. Imagine the inside of a bank. Imagine the layout of other "CRACKED Looks..." articles. There you have it.

THREE HOURS OF THE CONDOR: Fun, fast-moving. Follows the movie very closely. It does have those strange moments where you need to know the movie in order to make connections between the panels but, overall, a sharp movie parody.

ONE DAY IN THE DESERT: A guy finds a sandwich in this one-page comic. There's a yukker at the end involving condiments.

POSTCARD COLLECTING: Four pages of deltiologist-related gags. The gags are obvious but some of the drawings are funny. If you've ever seen real Americana postcards, you'll know that these CRACKED fakes aren't anywhere near as odd or interesting.

MORE COMBINED MOVIES: "Dracula" and "Snow White and the Seven Dwarves" One page charm. A good gag at the end. It's fun to see the dwarves fighting Dracula. What is the outcome? Well, let me just say this--Dopey brings the wrong kind of stake. Got me?

THE CRACKED GUIDE TO HOCKEY: Well, as long as there are sports and hobbies, this bit won't end. Four pages. There is an anthropomorphic puck that is funny and a couple of good gags. The bit about goalies doing whatever they can to block a shot is nice. Not bad.

CRACKED INTERVIEWS THE SUPER SALESMAN KING: Nanny is here and she is all-there! If you follow me. The Super Salesman King is sleazy and a liar. But, Nanny is there shoving that microphone up his moustache and tearing it up. Nanny, we love you! Is there a Nanny Fan Club? May I be the Treasurer?

Total Tally -
Wednesday the 4th.
(I can see the heart in the put-down this month.)

GREAT MOMENTS IN HISTORY: Moscow, Russia May 2, 1656 Something gruesome and Communist, no doubt.

A fun issue with genuine laughs. The pacing of everything has improved significantly. The usual stinkers aren't as damaging here. I am looking forward to getting to the real CRACKED Nitty-Gritty. This is exciting.

Next issue: A Cameo appearance from The One Who Would Save Us All
Posted by Turbot's Finest at 12:22 PM