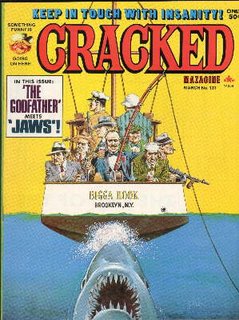 You can see the cover, yes? Is it not superb? Oh, the team-ups will proliferate and multiply but here is the genesis. The little box to the right of the Contents on Page 3 sums it up best: "Hey, Don Corleone!! You better check your line, 'cause someone's about to make you an offer you can't refuse!! And--he's armed to the teeth!! Lotsa luck!" Let's wriggle past the Bigga Hook and leap inside...

POSTER: ATTENTION! The end of the line begins here." Yellow background. A large black arrow under the words.

CONTENTS PAGE: Proof Reader - Noah Webster (?) Looks like this will be a good one.

LETTUCE from our Readers: A pleasant romp. I really want to get to the "beef" of this one so forgive my movement.

IF HIT MOVIES WERE COMBINED: Awesome! They really hit it here. When I was a child what I wanted so badly was more team-ups. Star Wars meets Star Trek. The Sweathogs get mixed up with the Godfather. The Family from Good Times get stranded overnight with the Cunninghams. But, of course it didn't happen. (Rarely.) That's why we have imaginations (and action figures). CRACKED really spanked it here. Watching characters from movies we love cross-pollinate is awesome. Are the jokes great? Not really. But, that's not the point. Seeing is the thing. It's joy.

The Godfather and Jaws! As the cover promises. It is not a full bit just a two-pager but it works better that way because it doesn't drag.

Love Story and Bambi! That guy from Love Story falls in love with, and marries, a deer (Bambi). It's one page long so it's the perfect length for fun!

The Wizard of Oz and the Exorcist! The Cowardly Lion gets possessed by a demon. In the end the evil is driven out and the demon looks just like a certain buck-toothed mascot from another humor magazine. "So that's what evil thing was driving him mad!"

Lassie & Young Frankenstein! Can you guess the joke at the end of this one? Dr. Frankenstein, a dog? Write to me care of the blog and I can help you out.

Bonny & Clyde, Butch Cassidy and the Sundance Kid, Murder on the Orient Express, Capone & the Three Musketeers! It's one page long but I'm worn out from writing down all the movies.

Great bit. It would repeat in abbreviated form over the next year or two. Wonderful beginning. Much better than a single subject parody, in my opinion.

THE FEMALE ROLE IN AMERICAN HISTORY: Jokes about women's role in American History, oddly enough. Some great drawings. The article is that strange mix of jokes celebrating women and then mentioning how they love talking and gossiping and... Well, really that's it. I can't imagine the same people who got joy from the previous article found this bit to be worthwhile. But, maybe it was for the dad's. It does contain the title of the first American etiquette book: Emily Flapsaddle's Rules for Common Courtesy for Cowpokes. So that's something.

HOW A BIG CITY CAN PREVENT BANKRUPTCY: Basically, by taxing or charging for everything. Fees for entering a city. Bigger fees for leaving a city. A city could enlist muggers to help them out. "I won't mug you if you give me a $25 check made out to Philadelphia." It's an actual funny bit. The art is just great. I'm not 100% sure who did the illustrations here but the pictures are funny enough to match up with the words. (Most times they are funnier.) Great article.

IF TV COMMERCIALS LASTED 61 SECONDS: Just what you think. Exciting. flashy commercials. CUT! Something awful happens. A woman is shown using Lady Clearall to change her hair color again and again. CUT! All the hair falls out of her head. A man shows off his new hairpiece with a smile. CUT! A little furry dog stands up from the bald man's head saying, "Are we done yet?" At three pages, it will take you all of one minute to read and most of it is fine.

CELEBRITY GARBAGE: To text-heavy. Feels like a Mad bit. Notes and bits of random trash from people's garbage. Specifically, we see Saint Nicholas, Superguy, President Ford, Don 'Godfather' Carboney, Count Dracula and Abe Beame, New York Mayor. A bit to cluttered. There are some laughs here but if I wanted to read MAD this would be the MAD Review and I don't have that much time on my hands.

CRACKED VISITS A PRO FOOTBALL LOCKER ROOM: "You're one of football's fastest running backs. What's your secret?" "I drink a quart of prune juice before every game!" You can go from there.

HAVAII 5-0: Not bad. Those TV parodies, I tell ya. I've never actually watched an episode of the show but this is a funny, fast-paced, five page bit that's got some smiles and some really goofy panels. Every time they go to a commercial a wave washes through their offices. I can only imagine what that must have looked like on the show itself. If they did the parodies in every issue like this one, I think I could really grow to love them. One solid standard; one with a little more pizzazz. Unfortunately, that's not really going to happen but--

RULE CHANGES IN SPORTS THAT REFLECT THE REAL WORLD: Sports folks being forced to play games as if they were real life. "Very few of us take the straight and narrow path in real life. Bowling alleys should reflect this fact." A bowling lane with a big curve and large gutter is shown. "Human beings don't start out equal in life, so why should horses?" A very rich man and his horse are shown at their "Head Start", which is a foot from the finish line. A poor man and his poor horse are shown going the wrong way, blindfolded and dragging a 2000 pound weight. Actually, quite a funny bit. The captions, however, are more thought-provoking than the pictures can handle. Some nice satire in here. CRACK ME, boys!

The LOSER: A funny two-page wordless cartoon with a very unlucky man. Nicely done with a great final panel.

THE CRACKED WORLD OF MOVIE GOING: Mad-style short strips with gags about people talking to loud in theaters or getting their feet stuck to the floor by gum or getting in the wrong line. Not too much fun. More of an "Oh" kind of bit than a funny one. But, some of the people are goofy and a little kid wants to see "The Giant Lizard vs. Mavis the Mammoth Moth!"

YOU KNOW YOU'RE NOBODY WHEN...: One of these bits. 12 captions followed by illustrations that show us what the caption said. A couple of the captions and illustrations are funny ("You Know You're Nobody When...The Census Bureau flatly denies your existence...") but it's filler.

The issue started out like CRACKED but it's ending up feeling like Mad. I guess they didn't exorcise that demon after all.

An ad for the CRACKED BOOKSTORE follows.

CRACKED INTERVIEWS THE MAGIC KING: She's back and she is Va-Va-Va-Va-Voom! I threw an extra Va in there because she's back! She interviews Melvin the Magnificent! He does all sorts of tricks and trains all sorts of junior magicians. She's not really de-bunking anything just sort of walking around with Melvin. But, she's so charming, who cares? Don't go, Nanny. Stay with us.

There you have it. As I've said, we are moving towards the Renaissance but we are not there yet. They get one portion of the magazine right and let it down in the next one. Very uneven. Is it the material? Is it the presentation? Is it the order of articles? We'll find out.

Next time - Just Around the Corner from Fun!
Posted by Turbot's Finest at 12:24 PM