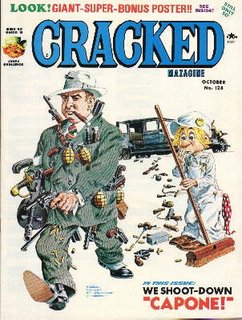 As one can ascertain from a perusal of the cover of this installment's issue, gangsters are once-again all the rage. Al Capone drips weaponry as a fat man would drip sweat after a jog around the old school track. Our Sylvester is left staring at him in confusion. Is it worry over how he'll clean this mess up? Is he wondering how to tell this man that his guns are showing? Has he just realized that he could kill this man and became "King of the Gangsters"? Sylvester never gives the game away. It could be all of these things--or none.

There is some sort of clue that seems to have dropped from the groin region of Mr. Capone. A small grouping of blue words: "Retailers: See page 5 for Display Program Announcement" ? We'll have to wait for Page 5.

After such a charming and questioning cover, one can only wish that the rest of the magazine matched it. Well, this dream will not come true today. There are a few lovely bits that troll the funny up to the surface but much of this issue is flailing chicanery. The editors have exhausted all their old material. They are re-hashing and muttering on. Awaiting the next pop culture explosion, I guess. Regardless, let's head inside.

POSTER: "Don't put off for tomorrow what you can postpone until the day after!" Wise words, certainly. But, there's no flare in the presentation. It's not so much a poster as some sort of sign. Where are the borders or the fun lettering? I have taken it to heart but have they?

CONTENTS PAGE: Same Proof Reader as #127. Looks like there's fun in our future. Doesn't it?

LETTUCE FROM OUR READERS: Always charming.

Page 5! I've found it. "ANNOUNCEMENT" It's a little box that contains information on the CRACKED display program. Interesting. It even gives an address. All prospective displayers can write to me c/o the magazine and I'll get that to you.

CAPONY: This is a parody of some sort of Al Capone movie or something. It's no Godfather. I think that's all I need to say there. Lots of puns and similar sorts of gags. "Why'd you kill me?" "You brushed against my coat." "Sorry if I rubbed you the wrong way." & the appearance of the Sears-Robot's Public Officials on the Take Spring Catalog. It's an innocuous six pages. Good for a smile or two but with that "each panel is a gag that references a specific moment" rather than "We're going to tell a coherent gag-filled story." Sometimes they're fun; sometimes not. You can guess the side I'm dropping on.

IF TV CHARACTERS AGED WHILE THEIR SHOWS STAYED THE SAME: An excellent bit. One of the bright spots. We get to see Kojack (Gojack), Gunsmoke (Gunsmog), Medical Center (Medicine Center), Kung Fu (the always charming Kung Fuey) and Walter Cronkite and the Evening News (Walter Kronic and the Evening News) skewered. They all got old! But, the formats of the shows didn't! Bad toupees, poor eyesight, visible stuntmen and taking long naps are all here. Did the older generation know what hit them when Cracked came on the scene? The Walter Krnoic panel is particularly lovely. Hurrah!

THE CRACKED HISTORY OF MEDICINE: Earlier I made remarks about this issue not being up to par but there are two great bits in a row here. I guess the pointlessness of Capony affected my judgment. This is a funny journey through the history of doctors and all that sort of thing. Some bad gags but a few clever ones lighten it up. There is a panel stating that primitive man would use magic to try and cure people. So, we see a sick woman watching a man pull a rabbit of a skull. He asks, "Feel better yet?" Nice. The other bit that brought me to giggles was the early anatomy chart that consisted of a skull on top of a stick figure. We sure had a lot to learn! Four pages of joy.

Oh, it has finely been brought to light. The man who received the first ever medical injection was a Mr. Tenderbottom. It's worth knowing.

SOME CRACKED TIPS FOR WHIPPING INFLATION: Not bad but it's no "World Running Out of Space" from the last issue. Many of the gags are surprisingly obvious. Although, the newspaper as furniture bit and the clothing recycling gag work nice. In fact, there is one clever bit. "First run movies can also be seen for less by walking in backwards as the audience is exiting from the previous show." A couple is seen backing into an emptying theater. Of course, you'd still have to buy some sort of movie ticket. So, this one works when you've got two movies you want to see. But, in general, I can't work up much excitement for bits like "And you can avoid barbershop bills by cutting your own hair." followed by a picture of a man who has given himself a bad haircut and cut the collar off of his shirt. Let's move on.

LITTLE KNOWN FACTS OF THE AMERICAN REVOLUTION?: Two pages of gags that you'll forget when you turn the page. I had to write this one down: "The most unsung group of revolutionary heroes were the Boston Hourmen. ...they were just as brave as the Minutemen only they took a little longer to get ready." The art is fun and if you just look at the pictures the promise is great. Once you start reading, you want to flip the page.

But, when you do, you'll wish you'd stayed back there.

CRACKED LOOKS AT A SUMMER CAMP: Fewer gags on this spread than usual. But, they still aren't very good. Is there one about a long-haired kid getting his/her sex confused by an adult. Yes. You know what? I can't do this routine again. If you like this regular article, well, here's more of it. If you don't like it, take twenty seconds to scan and move on.

Holy Crap, there's a third page! More Summer Camp jokes. For some reason, however, this is the Most Charming page of these article I have encountered. Without the big caption on top and with a little less clutter, it is actually fun. Funny? Well, I can't vouch there but--If I were to make a CRACKED SUPER SPECIAL called "CRACKED LOOKS AT...", it would be one page long.

THE UNTOLD STORY OF HOW BETSY ROSS CREATED THE FLAG: Charming and funny. It consists of correspondence between George Washington and Betsy Ross. We see early drafts of the American Flag. We learn that U.S. originally stood for Uncle Sol Ross. This is why we read CRACKED for little bits of nonsense mixed with some good old-fashioned social satire. Some of Betsy's design are funny. The one that looks just like the Soviet Union flag was a laugh. Washington's writing "(I slept here)" under motel stationary headings is a good running bit. Who can argue when the smell is this nice?

An Ad for CRACKED binders and notebooks follows. I still have not received mine but I am a patient man--to a certain extent.

DISASTER MOVIES YOU MAY BE SOON SEEING: I will list the titles and you can decide the comedy value on your own.

The Towering Terrier Terror - A lot of dogs and poo jokes.

The Fingers of Fate - "A group of Vassar girls face a street lined with Rome's most notorious pinchers. Would they escape...ot would they get it in the end?"

The Towering Trash - Lots of garbage.

The Perspirin Adventure - "They were trapped in an elevator for 96 hours with nothing to eat but a stack of frozen pizzas!"

The Big Leak at the Waterbed Factory - Do I need to explain that?

SUMMER IS...: Insert my "Cracked Look at Summer Camp" review here but eliminate the bit about the third page.

POLICE LADY: "Police Woman" parody. I will admit that I have not seen the show and my DVDs of Season One have been delayed. But, after reading this article, I think I'll be all right. 5 pages of an incompetent police lady. She's got a lot of hair and she combs it a lot. I have a tough time getting worked up about this one. Luckily, I see Nanny Dickering on the horizon.

CRACKED INTERVIEWS THE STUNT KING: Who is Nancy Dickering? This is not the woman I know and love who tackles the big issues. This is not the larger-than-life Nanny I've known for so long. This is, I don't know, her sister? Well, regardless, it seems to fit the overall blah tone of much of this issue.

Her interview isn't even an expose. It is a series of jokes about a stunt man and all the day-to-day craziness he goes through. Nancy is clearly enjoying herself but there's nothing to push at, nothing to expose. It's fun but there's no "Oomph!" to it. Bring back my Nanny!

SLIDING DOWN THE FAMILY TREE: A brief bit on Sylvester's family tree. Thomas Smythe, the man who failed to invent the first light bulb but did discover the first crew-cut through hilarious situations involving electrical shocks and such. Always a welcome addition to an issue.

This is followed by a Sagebrush cartoon and a Knights 'n' Daze strip. Fun? Yes. Let's carry on.

The Back cover contains a "Great Moments in Journalism" gag about organized crime. It's all right. Maybe they should rest on the organized crime gags.

#129 - We welcome a certain famous shark to the column. Stay tuned!

Translated by Del Berman
Cover image from www.millkern.com/deverett/cracked/index.html
Posted by Turbot's Finest at 7:27 AM