Cracked #130: Times are Getting Good! 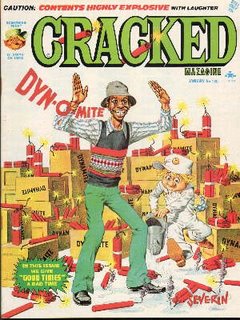 The cover says it all and leaves me with nothing to say.

You can hear the creative engines beginning to kick into Over Drive! We are not where I think the True Start of The Glory begins but we are so close. Mr. Sproul and the Crew are sharpening their wits. They will unleash a torrent in a few issues from now. Have you brought your rubbers?

POSTER: "Will All Those People 6' and Over Please Move so that the Shorter Folk Behind You May Read This Poster!" What can a critic say? Ha Ha!, perhaps?

LETTUCE from our Readers: October 31, 1975 is Sylvester P. Smythe Day! So far no drop-off in the sheer Like people have for this mazagine.

GOOD TYMES: They are poor and they are funny. I had to wipe the sass off of my pants after this one. They're eating cardboard boxes, renting their couch out to lodgers and being visited by Mr. Fred Sanford. What a family! The TV skewering continues strong with this natural outgrowth of the sort of stories that Good Times used to tell. Things get really bad but really goofy. In the end, things seem to get better but they stay about the same. Throw in a couple of those 45-year-old CRACKED jokes we all know and love (Jaimes, the dad, announces that everyone has to go out and get jobs. He hypes everyone up by saying the rather stilted line, "O.K., let's all get out there and pitch." Mykal looks at us and says, "I thought we needed money. Why we gonna' go out and play baseball?") Thank you, CRACKED, for making us laugh at and with the desperately poor people living in America.

CRACKED'S GUIDE TO SHARKS: Great art, great jokes, great bit. Although, you might be forgiven for forgetting that sharks are only in the water. The fear spreads to dry land and even into apartment bedrooms here. There is a wonderful section called "Humans Can Learn From Sharks". This bit has Sproul smeared all over it. He teaches as he makes us laugh. This sort of call-back to a famous movie or TV show would be perfected in the next two years. Enjoy its humble beginnings.

THE NON-PEOPLE POPULATION EXPLOSION: What happens when insects, plants, rhinos, dogs & cats and fish populations boom? Well, one theory is that they will have more TV shows geared towards them. My favorite: "Sanford and Cat". Remember when everyone had a pet rhino? What happened to all of them? Zingers and satire mix together to make a creamy filling that I can't get enough of. They are cooking in this issue! I can't say enough about it.

A PREVIEW OF CRACKED'S NEW TV SEASON: Well, this one is mostly fun. We see the names of TV shows followed by drawings that literally present the titles. The "Six Million Dollar Man" drawing is of a bank president counting money. "The Jeffersons" is a drawing of Thomas Jefferson and his wife. Things like that. A fun scanning bit but not a lot of kick. Everything can't be gold. They do have a writing staff and everyone gets their turn. Even the ones who are terribly, terribly unfunny.

THE MONSTER: A quick one-page comic strip thing with Godzillla eating things and then getting indigestion. Satire of some kind? I've read it eighteen times and I can't quite tell.

DEVELOPING A NEW PRODUCT: Turkey Cola! (Original Name: Hitler Cola) We go through each CRACKED Step in developing this awful product. From the lab to the executives to the advertising to the pummeling down your throat. The satire content is high in this issue as they sock it to everybody. Love the art.

THE CLASS REUNION OF 1985: Instead of a CRACKED LOOKS AT this issue, we get this. Everyone from the 1975 TV line-up at a big party. Big Bird talks to George Jefferson. Kojak is wearing a lovely wig. Strangely enough, the jokes are no different from any other CRACKED LOOKS AT Article. You'd think they would be but they're not. Well, I guess that's what makes it HOT STUFF! Oh yes, Lawrence Welk is there so tell your friends.

THE FRENCH COMMOTION II: One great joke involving a flying leap. The rest is a slightly salty lozenge. I didn't laugh but I did have fun reading. It's got a decent flow although it does get interrupted here and there. I've noticed that on occasion they are so intent upon hitting the gags that transitions from panel to panel can be non-existent. Here is this character in this gag. Next panel, they are over here. If you know the movie, it's fun. If you don't, you wonder where the bit of story went. This will not improve as the magazine's rate of gaggery increases. (By the way, what happened to all the heroin?)

CRACKED GUIDE TO SKY DIVING: Standard fare. The captions, the pictures, the gags. Four pages is the perfect length for this sort of thing. A very funny drawing of a fat man at the end makes it worth your time. They have done better guides. I learned little.

An Ad follows for CRACKED ANNUALS.

THE CRACKED GUIDE TO PLANT CARE: They should just publish one big guide with all these little guides inside. The issues later on will break this sort of thing up. Two guides with the exact same style and presentation of humor is a bit much. Luckily, the puns are strong and at three pages it's a breeze. Maybe I should consider doing my own reshuffle of the articles in this issue. As we pull towards the end, it is dropping off a bit. Like a weak Side 2 of a good album.

CRACKED'S CHEAPER METHODS FOR POWERING AUTOMOBILES: Six new ways of powering cars when the price of gas skyrockets. One involves manual laborers pushing from an abnormally large trunk. One is "The Hamscar". It's filled with hamsters (that look like mice). Get it? "The TNT Car" is self-explanatory. Garbage cars stink but zoom along. There is a car powered by H2O that needs to be seen to be believed. And, "The Eleband Mobile" involves an elephant. 'Nuff said, Jack? Enough charm here to keep you smiling.

Oh, look! Another ad for those binders and notebooks I never received!

CRACKED INTERVIEWS THE SPORTS KING: Her name is Nanny but she looks like the gal from a few issue back. She's not as voluptuous as we know her. But, she does trim the Sports King a new one. He rips off a lot of people promoting his sporting events and Nanny with the help of her bell-bottoms exposes it all. There's a lot of violence in the sports world and she looks at all of it. In the end, she does it right but I wished she looked a bit different. Where is my Nanny?

BACK COVER: Great Moments in Aviation. It's funny. It's flight.

The are still having problems with the order of the articles. Too many similar bits crammed against one another. One wishes that more bits had new jokes rather than the same ten bits of shtick recycled over and over but that's CRACKED for you! Overall, a solid issue. A slight improvement over the previous one but not where we want to be. Yet.