#157 - The Covers are normally so inviting 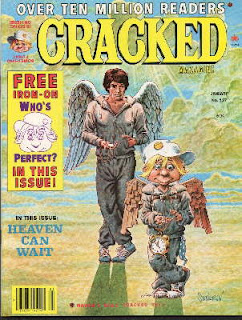 Well, the cover is "Heaven Can Wait". There's Warren Beatty. There's Sylvester. I gotta say that I'm really not that thrilled when Cracked covers remind me of Mad. I know they were basically a ripoff but I don't really like Mad. There are things Cracked does that are pure Cracked. That's what I like. When they put popular movies from the time on the cover that folks could really care less about now (or that haven't entered the popular culture), I get tired. Let's see if the insides are more delightful.

POSTER: 1-pager "Due to lack of interest, next week has been indefinitely postponed." I'm not sure where you would hang this. Did 13-year-old boys have their own work cubicles in November 1978? That yellow background really distracts.

TABLE OF CONTENTS: I see Jimmy Carter and a man with a plunger. That's promising.* Imogene E. Uss - Guess what member of the staff that is?

LETTUCE FROM OUR READERS: Next issue - December 19 There's a letter here where a guy says he liked their parody of High Noon from a few issues back. He asks if they'll do more. They tell him to flip to page 39. I've always wondered... How long does a letter like this sit around before they use it? "Hey, we're gonna do another Western-type spoof. You still have that letter from that one guy." "Sure. Put it in there. It'll make it seem like we take the reader's requests." "Excellent, Mr. S!"

HEAVEN'LL WAIT: A thoroughly average parody of a tremendously average remake of a decent film. I remember this film being one of the first times I had heard how absolutely great a film was and then, when I finally saw it, I couldn't see what all the fuss was about. I rarely laughed. I was kind of bored. The whole thing was somewhat underwhelming. And I was, like, 10 or 11 years old. Part of me thinks I was too young. Part of me knows I was right: This movie was overrated. I can't draw up much strength to read a parody. It just reminds me of boredom and disappointment. Next!

FAMILY TREE PEDIGREE: Genealogy Bop! It starts at a party where folks joke about their family trees. It then proceeds to in-depth reporting on how people find out about their ancestors. There are jokes about old people getting drafted and families accused of being witches. There's a funny page on different coats-of-arms. The jokes feel old although they aren't really. All right, this is Cracked. This is the Cracked we know and love. I'm not laughing but I'm smiling.

CRACKED EXAMINES TELEPHONE ANSWERING MACHINES: Did you know that the answering machine was invented over 100 hundred years before the telephone? Did you know that people screen their calls through the machines? Did you know...so many wonderful things? This article's all right. It's all about the way folks use their answering machines to make themselves seem more interesting or important. Laughs? One or two. A quick, breezy read.

BRINGING NILE STYLE TO THE POTOMAC: Make everything in Washington D.C. into Egyptian stuff. Jimmy Carter gets a tomb shaped like a giant peanut! Use a system of bartering! It might involve back issues of Cracked! Spend some time under the Tax Shelter Pyramid! All these things and more are ours in this rather half-baked article that never quite takes off! Oh well...

SNAPPY INSULTS TO STUPID STATEMENTS: I'll take one example and you can judge from there:

A guy is yawning and stretching in the foreground. Our "Snappy Insult Man" (I call him Mortimer) is in the background.

Yawner: "I'm not lazy."
Mortimer: "You love work - you could sit and watch it all day."
"The only exercise you get is by watching horror movies and letting your skin crawl."
"You stick your nose outside so the wind can blow it."

This is why CRACKED is the best around, best in town.

THE BOOK-A-MONTH CLUB: Very cool two-pager. It looks exactly like a "Book of the Month Club" ad. "Heidi Gets a Hernia" & "Charo's Guide to Speaking Gooder English" are my favorite titles. It has all the elaborate rules that made people end up buying tons of books they didn't want. This is a good article. Where'd it come from? It's higher quality than the stuff around it (although that stuff has it's charms). Did they rent this out from someone else?

YOU LIKE TO LIVE DANGEROUSLY WHEN: You print an article that looks like it may be a reprint from 1962. One page. Harmless. "...you ask the boss who that ugly broad is in the picture on his desk." "...you practice juggling with your Mother's best china."

STILL MORE FROM THE CRACKED LENS: It's three pages. It's got some laughs. If you like The Cracked Lens (and what fan of Cracked dislikes it, I wonder?), then this will keep you happy for a while. One of the frames is from "The New Treasure Hunt" game show. I remember that one with fondness and love.

CRACKED'S I'M O.K. Test: Stuff like "Are you reluctant to meet new people?" being asked as a man is shoved into a cell with tough looking characters inside. "Do you ever get the feeling that you're being followed?" is asked as a robber is being chased by a gang of cops. The basic joke layout is obvious. Contradictory drawings and questions. But, the "O.K." angle makes it a little odd. You calculate everything and learn whether or not you're "O.K." I'm a little confused on the whole concept. The article has some nice moments but, like the Nile Style article from earlier, it feels like one person had an idea and someone else finished it. But, the second person didn't quite understand what the first person was getting at.

PHOTOON: These are always fun. A one pager. A joy.

TV CONTRAPTIONS WE'LL SOON BE SEEING:
-Built-In TV Repairman Lie Detector
-Micro-Mini Set (behind your eyelids for sleeping)
-Fan Participation Set (ejects a football when your team scores so you can spike it)
-TV Brain Stimulator (jolts your brain to keep it alive during TV day)
-TV-News-Show Picture reducer (makes the news really small)
-TV Editor Set (edits all objectionable material out of shows)
-Magnetic Set (a magnet attaches to your ass so the TV follows you around)
-Audio Canned Response (adds applause and laughs to politicians speeches)
-Obnoxious Personality Eliminator (blacks out audio and video for people you hate)
-Automatic Distorted Picture Corrector (a big boot that kicks reception back in)
-360 Degrees Screen (Run around The Fonz)
-Video Message Flasher (Better than yelling at your kids)
-Program Standby Device (You stop the show when you have other things to do!)
-Video-Disco Simulator (This may have limited use.)

THE ADVENTURES OF THE MASKED BANDITO: It's got really fun art and it's six pages long. I don't know if I laughed but I enjoyed it. It's Zorro-esque with Tonto included. It's not as great as the Beach Party parody but it's got its charms. Actually, I may be overpraising it. It's a good read but nothing spectacular. There---I may be under praising it. Or, maybe, I don't know what I'm talking about.

CRACKED INTERVIEWS THE APARTMENT KING: Mr. Len Lease=shady. Nanny=pulling down the shade! Nanny does it. She goes in with her chest out and exposes the chicanery. He has small apartments. He recycles washing machine water from load to load. He is a load. $300 fine for walking on the grass! But, there is nothing but grass! Love it! Sometimes Nanny really makes me smile.

There is an iron-on. "Who's Perfect?" Sylvester has two sets of eyes! I wonder how many boys got beaten senseless with this on their shirt in 1979.

BACK COVER:
Happy-Daze Shut-Ups
The Fonz, Potsie, Joanie, Mr. C and Ralph. My my, this is how you end an issue.

A decent issue. It has its moments but is missing a bit of that "crack" that I love to see from "Cracked". It is worth it, though, for the Book of the Month club and the back cover. Joy!

Next issue: Now, this is how you do a cover...apart from the background color.

* I wrote it but I don't know if it's meant sarcastically.
Posted by Turbot's Finest at 9:07 AM No comments: