CRACKED #156: I think he got confused because the word has two meanings 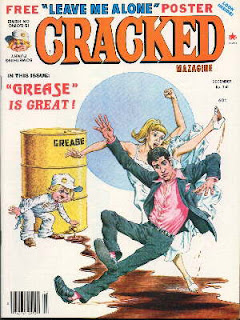 Come on, Travolta! Great cover. Sylvester seems to be hurting the stars of Grease on purpose. I've wiped my feet. I'm stepping inside. Join me.

POSTER: "Danger! Radioactivity!" And, on the bottom, "Do not enter. I am listening to the radio!" Not bad. Definitely yellow. Bright, bright yellow.

TABLE OF CONTENTS: "GREASE is the word! But Sylvester is taking it too literally!" I still think he looks like he's having fun doing it.

LETTUCE FROM OUR READERS: November 7 - Next issue. Finally, there are two pages here. I'll try to scan them so you can wallow in it.

GREASED!: 7-pages of parodies with various Happy Days characters making cameo appearances. There a whole mess of songs, with my favorite being:

A great tune about how no one here is a teenager. The parody moves very methodically through the entire movie. I've seen the movie. Saw it in the theater. It's fun. This parody made me relive it. To be honest, there are other things I would have preferred to relive. Regardless, it's a decent parody to start us off...

FUN CITY OLYMPICS: "Why New York [City] lost the 1984 Summer Olympics" It could have had something to do with the new events they proposed. 1) 100-Meter Mugging 2) Short Person's Jousting 3)Team Looting 4) Two-Mile Run Escape 5) Fencing (You guessed it) 6) Pedestrian bowling. People get hurt. Monsters show up in Central Park. It's all great. So, what exactly was the reason why Los Angeles won the 1984 Summer Olympics? I have a feeling that might be funnier than this.

PHOTOON: This is a great photo-panel one-page gag. It's actually rather complex. What magazine is this? Oh, still CRACKED. Hmm...Where'd this come from?

THE CRACKED GUIDE TO SAILING: Oh yeah, this is CRACKED all right. Problems with wind and sharks and alligators. Sailing around but not accomplishing much. A panel says "...you might want to race your boat." Yes, a man is shown racing a boat. The final panel is a man in an above-ground swimming pool in his sailboat. Matter-of-fact captions followed by goofy drawings. This one isn't doing much for me. I don't know why. Pretty average.

IFFY U.F.O. INFO: A great magazine on U.F.O. culture. There's some real verve here. A great article on how to take photos of things like Frisbees and crop the photo to make it look like a U.F.O. There are ads for official looking badges that you can show aliens when they land. We have "Eyewitness reports" from farmers, hippies and dogs. Stuff like that. Quite charming.

This issue is really mixing up the fun with the blah. There is a CRACKED formula in here somewhere. I will weed it out.

THE CRACKED WORLD OF APPLIANCES: MAD! Check Issue #57! There's going to be a 4-page hole in the center of it. I know where those four pages went. This article is four pages of old jokes about kids playing in refrigerator boxes and wives buying freezers and lots of meat and then going out to eat because everything is frozen. It's nostalgic fun now but would I have thought that when I was 8 or 9 and first reading this? Strangeness.

CRACKED PRODUCTS FOR EVERYDAY USE: Strange products with a touch of CRACKED. "Smoke Away". When you light up, point Smoke Away at your face. It sprays you with water. "Doggy Plasti-Coat" It covers your dog in plastic so it can't get dirty. "ICE-O-BERG" A giant iceberg and a giant ice pick for your evening drink. Stuff like that. it's two pages long and I can't quite figure out the point but it's OK.

ONE AFTERNOON IN THE PARK: An old man feeds pigeons in this one-pager. I liked it.

MORE OF THE CRACKED LENS: Two pages of photos with funny inside! Good stuff. I always enjoy these.

POPULAR SONGS FOR EVERYDAY WORKING PEOPLE: Mad! Come back! There's more. Chemists, babysitters, teachers, chimney sweeps (?) and others get songs about them. The Taxman has one set to "I've Been Working on The Railroad". Never liked these sorts of articles. They are two word-heavy and in order for them to work you have to sing the lyrics. And, the lyrics are all pretty inane. It's too much work for too little comedy reward. And, there's always a song I don't know in here.

THREE'S CRUMMIER: It rightfully points out that Three's Company has a lot of shtick and innuendo in it. Rockford and Hugh Hefner show up for some reason. And, it goes along touching upon all the cliches of the show. You know, I've said this before, I've read it but I can no longer remember it. I think it goes on a bit too long. And, it borders on MAD-overcrowding. Too many people saying too many things in each panel. Not bad but nothing spectacular.

CRACKED INTERVIEWS THE PSYCHIC KING: The psychic king is actually a woman who looks a lot like Nanny. She seems to be a fake at first. But, then, she looks like a real psychic. The two of them stroll around town and do psychic stuff like finding missing persons. This issue is real MAD-like. Too mad like. It's dragging the issue down.

I'm swimming in a thick stew of CRACKED and I don't like it. Let's get back on track, guys.

BACK COVER: LANDING ON MARS - A funny one-page no-dialog comic finishes the issue.

This one is not a favorite of mine. There are some great bits: Photoon and the U.F.O. thing. But, much of it is endless. I'm slogging through this one and I wish it was lighter and airy and funnier. What's next? I've forgotten. But, I do think it will be something better.

Next issue: I don't remember!
Posted by Turbot's Finest at 8:48 AM No comments: