CRACKED 158: Galangasleeves! If you know what I mean... 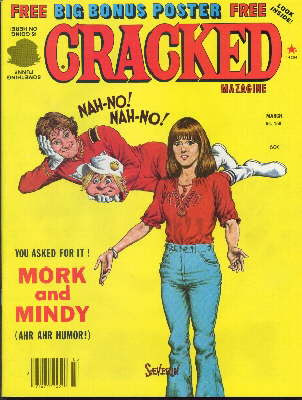 Hey! It's Mork! And, he's saying "Nah-No! Nah-No!" I'm afraid I cannot stop my sides from splitting. Look at the color of that cover! It's that yellow color that all the posters shine in! Is that an attractive color? I would have thought something warmer might grab the eye! Bright sun-yellow must have been a 1979 thing.

"If at first you don't succeed...try something easier!" Yellow is the new funny. Thanks for the poster, Cracked!

TABLE OF CONTENTS: Mork it up, Mama! This is going to be great. Let's rush in!

LETTUCE FROM OUR READERS: January 30th - Next issue. Two pages of letters like this: "I don't think you print real letters from readers. I think you make them all up." Hey! That guy's a jerk! You don't talk to CRACKED like that!

MORK & MINDY: So good they didn't even fiddle with the title. If this came out around December 1978, then Mork-mania was at its height. The first season of the show was halfway done and it was in the top five shows. Network fiddling would immediately make the show begin to plummet with the start of the second season. But, for now, the show is the bee's knees. Shickba! On Sunday, I watched an episode that involved Mork racing the Roller Disco Champ of Boulder ("Dueling Skates" from Season Three). I didn't laugh but I did a few times at this CRACKED parody. Way to go, guys! And, is there much about this parody that is actually a parody? It seems to be a straightforward episode of the show. Interesting...So what is it if it's not a parody? I don't know but I smiled so that's worth something.

CRACKED'S GUIDE FOR SPOTTING SELF-LOVERS: Two pages of stuff like "You send yourself telegrams on your birthday" and "Your phone doesn't ring--it applauds!" I'm not sure what this is doing here. CRACKED is not known for stellar pacing of it issues but this is so out of place after M&M that I forgot it was here until I reviewed it now.

AND STILL MORE FROM THE CRACKED LENS: They must have known how lame the last article was after all. Three pages of "gigglers!" There is a still from the 1974 film Deranged in here. Ed Gein and Cracked--A Potent combination!

"The Villain" - Great one-pager with a funny closing panel. Nice...

A CRACKED LOOK AT PHOBIAS: Dr. Ludwig von Ludwig shows us some phobias. Then, he shows us how he cured a woman of allurophobia (cats). This section has a strange panel that I don't quite understand. Normally, there is a joke in every panel, unless it's an obvious set-up. Well, this panel isn't a set-up. Dr. L is showing Mrs. Horsenagel a stuffed cat. "Come one Mrs. Horsenagel...pet Kitty...come on!" "What's her name?" "I just told you-Kitty!" Is that a joke? Is there a joke there? Regardless, it ends with some little known phobias:
Naborphobia - "A fear that Jim Nabors will suddenly appear on your TV screen."
Seedaphobia - "A fear of seeing seeded rye bread."
Those are my favorites.

SPECIAL INTEREST AND DIGEST MAGAZINES: I think that's the way the title's meant to be read. It's a little awkward. Unless...it's not an article from 1979. The art does not look like Severin's drawings from this period. They look like his stuff from the 60's. But, it does mention "Jaws" so I guess I'm wrong. It is humorous. Two pages of fake magazine covers for things like "Toy World" "Shyboy" and "Junk Food Reader's Digest". Worth a read. Why isn't this article listed in the Table of Contents?

CRACKED'S NEW SOON-TO-BE-A-FAD DIETS: Two pages of goofy diets. The Yankee Doodle and Water Diet is a good one. Go in the shower with your clothes on. Put the water on Super Hot. Dance around singing Yankee Doodle. If you get thirsty, drink some water. Do this until you're too tired to eat and need to sleep. They're real silly and fun. The Library and Egg Noodle Diet is another fun one. Make a batch of egg noodles and drain out the water. A friend takes the noodles into the library and hides one noodle each in a page of different books. You run through the library and when you find a noodle you eat it. Good stuff.

CRACKED TAKES A LOOK AT THE BIG CATS OF THE BIG TOP: Two pages of jokes about lions, tigers and lion tamers. And, holy crap, some of them are funny! Have they got new writers in for this issue? My favorite jokes? Thanks for asking. The tiger who lights his cigar on the flaming hoop. The lion who jumps through the hoop. It turns out he's two guys in a lion suit and the bottom half gets left behind. The lion who fights the lion tamer with the whip and the chair. The lion grabs the chair and has a seat.

We are cooking along here.

TESTIMONIAL ADS THE WAY THEY SHOULD BE: Reminds me too much of the magazine shtick from earlier and it's not as funny. Bookies on the phone. Mechanics ripping people off. Stuff like that. Let's move on.

THE CRACKED GUIDE TO HORSEBACK RACING: Some funny bits here. I'm looking at it, trying to pick out some great bits but it's stuff like "Buy your horse new shoes". And, you see a horse in sneakers. "Put them in horse shows." We see two horses doing Romeo & Juliet. Stuff like that. You know how it works. I'd really been enjoying the short articles and swift verve of much of this issue. This article would be perfect at two or three pages but four is too typical.

YOUR DENTIST IS YOUR FRIEND: Dr. Gingivae tells us all to go to the dentist. Everything he does is related to teeth (reading Jaws, visiting the home of the man who invented dentures, a dentist chair in his living room) and he smiles a lot. In the end, it turns out...[SPOILER AHEAD]...He hasn't been to the dentist in two years! The punchline isn't great but it's a smiling two-pager.

PHONE SERVICES OF THE FUTURE: "Dial-An-Insult" "Dial-a-Patsy" "Dial-a-Proposal" We read the description and then see it acted out. The man proposing by phone to his girlfriend who is sitting right in front of him. The man holding up the phone to insult his wife. Henny Youngman, CRACKED has your gags! They're storing them in Issue #158! Only two pages, though.

NIC BAD NEWS RAZOR: A very funny one page ad with an actual person in it. It's an ad parodying the new disposable razors that came out around this time. Apparently, they weren't that great. "If you blow into the handle of the New Nic Bad News Disposable Razor, it Whistles!"

LUE GRUNT: Oh well, let's wind down. We're back in normal CRACKED land now. I've never seen Lou Grant so I had a bit of a tough time paying attention. It's all about Lou trying to get a big story. There's a fat lady making pasta that's pretty funny but apart from that it's standard parody. A few smiles and a bunch of groaners. It's not bad. It's just not as funny as the Mork & Mindy article.

CRACKED INTERVIEWS THE HEALTH NUT KING: Nanny isn't really exposing anything here. She is just hanging out with Mr. Al Phalfa whose entire family is involved in every health fad around. He does try to charge Nanny for a seaweed shake in the end (because they're so busy being healthy that they don't have jobs) but he's not a shyster. They are trying to stay healthy; they're just a bit goofy about it. 8 hours of jogging everyday. They take 47 vitamins a day. They put filters up their noses for fresh breaths. Stuff like that. It's not really that funny because not everyone can have Nanny's figure so I'm slightly confused here. It's not hard hitting journalism. What is it?

Total - Sherlock Holmes is in this one!

BACK COVER: Something about a cannibal eating his neighbors. It's fun.

Apart from the slips back into "Regular" cracked style articles, this is a great issue. Filled with all sorts of little bits that are pretty darn charming. Well done, Cracked. Let's keep this up.

Next time: To outer space...again!

THIS BLOG SPONSORED BY: 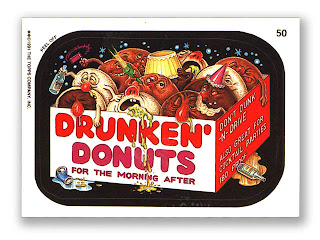 Posted by Turbot's Finest at 9:46 AM No comments: