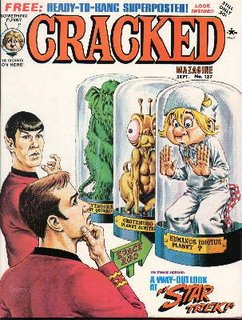 Cracked #127 has this wonderful cover that never fails to elicit a chuckle from my person. Poor Sylvester is at the Space Zoo! How did he get there? Sylvester, what have you done? Looking on, we find the stars of our Main Feature this issue: Capt. Kirk and Mr. Spock from Star Trek. Let the September 1975 issue commence!

I will admit that although the joke is not new, I found much humor in the wryity of this month's poster. It reads: "Ignorance is Bliss" in large letters. But, then it throws in the Cracked Kicker we have come to expect. "...so how come more people aren't happy?" Indeed.

Lettuce From Readers? Charming, as always.

We begin with a TV parody: Star Tracks. At this point, the original Star Trek had been off the air for 6 years but syndication had made it something special. People watched the show over and over again. Cracked knew this. They sent us a Zing-Express Delivery! I think the first joke sets it up for us. Mr. Spock sneaking into the ladies room. "...tiptoeing boldly where man has never gone before." Mr. Spock, let us join you.

The plot involves Kirk, Spock and the redoubtable Bones landing on the planet Change. When the trio return to the Starship Centipede, they begin to change. Spock's body beings to fall apart, beginning with his trademark ears. Kirk starts to become a woman. (He does do his hair.) Bones gets acne. Along the way, we get jokes about reruns and an impenetrable scientific explanation for the change from Bones, which is translated into "take two Tums".

Before the motion picture (and before Star Wars) and The Next Generation, this satire plunks it down hard on this charming, beloved show. The final panel shows the characters on the planet Cancellation being honored by Gomer Pyle, Don Rickles, Jackie Gleason and others. "We're the only survivors of a cancelled program ever to be shown more times than 'I Love Lucy'!" Well done, Cracked. A biting and funny introduction to the issue.

"When The World Runs Out Of Space"
Four pages of overpopulation jokes ranging from the pointed to the obvious. A few favorites are the triple-decker chair and the balloon homes. The real kicker in this article is the last page. When every place in our solar system is overpopulated, the government will begin advertising campaigns inducing people to leave this world, permanently. A bit darker than the regular Cracked fare. There is a crackle of black humor here. The "Sterling Silver Russian Roulette Kit by Tiffany", which is a gun with bullets, is dark. And, the "Have a Blast/ Throw a Bomb" encouragement for terrorists can take the uninitiated reader aback. (I am still afront.)

"If Other Industries Gave Rebates"
Basically, two pages of companies following the auto industries rebate policies. The article seems to be missing a page as it never really takes off. It's mildly funny but I will leave you with the best joke and save you time. Brandex Tissues: If you buy 10 boxes, you will receive "A free nosehair from a stage, screen or TV star. Now, there's a deal worth nosing into!"

"If Newspapers Carried Pictures To Match Their Headlines"
A joy. What Cracked does well done well. Big headlines with literal translations of the words in picture. So, yes, we get "Mugger Beats Two Women With Bat". A man is shown attacking two women with a vampire bat. "Poles All Over Road After Storm". A Polish Marching Band is scattered across the street. "Guerrillas Attack Army Camp" is perhaps too obvious and, obviously, wrong. But, you will giggle when you see "200 Attend Airline Talks". Wonderful. If this is being Cracked, don't spackle me!

"Monopo-Oil"
A pointed satire on the Arab/OPEC control of the oil wealth of the world through a funny Monopoly parody. An example of the "twist": "TO START THE GAME--Each player is given ten billion in petty cash, fifty wives and five goats. The player who shouts the most stirring battle-cry against Israel gets to roll the dice first." And, you still believe that only Mad went to this place? The Punchline sends it home when a letter from the Publisher requests no more articles "...about the Arabs buying up the world". And, the new Publisher is an Arab! Boys, let me give you your Lifetime Achievement Award in Wacky!

Followed by an ad for The Cracked Bookstore. I have ordered Cracked Goes West and Those Cracked Monsters. The prices are, how you say?, reasonable.

"You Know You're a TV Addict When..."
Schtick! Lots of gas on this 2-pager about people who really love TV. Uneven, sure but worth it for the "...you think you're a minority expert because you watch 'Sanford & Son' and 'Chico and the Man'." The pictures are fun but the gag lines don't always add up to a one-two punch in your groin.

"A Cracked Look at a Racetrack"
Well if you felt a trickle of Schtick run down your leg during that last article prepare for the chum bucket to be dropped on your head. Apart from an appearance by the Frankenstein Monster, this is the usual blah blah blah. You know my feelings on this running article. I don't think it's worthy of Cracked. The cluttered two-page spread with funny-looking characters (admittedly) speaking age-old jokes brings my dander up north. I usually start in the upper left hand corner and read quickly. This time around all I was left thinking was "Why are there so many more gags on the left side than the right?" Maybe someone knows. I don't want to read it again.

"Airplot 1975"
I recently acquired the Terminal Pack of Airport Movies on Digital Versatile Disc. They are charming. This parody is a mixed bag. The Star Trek opener was so high up. But, it works because it was an amalgam of a TV show. The more-specific movie parodies can leave me in the dust. Here's what I learned: These films have a lot of characters. (But, where did the lovely Beverly Garland go?) The plots are contrived. Karen Black has crossed eyes. Of course, I've said before that I can never get enough George Kennedy and this is no exception. A quick read. There are some laughs for those of you who enjoy such things. But, the movie is goofball enough on its own. Cracked does not step over that line. They should. I am waiting.

"Cracked Takes A Spinoff"
Genius! As sublime as Goethe's Faust. (Changing the lead character of Good Times' name to West Virginia made my beret fly off my head with mirth.) We start with All in The Familiar--to Mawde--to Good Tymes--back to All in The Familiar--to The Jeffonsons! They spin Norman Lear(y) on the comedy spit. But, the true magic of this article comes in the spinoffs "one step further". Arches' grandson (Arches Jr.) will have a spinoff with his dog Flash--"The Adventure of Arches Jr. and his Faithful Friend Flash". They live in a cave. Eventually, posits Cracked, the dog will get his own show. Then, the cave will get its own show. This article reeks of the writing style of Unda Edjakated. Wonderful. Other spinoffs are brought up but--my Favorite? The spinoff involving the Native American cousin of the Jeffersons entitled "White Cloud and the Chicken". The Native American cousin will have crazy adventures with a giant chicken. I love it! More, please. (I did note that the Jeffonsons changed back to the Jeffersons halfway through. Oh, Unda!)

"The Cracked Guide to Self-Recognition"
Let the comedic doldrums begin. Padding Thy Name is the next four pages. Similar to the TV addicts bit 15 pages ago, this article as a "You Know You're too Fat When..." & a "You Know You're too Skinny When" Oh, comic desperation! The fat people look funny and there's a skinny guy's butt on display as he goes down the drain but nothing else of interest.

"A Teenager Is..."
Exactly the same as they were back in 1968. An article full of stale gags that feels a lot like the previous srticle. Maybe more rebates would have helped. Think of your obvious teenage joke and it's here. The girls talk on the phone and shop. The boys are dirty and eat a lot. Yawn...Where is the comedy?

An ad for 3-Ring Loose-Leaf Binders and COIL-Bound Notebook slices through the monotony. Joy!

"Cracked Interviews the Resort King"
Nanny, you have saved my funny bone!
What is Nanny doing? Interviewing Irving M. Gabonza, owner and manager of Sleepy Acres Resort.
How does she do it? Hard hitting and getting right in the thick, as always.
How does she look? Russ Meyer would be proud. And, frankly, I can't stand up for fear of rupturing my $250 Parisian trousers.
Sleepy Acres is a rip-off. I note that I cannot find Mr. Gabonza's resort on line. Nanny did her job! Each panel reveals a little more of the sleazy tactics that make resort vacationing in the Summer of 1975 so tough. This Resort King is a goofball! Way to go, Nanny!

The Back cover contains a charming cartoon called "The Curious and the Modern Sculpture". A decent ending to a frankly uneven issue.

They have done better and would do better over the next six months. The fatigue America felt before the bicentennial is beginning to show in our beloved magazine. When they were sharp, they'd slice a hair in half. But, there's too much filler here.