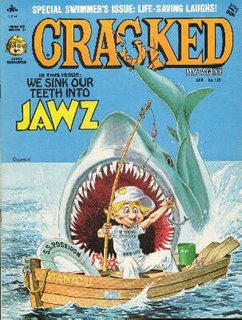 The slump that seemed to be approaching us is slowly being averted. The New Cracked Bicentennial Excitement has not yet arrived but this issue picks it up and starts the ball rolling.

Starting with the COVER, there is a renewed verve. There's no real joke here but it is a great image. Sylvester is on a "Titanic II" lifeboat with a S.S. Poseidon Life Preserver. The fish exists in that strange silent zone that Chaplin and Keaton used to live in. Sylvester won't hear him until a moment later. Frankly, it will be too late. But, luckily, Sylvester only exists in moments and at this moment, as his shirt says, "If You're CRACKED, You're Happy." We will see you soon, Sylvester! (It is very lonely behind him though.) Well done, Mr. Severin!

The POSTER: "Avoid Shark Attacks" in big, black letters on a yellow background. At the very bottom, flanked by large arrows, is the Patented "CRACKED ZINGER"! "Get Hit By Lightning!" Even though it is very tiny, it too has an exclamation point. Lovely!

TABLE OF CONTENTS: Why are these always out of order? Regardless, Dick Shunary is this issue's "prufe readuh". Away we go!

LETTUCE FROM OUR READERS: Fred Gorkle gets it in the shorts again! People still like the magazine (or mazagine). The next issue comes out on October 15th, 1975. Where were you?

JAWZ: As I've mentioned before, I am not a huge fan of the movie parodies. They are too specific. If you haven't seen the movie, they become a series of gags about set-pieces or character quirks that can go right over your head. Luckily, Jaws is pretty universal. Everyone seems to know at least something about this movie even if they haven't seen it. The article is consistently amusing. Oddly enough, taking a final gander through, I don't see a single bit that makes me actually laugh and yet I don't dislike it. That would be a CRACKED tactic over the next few years. They aren't really kicking at the movie. They sort of gently poke it. The tricky thing with this parody that they would perfect later on is that the artist doesn't seem to know that the writer is gently ribbing the movie. A lot of the panels are really frenetic but the gags are little light zings. For some reason thought, it is quite charming. A strong start for the issue.

HOW COLLEGES CAN ATTRACT NEW STUDENTS: Buddy Hackett, big-boobed gals and, oddly enough, rickshaws litter this bit. Pampering kids to the point of indolence and reducing education to a legendary activity is the premise of this article. The guy who draws Nanny Dickering really went to town here as there is a woman who looks like her in every three panels. Not a hoot fest but at four pages it reads quick.

THE CRACKED GUIDE TO BOATING: You know that I love this type of article. CRACKED carry me away and teach me about these wonderful hobbies/sports/activities! Yes, breath easy! There is a joke about a person bringing Life Savers candy on a boat thinking that they can be used as Life Preservers. If our civilization collapses and all that remains for those giants who follow us is this magazine, they will get a veritable encyclopedia of gags we loved. Here is one. In my copy, it is circled with a smiley face next to it. Dickie and Mildred have a boat. It springs a leak. Oh yes, there will be comedy! In the end, it is one of those bits where the captions set you up and it all depends on the drawings. And, they are amusing. Again, not many (or any)laughs but it is charming. It's just nothing really kicks you under your shorts.

WHERE ARE THEY NOW?: The art is great. "THEN" panels with the little kid doing something and "NOW" panels showing what he became. Nothing revolutionary but at two pages with the minimal amount of reading involved it's innocuous.

THE CRACKED WORLD OF AUTOMOBILES: A series of short comic strips containing gags on cars and driving. These bits always reminded me the most of Mad Magazine. And, in fact, they have just about as many laughs as the Mad articles. Except they are missing those strangely embarrassing moments that Mad would sometimes have. You know what I mean. You read it and think, "What's the year on this magazine? 1975? Seems more like 1908." This 4-page Automobile bit has a few nice bits. The gas station gag where the car fills up with gas is done with the minimal amount of people yelling "Oh my gosh! The car's filling up with gas!" It's nice and visual. Worth the read.

A CRACKED LOOK AT A HAMBURGER FRANCHISE: Why did I enjoy this article so much? It is as cluttered and as tough to look at as all the others but that seems to work here. The jokes are no funnier but the flow of the pages seem very right. What is going on? Could I actually be enjoying these "CRACKED LOOKS" articles. I've always despised them so. We'll see what happens with next issue's bit. This article's post-civilization joke saved: "The food here is absolute poison. And such small portions."

THE FREAKS OF SAN FRANCISCO: I do prefer the TV spoofs and this one is no exception. My favorite bit here is that the parody starts with an "ACT I" caption. Two pages later, Karl Malden hold up an "ACT 4" sign. The Michael Douglas character, Stevie, says, "Hey, where's Act III?" Malden's Lt. Pebbles says, "Nothing happened in Act III, so we're skipping it!" Stevie replies, "That's a dumb excuse--nothing happened in Acts I or II, but we showed them!" Zing! These are the jokes. And, they're not bad. Funnier than JAWZ but without the sticking power. I guess that's why it's runner-up in the magazine. (And, the sign does say Act 4, not Act IV. Even though the first three Acts are in Roman Numerals.)

CRACKED GUIDE TO BASEBALL: I'm not so thrilled with two "Cracked Guides" in the same issue but I can live with it. Same routine. Captions state something and the panel shows something goofy. Some jokes work; some jokes are blah. But, in general, this has a higher "HA HA!" factor than Boating. Although, the similarity of the baseball players allow for less variety in the drawings. Possibly this should have gone first.

So far no real duds. Nothing hugely hysterical but a solid mix of articles.

THE SPECIALIZED BIONIC MAN: A series of spin-off "Six Million Dollar" characters. We get: The Six Million Dollar Sleuth, The Six Million Dollar Ideal Mate, The...Actor, The...Rock Singer, The...Politician, The...Football Player. Three pages of entertaining drawings and satirical jabs at these professions (although, Ideal mate?). I really get the feeling in this issue that, although most of the material isn't much different from previous issues, last issue's mediocre presentation has caused them to step back a little. Nothing is grab-grab-grabbing but nothing is bad. Getting their confidence back. And, you know what it is--Charming. We will stick with you, Mr. Sproul!

An ad for those Binders and Notebooks that I've never received follows.

CRACKED INTERVIEWS THE LEMONADE KING: It is Nanny, not Nancy. But, a different artist has drawn her here. Think Goldie Hawn rather than Jayne Mansfield. But, she's still got ZAZZ! This month, she tackles a 9-year-old lemonade tycoon: Danny Dollar. Frankly, this kid is a greedy prick. (Is that the right word?) He is a mini-MBA boy and if that's your cup of tea, enjoy him. The rest of us can enjoy Nanny debunking some of his shennaigans and watch him getting beaten up at the end of the article. A little off the beaten track for our favorite lady reporter but she's still got it!

The next two pages are random cartoons and ads. The ad for CRACKED Pocketbooks offers "Half-Cracked", "Cracked Up", "Your Cracked" and "Cracked in the Saddle". At great prices! There is a "Stanley" comic strip "Continuing the adventures of the Great Paleolithic Hero" It's more social commenary than big-ass laugh. "Sagebrush" is charming like a good daily comic strip. "Ye Hang Ups" has a very funny final panel. So, look for that one. Probably the biggest smile moment of the issue.

The BACK COVER ends everything nicely wth a Great Moment in Cosmetics.

A nice issue. Warming us up for the issues to come. One year from now, we will be deep in the CRACKED Renaissance. All the leading characters are not here yet. But, don't worry. If this is a taste, wait until you try all four courses. You'll be a CRACKHEAD For Life!

See bottom of Cracked #128 for acknowledgments.
Posted by Turbot's Finest at 12:26 PM