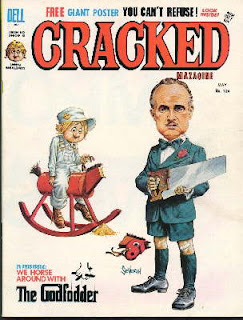 
The Godfather returns to our covers. Godfather II is out & is being enjoyed...and yet Marlon Brando is the featured person here. Even though he isn't in Part II. Oh well...He is in short pants. That's a hoot! The cover is amusing but...My God...it's stark. The Godfather, Sylvester on the horse & the horse's head. Pray tell me, please, was CRACKED a cheapie mazagine? Or are all mazagines this cheap?

POSTER: Pee yellow! IMPORTANT MESSAGE...This one's pretty good. A series of small arrows along the bottom leading to the center bottom of the poster..."You're standing too close to this poster." in very tiny letters. Nice...nice & yellow.

LETTUCE FROM OUR READERS: A guy from Lebanon likes CRACKED! A guy named Jim Franklin tells this riveting story:

"I would like to tell you how I got my first CRACKED Magazine. I went down to my local store to browse around the magazine rack and I saw CRACKED magazine. I picked it up, looked in it and it looked good. So I bought it, loved it and now I subscribe to it." Isn't that a beautiful story?

THE GODFODDER, PART XXIII: Woody Allen is the Godfodder! It's fun to see him here but they don't seem to get the Woody Allen character right. This was the year of Love & Death. The Woody here seems to be sort of a Borscht Belt amalgam. He's not witty. Just cracking bad jokes. One of his sons is now a gorilla who gets shot by a giant banana. Chico Marx is another one of his sons. On the last page, everything becomes faded during the dream sequence. (I mean in the actual ink of the magazine.) Clever, clever. This isn't a killer opener but it's got some smiles & it sure cooks.

THE CRACKED HISTORY OF TELEVISION: This is a funny bit. My favorite moment? "...the modern home receiver came about in 1939..." We see a couple looking at their three kids. The kids are staring at a blank wall. Dad: Where do you want to put the TV, Margaret? Mom: How about in front of the kids, Frank. They've been staring at that wall for 8 years waiting for something." This article is fairly faithful to the history of TV. And, there's something about the initial sensation that sent people buying TVs being Milton Berle dressed as a woman that is hilariously apt & a bit strange. Westerns & reruns & color. And huge screen TVs!!! Fun bit. CRACKED teaches me!

WHAT WILL SUPER K DO WHEN HE LEAVES THE GOVERNMENT: More Kissinger jokes! Maybe they should let MAD stick to this stuff? HK jumps into baseball, marriages, TV newscasting, selling Christmas trees to the hilarious looking Rabbi Samuelson, PR for Public Utilities and working for the Mafia. He always says the right thing! He can convince anybody of anything! My third page (18) is really faded in the ink department. Did I get a bad issue?

OLYMPICS FOR NON-ATHLETES: If you guessed the first one was for politicians and the second was for the mafia, give yourself a CRACKED No-Prize. The Grand Parents Senile Steeplechase has - Cane Vaulting - Checker Playing - Operation-Reminiscing - False Teeth Cleaning - Lace Crocheting - Family Meeting. Small Kids, Doctors & Waiters all get their time to shine, too. Kind of funny but a touch on the repetitive side, especially since it kind of resembles the previous article.

HOW PAST EVENTS MIGHT HAVE BEEN REPORTED WITH A GOVERNMENT-CONTROLLED PRESS: Unwieldy title but funny bit. "Massive Fire Wipes Out Chicago" becomes "Huge Redevelopment Hits Chicago." "Depression Unemployment at All-Time High" becomes "Leisure Time Activities Hit Record High". It's too bad they wrote other text too. Seems like a waste as the headlines do their jobs perfectly. Except for this one, where you need the text. "Democratic HQ. Burglarized" becomes "Ho Hum! Another third rate burglary." The text" "Washington - An alleged burglary was alleged to have taken place in an alleged hotel allegedly known as the Watergate." Good article.

Very political...this issue. Before they would go all Pop Culture all-the-time on us...

A CRACKED LOOK AT A BOWLING ALLEY: Did they draw these and then have the writer's come in and add random jokes? I ask this because...there is a very ugly waitress delivering food to a very snooty looking fellow. Waitress: Here's your hot fudge, banana and beer, sir. SNOOTY: Thanks! By the way, has anyone ever told you that you have beautiful brown eyes. [sic] WAITRESS: Why, no! SNOOTY: Well, then, no sense starting now. In all the chaos of this huge bowling alley drawing, where the heck did that old chestnut come from? Why put that there? Surely the food he's receiving should be the joke...but it's not. This is the weirdest sort of humor ever. I guess we're all CRACKED. I like watching people bowl and, sometimes, bowling myself. I like the layout of this one, even if the jokes aren't the freshest.

THE CRACKED WORLD OF SNOW: Love it! Love snow and love this bit! "Snow! Snow! Snow! I'm freezing. I wish summer would come back." "Sure...This way you could complain about 'Heat! Heat! Heat!'" ZING! Perfect. It's a MAD-style series of strips gags with an awesome background of falling snow at night. The jokes get no fresher here but the snow is fun. I like the ski lodge bit but what on earth does the movie theater marquee reading "Mature Kids Only: Open Sesame" mean? That's a little blue, isn't it? Is this a MAD Magazine? God, I miss the snow...

MAGAZINE COVERS FROM PLANET OF THE APES: Apeboy! Ape Sports Illustrated! Simian Cinema Thrills! Ape Love Confessions! Girl Gorilla's Home Journal! Hunting and Marauding! I would Hope that the Ape Earth has better magazines, to be honest. The illustrations are fun but the text almost dares you to read it. Seeing the pictures and the magazine names are enough joke for Pierre L.

THE NOT SO GREAT GADSBY: Well..read the book in high school. Can't remember a thing about it. Never saw the movie. To be honest, I skimmed this one. Just not interested. Sorry. What I've done is left some blank space...print this out and write your own review of it:

Ha! You make some interesting & salient points in a hilarious fashion!

THE RIDICULOUS THINGS OF LIFE: Boy, this issue is kind of sliding downhill. "Having 20/100 vision, but refusing to wear glasses because they make you look funny." "Sleeping under an electric blanket because the air conditioning is too cold." "Washing your garbage pails." Stuff like that. It's funny that an issue with a parody of Gatsby and all this political stuff would also include an article like this...CRACKED - FUNNY FOR ALL AGES! TELL YOUR MOM!

CRACKED INTERVIEWS THE NEWSPAPER KING: Hmm, this looks like no Nanny I know. (Say that five times fast.) Harry Granit is buying all the newspapers. What a douche! There are conceited reporters and crazy proofreaders and jokes about how small the newspaper would be if it was only good news. You know what? I like my Nanny bigger. This one doesn't crawl into it the way My Nanny does. I think my verve for this issue faded earlier and I'm just coasting now.

BACK COVER: Yellow! The Man & The Mousey...pretty amusing but oh-so-yellow

This issue started great and then began to lose me fairly quickly. Well, that happens. CRACKED still keeps a hard line on Strange Quality!