Cracked #144: It Takes So Little To Make Me Happy 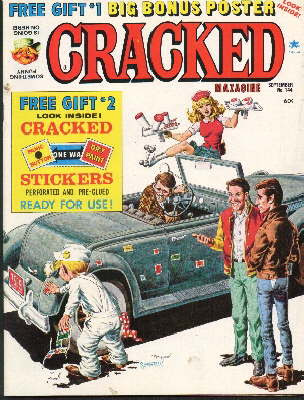 Tremendously stupendous. A bit surprising that the first Happy Days parody is only happening now but...Thank God. It won't be as much Fonz as we're used to but, Good Jesus Help Me, it's going to be nice. What a cover! Let's dive in!

The poster reads "Warning! Forget that you saw this poster This Means You!" Has their regular poster guy retired?

TABLE OF CONTENTS: The Fonz and Mr. C are featured in the little panels on the right. This is going to be good.

LETTUCE FROM OUR READERS: Only one page this issue. Next issue - July 12th.

The second page is taken up with a subscription ad pointing out that their accountant is a tightwad and that you can save $1.40 because he's on vacation. Not bad.

HAPPY DAZE: I knew it would be called Happy Daze! You just get that feeling. The plotlines? 1) Mr. C discovers that his hardware store had a huge drop in sales so they have to economize. "Maryanne" (Mrs. C) throws out the expensive dinners she keeps making and boils water. 2) Itchie is going to follow Mary Berth Wartwhistle to Hamburger University instead of Northwestern. Everyone thinks this is a bad idea eventually the Fonz is called in to help Itchie straighten up.

So very good. It's a mix of jokes that relate to the show (like Boney (Joanie) pointing out that her Dad tells her to "Go to bed" a lot - "Yesterday I slept 23 hours") to jokes that are pure CRACKED and don't relate to anything but the writer's minds (like Potsy showing up in a track suit for band rehearsal because they're going to "run through a few numbers"). I don't even know if the second type of humor could be considered actual comedy but it's all great. Everyone gets a moment to shine. There are some laughs. And, the Fonz says to Itchie, "Just remember, women are not everything? A man's career is important, too--how'd I get myself to say that?" Great opening. I feel like we're back on track again.

SUPER SKATEBOARD STUNTS: This was written right after the new skateboards appeared with the polyurethane wheels that allowed for all sorts of stunting around. It's OK. A lot of nice visuals showing skateboarders doing crazy stuff and, quite often, getting hurt. It's a solid 4-pager. "My Mummy Done Ptolemy" is written on the bandages of one really beaten-up skater. That is a reference to one of the absolute classic blues standards "Blues In The Night". When Daffy Duck sang it in a 1940's cartoon, it was topical. Were a lot of the kids of 1977 crazy about 1941's biggest hits? Did this make them set down their copies of Boston's debut and pick up the Ella Fitzgerald Sings the Howard Arlen Songbook vinyl? I wonder.

AD CAMPAIGNS FOR UNWANTED PRODUCTS: Pretty darn good. Ads for wrong numbers, junk mail, lumpy oatmeal and income tax forms. The wrong number ad shows a beautiful woman who meets a great man through a wrong number. "Say, how would you like to meet me for dinner tonight." [sic] "Me?...A girl whose last date was 5 years ago with a 90 year old Mongolian monk from Madagascar. Wow!!" We see a very lonely woman become completely thrilled when junk mail arrives. And, my favorite, they want you to visit the "Frost-Heave Inn". It is shown as a beautiful inn that is actually just a fake front up against a horribly run-down building.

AT AN AFTERNOON BUSINESS LUNCHEON: A one pager. I've done the joke in this one better in real life. Skip ahead.

IF COMMERCIALS WERE BUILT INTO TV PROGRAMS: They seem to be right back on track. Kojerk, The Bionic Lady, McClod, Walter Klondike and the Evening News and the ABD Movie of the Week all get loaded up with ads (product placement expanded). The ABD Movie is my favorite. It stars a Woody Allen character in a situation very similar to the Mad Scientist section of Everything You Always Wanted To Know About Sex..." Ads keep appearing and it's great. I'd detail the ads and the jokes but this one's more fun to read than read about.

A CRACKED LOOK AT THE PHONE COMPANY: One of the lighter "CRACKED LOOKS". The jokes aren't funny but it breezes by and it is interrupted by...

"FREE GIFT #2" CRCAKED STICKERS! There are around 18 of them and they are all sort of like mini-posters. "Fight Ilitarasy!" A one-way sign pointing two ways. "Out of Ordre" That kind of thing.

They are cooking here. No wonder the poster in this one was blah. They saved all the great stuff for the stickers.

EXPOSING THE CON IN CONTESTS: You know, I think I see why this issue is hitting it so solidly. They never wander outside of the sort of thing they do well. Although this isn't their best issue, each article hits the strengths and leaves you smiling. This one shows big contest ads and then has a small magnifying glass in a corner revealing the fine print. The one that grabbed me right off was a picture of a brand new camper with an old hippy standing in front of it. "Win This Camper!" "The camper you win is Albert Snodgrass." The old, smelly hippy. Yes, The Fonz does appear in this under a "Win A Trip To Hollywood" thing. This one just cooks. Some jokes are better than others but it all just feels right.

DIGITAL INSTRUMENTS OF THE FUTURE: I'll just run through them real quick...

Digital Shopping Cart - Shows how much you'll be spending. (There is a woman shopping to the right of the woman with the cart. A child is yanking at the woman's pants to get her attention. And, the child has actually started pulling the woman's pants off. You can see part of her behind. Why?)
Digital Spending Meter - Measures how many tax dollars wasted by Congress.
Digital Unemployment Calculator - "registers the number of a school's unemployed graduates"
Digital Violence Recorder - For the top of the TV
Digital Pest Recorder - Shows how many insurance salesmen have come to your front door.
Digital Phone Meter - Shows how high your phone bill is.
Digital Calorie Calculator - Shows how much you're taking out of your fridge.
Digital Speedometer - Shows how high or low over the speed limit your car is going.
You know, there are more but the one you need to remember is the Digital Dumb Joke Totalizer. This one is for your CRACKED magazine.

THE CRACKED HISTORY OF ECOLOGY - Four pages of jokes about pollution, garbage and stuff like that. Nicely done. Although, CRACKED doesn't really seem to be convinced that any of this is a problem. They do the MAD thing where if hippies are involved, it must be pointless. Bravo, CRACKED! You've always stood your ground. Not a great article but you may learn a thing or two. (Or you might not.)

BAAD BAAD BLACK SHEEP: A perfect example of why the TV parodies are better than the movie parodies. If this had been for a movie that I'd never seen, I'd be snoozing because the jokes would be very scene specific. But, it's a parody of a TV show I've never seen and I love it. Who are these characters? What are they doing? Who knows? But, I'm smiling. The second page and half of the third are made up of a big aerial dogfight with jokes coming out of various planes. Nice. One woman mentions breaking her Vinnnie Barabarino thermos. Awesome.

CRACKED INTERVIEWS THE PET STORE KING: Our Nanny skewers some jerk who is selling people all kinds of strange pets and pet-related things. Way to go, Nanny! This Pet Store King reminds me a lot of the Fad King from a few issues back. Regardless, skewered he be! Wonderful.

Do you need the ratings here? Do you imagine they are anything less than stellar? In fact, the second one is an all-tine favorite of mine. So good.

"Gorge Hairystone Invents Rock Concerts" on the back cover. He is a caveman who hits other cavemen with a rock. Ahhh... I feel refreshed.

When they are on, they are on! CRACKED, you hit it here! As I said, they stick to their strengths and they can't be beat. Too bad we had to go through a bit of a trough but things are nice again. What will the next issue hold? Hmmm...

Next Issue: Holding Awesome!
Posted by Turbot's Finest at 8:55 AM