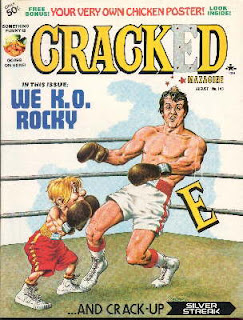 Yes, there is no Kong on the cover. Yes, that's wonderful. Yes, there is no Fonz on the cover. Yes, the tears are rolling down my face, too. But, it is very nice to see someone not gorilla-esque on the cover. The promise of "Rocky" and "Silver Streak" parodies in the same issue isn't as thrilling as I'd wish it to be but...look on top! The cover declares, quite boldly I might add, "Your Very Own Chicken Poster!" So, although two movie spoofs in one issue might make me wary, all I can think is "Holy crap, a chicken poster of my own!"

Hey! There is a chicken poster. "Down With The Colonel!" Nice. I've got two issues of the magazine because I had to detach this hilarious poster. It now hangs over my four-poster. Ahhh... Can the magazine be as great, I wonder?

TABLE OF CONTENTS:Proofreader is still Jhon Smiht. The comedy simmers slowly. It's like pre-heating an oven.

LETTUCE FROM OUR READERS: You know, this month's letters column hasn't grabbed me. Normally, I have to restrain my sides. This time, it seems almost like a regular letters page with occasional comedy drawings. Hopefully, this is not how I feel about the whole thing. Next issue - June 7th.

ROCKEY: Rockey's a real bruiser! Adrian's so ugly that she wears a paper bag over her head! There's boxing and lockers and jokes about turtle food! My God, I was never much of a Rocky fan but now I'm buying all the movies and watching them three times each. The things CRACKED makes you do. Best joke: Rockey is taking Aperian on a date. He asks Brawly what his sister might want to do: "Hey, Brawly! What's your sister like to do?" "Take her some place where she'll feel right at home." "Like where?" "...the dog show." Oh, my sides. thanks, Cracked. What else have you got?

IF TV COMMERCIALS WERE HONEST: Loved it! Dorothy Hamill for Clearall. McDonald's. Long Distance calling. Rosie and Bounty. Shake 'n' Bake. Pepsi. Laundry detergent. They all get it here...and it's funny. They throw a series of zings at the adverts for these articles of merchandise and they leave everyone squirming on the ground. Razor sharp satire from America's favorite Cracked!

SPECIALTY SIGNS FOR SPECIALTY STORES: Great drawings of storefronts with very specific signage. The balding Lamb Sweater Shop has a sign that says "We want to pull the wool over your eyes." Yes, the jokes are like that. Nice and obvious so you don't get distracted from the Richard Scarry-esque drawings. I want to live in this town!

SMALL IS BEAUTIFUL: Everything's tiny. Tiny cars (can be cleaned in the dishwasher) to tiny wives (easy to brow-beat) are all covered. Tiny cigarettes, too. The things that inflation and shortages made us do. Look at that guy's wife! She's tiny!

POEMS TO CRY BY: Purchased from some sort of MAD Magazine garage sale, no doubt. Rejection letters and the like from schools, publishers and such all told in rhyme. I'll be honest: I don't read Mad because of this sort of article. Not enough pictures! A couple of funny poems but I can't recommend it.

NEW FORMS OF HOME ENTERTAINMENT - Thank Heavens, pictures! Boy, Pong really has made everyone go crazy. This article is pretty good. Stuff to do at home! Things like putting colored lights on your turntable and watching them spin. Putting asbestos ducks in your toaster and shooting at them. At two pages, this one is a breeze.

Hey, there have been a lot of short articles in this one! Clearing house, Cracked?

A CRACKED LOOK AT A CIRCUS - Contrary to my popular opinion, I like this one. There is a lot more space in it and fewer jokes. The jokes seem more disconnected from the setting than ever but, you know what, I love a circus. I also love a parade but I haven't hit that yet.

CRACKED SPECIALIZED GREETING CARDS - What's with all the cards and letters and rhyming in this one? Would the Fonz have kept this under control? This article, at least, has pictures. "I love your doggie and his cute heart-shaped marking/ but I'm calling the cops if he doesn't stop barking!" with accompanying drawings. A sweet little piece of candy that leaves no aftertaste.

HELP WANTED - There are ads for an "environmental pollution director" but it's a garbageman! Ha HA! Well, kind of obvious. They're really turning the satire screws hard on this one, though. Most of these jobs sound great - but they stink! Next!

CRACKED LOOKS AT THE T-SHIRT CRAZE - Brief comic strips with jokes about T-shirts that have stuff written on them. Boy, this issue alternates the satire with the breezy stuff pretty easily. My favorite? Oh, thanks for asking. A mom is watching her daughter go out with a young gentleman. Mom has a rolling pin in her hand. The kids are smiling. Mom's T-shirt says "Overseer". The daughter's says "Slave". The boy's says "Master". Classy! Oh, one guy's shirt says "I Love My Splotz!"

SILVER STREAKED - Two movie parodies in one issue. Maybe this is a Mad magazine. Nope, it's CRACKED. This one's OK. I'm kind of "movie parodied" out. A couple of decent jokes but were the kids really into jokes about trains being late? Well, they could have been, I guess. Wasn't the movie mostly a comedy? Hey! Rocky's in the first panel! Way to go, Rock! Let me look for the Fonz.

THE CRACKED BOOKSTORE - Hey, someone cut out the coupon in mine!

CRACKED INTERVIEWS THE MONSTER KING - Ahhh, here's King Kong. (He appeared briefly in Rockey, too.) I was hoping he might have fallen from favor. Nope. Just getting sifted around in the magazine. Nanny visits the King in his giant Hollywood home. (I do mean 'giant'.) In the end, Nanny's charm causes King Kong to carry her away. She'll be back. I hope. Not really a hard-hitting interview but it was fun. King Kong has a big house! I must be in a good mood today if I let this constant "Kong Worship" just breeze by here. Oh well...

Average - 8 The final shut-up was too damp and I'm lonely.

A charming mix of longer, harder pieces and shorter, flabbier bits. This issue and the last one have been like rays of light after the foul-smelling sludge of #141. I want to say that, at this point, King Kong is done and we can move on.

What kind of days (or daze) can we expect in the next issue?
a) Crappy
b) Sappy
c) Happy

Think carefully before answering.
Posted by Turbot's Finest at 10:02 AM