Cracked #137: Sweathogs Celebrate Summer with Fun and Sweat and Hogs 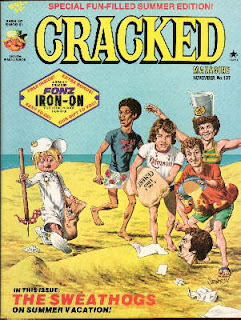 The cover is definitely summer what with the Sweathogs and, I assume, water behind them. The coolest thing about this cover is that yellow burst right above Sylvester.
"Fonz Iron-On"! Oh yes. Let's go in.

No poster. The front inside cover is The CRACKED BOOKSTORE ad. The back...well, let me just preview it by saying that they have finally done what I thought they should have been doing for a while. (Saving a certain fellow for the end.)

TABLE OF CONTENTS: Standard with an extra touch of Vim that is propelling me to the first article.
Proof Reader: Now Accepting Applications (That can't be good.)

LETTUCE FROM OUR READERS: The proof reader is being held for ransom. Maybe you should write to the magazine and send some money. I don't know if they want that yet but I'll keep you posted when the next review comes up. Regardless, stand by with possible cash. The proof reader must be returned unharmed! So it is written.

HOW THE KOTTER GANG SPENT THEIR SUMMER VACATION: 6 pages detailing what the Sweathogs and Mr. Kotter got up to during summer. The article leaps back and forth between Kotter's relief at not having to see the Sweathogs to Babarino being a lifeguard to Epstein trying to get a job but constantly stealing things to Washington and Horshack trying to become camp counselors or whatever. If all this is true, than this is a wonderful example of documentary presentation from the folks at CRACKED. If it's all faked, well, I still giggled. I like this sort of random jumping around better than a straightforward parody. It's a great way to start the magazine and it seems to fit the summer theme.

ANOTHER COMBINED MOVIE - "GODZILLA" VS "THE TOWERING INFERNO": They know what I like: combining! Well done. One page of smiles.

AS THE GENERAL, YOUNG, AND RESTLESS HOSPITAL TURNS: A soap opera parody with society ladies, robberies, hospitals, crazy newspaper editors and all kinds of junk. I guess this article is here because kids tended to come across soap operas more often in the summer if Ma was watching them. Or if they were bored and just tuned in. Hey, these things are kind of racy! But, fun. Not "butt" fun but "but" fun as in "still fun regardless of whatever". It's an entertaining article. Another fast-moving one that jumps between several stories but I'm having a tough time picking a favorite moment. Oh well, I cannot win them all.

CRACKED METHODS FOR REPAIRING YOUR CAR INEXPENSIVELY: All sorts of goofball bits of chicanery to keep your old car running. Tips such as replacing a defective horn: "1) Driver sees car cutting into lane and decides horn action is needed. 2) With newly repaired horn, driver merely rolls down window... 3)...and shouts a slight warning. 'Get out of my lane you blind, bum of a driver'" Stuff like that. Filling tubes with ice cubes and covering your car in them so they cool you off. Clever stuff. I may try putting a horse under my hood later today.

IF THE AMERICAN REVOLUTION HAPPENED TODAY: Hey! Those Americans! It's nothing but pollution, laziness, taxes and other junk! You guys would never have won the American Revolution today! "Don't fire until you see the whites of their eyes!" How do you see it through smog and smoke? How is the Declaration of Independence going to get signed when football is on? HA! CRACKED unzips it and shows you the zinger. All you can do is cry.

A CRACKED LOOK AT A WRESTLING MATCH: I like it. Big art, minimal jokes. One of the best "LOOK AT..." articles I've seen. So far, at the halfway mark, I'm still fresh.

BEACH BLANKET PARTY: I just got fresher! It's a parody of a beach party film with songs and fresh faced teens surfing and dancing and...King Surfer! Who's that guy in the white shorts and leather jacket? The Fonz! I knew he'd show up! Bravo! I should construct a binder consisting of nothing but Fonz articles from CRACKED. That would be great. Nothing is funnier than the Fonz's face when he yells "TIDAL WAVE!" This is the best. We are still knee deep in the cream of CRACKED's crop here. Buy this issue. Read this article. Now.

HOW TO MAKE BASEBALL MORE INTERESTING: Not bad. Their normal sports articles I shrug at but they've got a lot of goodwill going right now. Quicksand under second base. The outfielders on horseback. Three or four teams playing simultaneously. It's all great. At four pages, this is a breeze. Damn, they've got it down here. The summer theme continues and I'm smiling like an automated Smiling Machine.

W.C. FIELD LAFF-IN: Well, it can't all be great. W.C. Fields is funny. It's A Gift is a favorite of mine. This is one page of stills from his films with unfunny dialog added. I guess it's a breather before...

IF THE FONZ GUESS STARRED ON OTHER SHOWS: Oh yes! "Hawaii 5-0" "Sesame Street" "Meet the Press" "Police Woman" "The Waltons" "Star Trek" One joke from each? Sure. "Hawaii 5-0" --"And don't come back or I'll stuff you in a sardine can!" The Fonz yells as he stamps sharks on the head. "Sesame Street" -- Big Bird wants the Fonz to count past 6. The Fonz calls Big Bird a "furry, little nerd" and Big Bird makes him count up to 1 instead. "Meet The Press" -- I'm not sure I spotted a joke here. The Fonz rides across the Atlantic Ocean on his bike. Is that one? "Police Woman" --The Fonz in black face singing "Mammy!" Does it get better? "The Waltons" -- "You have to pull his udder." "His udder what?" They're talking about milking the cow. "He?" I don't think that's his udder they want you to pull Fonz! "Star Trek" -- The Fonz is able to look exactly like Leonard Nimoy without much alteration. Spock - Fonz? The same man?

CRACKED'S FAVORITE TV SCENES FROM LAST YEAR: Big stills from "Good Times" and "Happy Days" and "Kojak" and so forth. They add little word balloons with "funny" dialog. Three pages. It takes ten seconds to read. A little transition towards...

CRACKED INTERVIEWS THE ART KING: Tiny Nanny is back! Who is this woman? Hey, this art king is a ripoff artist! Hey, most of the people she interviews are ripoff artists! What the hell? Nanny, when do you get to review someone who's not a complete con man? Soon, I hope. Fight the good fight. Bring back "big" Nanny.

Total : Oneteen. A new number for a new era!

Why only two? because the bottom third of the page has Fonz Iron-On Instructions!

The inside back cover is a big drawing of the Fonz's face and the caption "I'm the Fonz on his day off!" Oh man, I need to buy a white T-shirt now. Iron-ons are my new "thing"! Love it!

Back Cover - Great Moment in History. "The First Babysitter" Cavemen, an elephant and babysitters. You do the Comedy Math.

This may be the best issue yet. The W.C. Fields page is blah. Nanny is wrong. But, the rest is so great. The Fonz features in two articles and an iron-on. Can this sheer joy continue? What does the next issue hold? Hang on to my new T-shirt and we'll find out!

Ayyyyy! It's his day off today so that makes me...You got it!

I just discovered your website and I really appreciate it. Looking at the covers and content from these issues is a real walk down memory lane.

I am pretty sure #137 is when I discovered Cracked. I know for sure it was a sweathogs cover. I ran from the store and begged my mom for enough change to buy it. I have been fascinated with caricatures ever since.