He Sits on A Smelly Throne 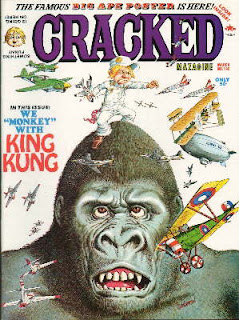 The Fonz has been replaced, officially. (Although, the contents of the magazine might lead you to believe otherwise.) King Kong is now our poster boy for CRACKED. Two covers in a row, if you need further proof. Welcome, Kong. Are you as cool as the Fonz?

Well, that cover is pretty great. The poster inside (the "Famous Big Ape Poster") is an expansion of the cover. It's pretty great, too. Not as cool as the Fonz just saying "Ayyyyyy!" but still nice. So far, so good.

LETTUCE TO OUR READERS: Amos Svoboda, anyone? Yes, Kong is here. You gotta milk it on every page or it just won't go. Next issue on sale - January 25th

KING KUNG: I really think they should have just stuck with Kong-related articles rather than parodying the movie. The focus goes right off of Kong and onto the humans, which isn't helping anyone. (If you've noticed, so far - tons of articles on The Fonz including a Collector's Edition with almost all new material. And yet, no Happy Days parody. The Fonz would be sidelined by the other characters.) This is a decent film parody. As always, I prefer the TV stuff. I haven't seen this version of Kong in 20 years so the more specific the gag, the less it works on me. Overall, this isn't a bad opener but it's nothing world-beating.

I remember King Kong being almost universally gunked on when it came out. A remake of a classic! But, it's really no different from any of the hundreds of remakes they make today. Back then, we weren't as prepared for it. Now, it happens and we shrug. Then, it seemed like blasphemy. But, really, it's just a remake. It has its moments. It has some dud scenes. It has bits that are horribly dated. We can move on.

THE CRACKED GUIDE TO HANG GLIDING: A rather sassy narrator leads us around the activity known as hang gliding. Some good jokes and funny illustrations pepper this one. I kind of wish the article after the movie parody had been a better one (there is one coming up) but it's decent enough. "Why is this called a crash helmet?" "You'll find out when you land." So far, we're in pretty average territory. The Fonz had already knocked #134 out of the park by this point.

THE MIRAGE: Clever one-pager. A good gag. Two guys in the desert imagine a couple eating and drinking under a big umbrella at a table.

RANDOLPH THE REINDEER: A little Christmas special from CRACKED. Good poem and excellent illustrations. What if Rudolph were named Randolph, smoked cigars and was surly? Nice. This will be a "Special Xmas addendum" in December. Watch out for it!

ONE DAY IN LOS ANGELES: Another one pager? Well, this isn't as good as The Mirage but there's a smile in here.

THE CRACKED GUIDE TO FOOTBALL: Another CRACKED guide? Huh? Are we running in circles in this issue? This one is "the other" kind of guide. Whereas Hang Gliding has a self-aware narrator that lies, goofs around and sets up jokes, the narrator here is very dry. He says "The game begins with a traditional kick-off." We see the coach kicking a player off the bench. Those kinds of jokes. A very straight caption describes something real followed by a goofy picture. It's neat to see the two styles so close together in an issue that we can examine them. Hang Gliding is still very fresh in our minds at this point. Look at these two Guides as more of a learning exercise than really great comedy.

A CRACKED LOOK AT A NEWSPAPER: Well, the jokes are awful but the layout, while being very cluttered, is more interesting than the unemployment office in the last issue.

At the halfway point, I've got to say that they've abandoned a lot of the MAD-style stuff from last issue but, overall, it's been a tremendously average issue. The repetition is worrying me a little.

IF KONG MADE GUEST APPEARANCES ON TV: Excellent! Here we go...saving the cream of the crop for the second half. King Kong on Happy Daze (yes, he rides a motorcycle, gets a Fonz haircut and wears cool boots), The Sunny and Clear Show, The Walled-Ins, The Six Billion Dollar Man, Laverne & Shirly and Boretta. It's just great. Big smile on my face as I read, this was much better than the movie parody. But, this article is just the warm up...

IF THE FONZ BECOME BIONIC: Holy crap! it's as great as you think it is. The Fonz is in an accident and he and his bike are made bionic, So good. Like a big sundae covered in marshmallow and peanut butter sauce. So good.

BIONZIE AND HIS BIONIC BIKE!

I don't know. Maybe they had this article hidden away. The Bionic stuff seemed to peak back around #135 but, regardless, it is 104% wonderful. They do point out at the end that "Bionic or not, the Fonz would always be The Fonz. He's the coolest!!!"

CRACKED BOOKSTORE: They offer things. But, don't cut out the coupon or you'll damage The Fonz article.

THE BLUE NIGHT: A parody of the George Kennedy TV series "The Blue Knight" It only ran for one season so you can be forgiven for wondering what it is. But, as per my previous thoughts on their parodies, a TV parody of a show I don't know is still generally more interesting than a movie parody. This is fun. Bumpy Morgun and his partner are completely oblivious to all the crime around them until the very end. They chase some crooks around the borders of the last page of the parody. I know nothing of the show but this is funny enough. It's no Bionic Fonz but it keeps the issue moving respectably.

SOME WORLD RECORDS YOU WON'T FIND IN THE GUINNESS BOOK OF RECORDS: Exactly what you'd imagine. A text-heavy article with some good fake world records. "World's Heaviest Beauty Queen - At 354 lbs., Hortense McHefty was the heaviest Miss America to ever win the title...she sat on the judge until he awarded her the trophy." Stuff like that. A little bit of a drop off in quality but, at two pages, there's nothing to really complain about.

CRACKED INTERVIEWS THE TRAVELING CARNIVAL KING: Our Nanny is back and she's at a rather shady carnival. "A rather shady carnival?" Does that actually mean anything? I love carnivals. I love Nanny. This is one of my favorite interviews from her. Nice way to close out the main body of the magazine.

GREAT MOMENTS IN GARDENING: "King Louis XIV introduces the first lawnmower." You can bet your ass that some poor people get hurt.

Not as slam-bang, "kick 'em in the head" as I was hoping. The first half of the issue is semi-forgettable. Some good moments but it is over-shadowed by the beauty of most of the second half. The Bionic Fonz is enough to make this an issue worth reading. Maybe an "All-Fonz Special" supplemented with "Fonz for President" is in order.

Read and enjoy and don't be a "Nerd".

Next issue: And, the Kong obsession continues...
Posted by Turbot's Finest at 8:52 AM