Kong's Back A Third Time 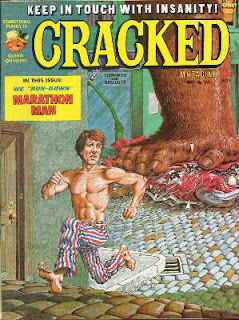 You can feature Dustin Hoffman and Marathon Man as much as you want but when King Kong's huge foot is crushing a car in the background -- we know who the real star of this cover is. With his third cover appearance in a row, I give you -- Mr. Kong. One more and he'll tie The Fonz. Two more and he's got the record. Oh dear.

Inside with me, please.

The poster for this one demands "End Alphabetical Discrimination Now!" "People whose last name begins with the letter 'X' demand to be put in the FRONT of the phone book today!" Wit, thy name is CRACKED.

TABLE OF CONTENTS: You know what? Not much to report here. They list all the things that are going to be in the magazine and say what page you can find stuff on. It's really quite handy.

LETTUCE FROM OUR READERS: What I learned? CRACKED always comes out on a Tuesday. Next issue - March 8

MARATHON JAM: I've never seen Marathon Man. I put it on my Netflix list to watch it for this review but they sent me Azumanga Daioh - Disc 2 instead. That was awesome! This is a pretty straightforward movie parody. Speeding through what is, apparently, a very complicated plot, it hits what, I imagine, are the high points and moments. The best gag is the running gag of Dustin Hoffman's character constantly running no matter what he's doing. I have such a tough time getting excited over their movie parodies, even when I've seen the movies.

Let's call it this: A decent opening that promises great things ahead.

KING KONG'S BOYHOOD: Pretty good timeline of Kong's life from when he's born until he became a Hollywood star. Although, this one seems to rely a little too heavily on the fact that Kong is really big. (No! Really big!) One of the panels says "By the age of 5, Kong was already taller than his father..." We see a small gorilla standing on a tree stump glowering at a big gorilla eating a lollipop. I don't see the joke here. For every good gag, there is one like this. The Fonz was cool and that was cool. King Kong is big and that was funny...eleven times. Now, I'm getting a little tired of Kong.

VIDEO GAMES WE'LL SOON BE SEEING: I had no idea that people were playing Pong in early-1977. I thought it was closer to 1980. Goodness gracious. Every game here looks like Pong. There is "Passing The Buck" Two small rectangles on each side sending a small dollar sign back and forth. "Bureaucrats and politicians take to this game like a duck takes to water." "The Boston Bounce" features the rectangles sending a bus back and forth. "Stubborn defenders try to keep integrated bus from landing at their school. The real losers in this game are the kids at both schools." Did they steal this article from MAD? It's nice to know that CRACKED hit the video game bandwagon as soon as possible. Things only get nuttier circa-1982.

My favorite: "Lusho - The Perfect Contest for Dean Martin Types" This one involves booze.

CRACKED'S NEW LEARN-AT-HOME SCHOOLS: MAD? Ads for the "Plastic Surgeon's Institute" and "The Cracked Humor institute" and "Become an Astronaut" pepper this one. Some stuff is pretty funny but it doesn't quite grab me. It's a bit too obvious, even for CRACKED. I do like the Humor Institute bit, though. The "pick the correct punch line" for a "Waiter, what's this fly doing in my soup?" gag is nice.

LIFE'S BIG LOSERS: Speaking of MAD, Alfred E. is featured at the top of this along with the Edsel and the American taxpayer and stuff. Super Zing! A series of three panel bits describing a loser trying to fix his or her life and getting in deeper. For example: "As a surfer, Sandy Shores was always bumping into dangerous poles..." We see a surfer running into a dock pole. "so he took up skateboarding" We see Sandy skateboarding. "...and he's still bumping into dangerous Poles!" We see Sandy being hoisted off the ground by a fellow saying "Nobody runs into Mike Kowalski, punk!" This one's OK. You know when one of these issues starts off a little weak it can take a while before it really picks up again.

This next bit ain't helping.

A CRACKED LOOK AT PLAINS, GEORGIA: Home of new President Jimmy Carter. Cluttered with lame gags about peanuts, this one has a nice background but I got about halfway through hopping from joke to joke and found myself bored. I'm really wishing on a superb second half here.

REDEMPTION COUPONS WE'D REALLY LIKE TO SEE: Am I sure I'm not reading MAD? A series of coupons to get consumers out of really annoying things. "One Night free of noise from Trash Collectors" "10 minutes of Smogless Sky" "Coupon entitles bearer to add three years to his age in order to see 'R' and X-rated movies." It's OK. I'm not bowled over by it but it's not without its charm.

THE SEARCH FOR BIGFOOT: The joke is lame but I love Bigfoot. Maybe we'll see more of him in the future? A one-pager.

THE CRACKED GUIDE TO BOWLING: 5 pages and it's charming. Some funny illustrations perk up this one. I'm really looking for anything here and this one is a nice moment of "Ahhh! Now, it might pick up!" I'm hoping. I haven't felt this blah about an issue in a while.

SOME GARAGE SALES WE'D LIKE TO SEE: King Kong, NYC, Ronald Reagan and Ex-President Ford's garage sales. Selling off their belongings. Reagan's stuff is all Presidential victory stuff that he won't use. King Kong's stuff is all really big stuff. "Use his toothpicks for pole vaulting!" Ford's stuff is all about how clumsy he was. NYC has a lot of stuff like "beach sludge". At 2 pages, I hardly remember that this article is there. Again, it's just OK.

CHURLIE'S ANGELS: I think that title sums up the level of humor in this issue. A lot of humor, a touch of shenanigans. This is better that Marathon Jam but kind of a shrug. It does have a man named "Milton T. Spitheimer" in it so that's something.

THE CRACKED BOOKSTORE: Sure it is.

CRACKED INTERVIEWS THE POWER COMPANY KING: Nanny and her nephew Dickie talk with a shady power company guy who is bilking many of his customers! Where are the nice people interviews? This guy is shifty. He overcharges people and is mean and patronizing. Luckily, Nanny and Dickie hand him his pants on a pole, if you know what I mean.

Too little, too late.

THE LONELY CONVICT AND THE PET: A one-pager on the back cover. Not really much of a joke here. Perfect for this issue.

Sigh! It's a fine line here and this one is firmly on the side of "bland" and "not funny". God, I wanted to love this issue. (I want to love every issue!) But, it starts off poor and never lifts up its head. Everyone's trying hard but no one's doing it right. Maybe it's King Kong's influence. The Fonz kept us grooving. Kong seems to have failed as the new poster boy for CRACKED. We need a replacement, pronto.

Next Issue: Will Kong return? Will I laugh?
Posted by Turbot's Finest at 8:54 AM