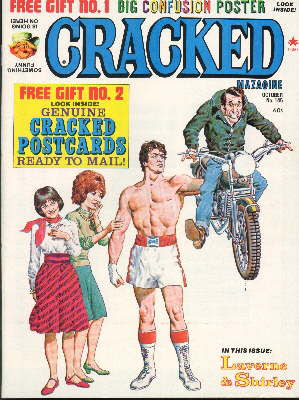 I love the cover and I don't love the cover. The Fonz hasn't been this degraded since we saw his little legs hanging off the conveyor belt on #136. But, if anyone's going to pick the Fonz up like that, it should probably be Rocky. (Kong would be to easy.)

Yes, in the end, I love this cover. Let's check out the magazine, huh?

"Craymon" This is a word in the "Big Confusion" poster. The poster has a lot of strange, goofballery words in it. Here's the full text (black letters on yellow background):

It has come to our attention that certain percamunius individuals are continuing to cause unnecessary craymon. This can prove to be dericulus and extremely damaging.

Any recarnaders who continue these practices will face automatic boduption. Absolutely no derainments will be made! If you have any further questions, address them to your immediate carastapor!

THIS IS YOUR LAST WARNING!"

(Oh, my "CRACKED POSTCARDS" as advertised in the cover have gone missing.)

TABLE OF CONTENTS: ERRIN SPELIN' - preuf reider for this issue. Looks like this is going to be a fun one.

LETTUCE FROM OUR READERS: Only one page again. (See last issue.) Next issue: August 16th. Too brief. I like to luxuriate in the letters and this is too brusque.

LEVERNE & SHURLEY: I always like when the TV shows reappear. We get more or less the same jokes but with a different plot line. Rockey Baboona teaches the gals self-defense when Linty & Squiggly are robbed. A bunch of sitcom characters appearances, such as Ed Norton and Ralph Kramden and Lucy and Ethel. This one is fun. There are a couple of decent laughs. (Shurley gets a great face in one panel.) And, there's a Farrah Fawcett gag at the end. How could you ask for more from an opening parody? I could wallow in this forever.

THE CRACKED GUIDE TO BABYSITTING: Fun but odd. Two examples of odd: they show a bunch of kids and list the going rate for babysitting above them. The price goes up as the kids get older. A set of mean looking twins has "Name Your Price" beneath them. Then, the last two are a swanky looking guy and a young gal in a little skirt. "You pay 75 cents an hour." Funny in a slightly disturbed way. Second example: How to keep the kid occupied. Well, you can play games with them or... "give him something he can keep busy with." In that panel, we see a little Fonz-esque kid with his hands in his pockets getting introduced to a little girl with pigtails. CRACKED! Where are your manners? Besides that, this is a fine little guide. Hell, maybe it's all good advice. I don't know. I never babysat. It sure seems like it might work. I'll give it a try.

A CRACKED LOOK AT SUMMER CAMPS: A series of comic strip gags. A lot of jokes about kids going horseback riding and smelling bad and how expensive summer camp is and things like that. My favorite? Thanks for asking. Two kids are seen chatting. 1ST KID: How do you like camp so far? 2ND KID: It's O.K., I guess. But I can't help thinking that the owner is just in it for the money. 1ST KID: Yeah. I know what you mean. The two kids turn and look into the next cabin window. They see kids crammed against the windows into tiny bunks like chickens in cages. I laughed and then I went "gosh". So far--we are boiling along!

COTTONIN' TO CARTER!: Wow! They really liked doing Jimmy Carter stuff. This is all about what Carter has done to the country. There's a big fishin' hole in front of the White House now. The New Lincoln Memorial is now Mr. Peanut. Hank Williams is on the one dollar bill. There is no more Department of Defense. It is now the Department of Feudin'. A lot of hayseed jokes and such. I wonder if any of the CRACKED Editors was ever hung for treason.

THE AWAKENING...: Good one pager. We see an egg being poked open by a chick. The chick emerges and has a look around the filthy, smelly city streets. The last panel is the chick crawling back in the egg. Not bad.

A CRACKED LOOK AT A SKATEBOARD PARK: We're halfway in already! Wow! This issue is, frankly, rad. I don't mind this one because it isn't overcrowded with jokes and there is movement in the drawing. It's when everyone's standing around like a million Henny Youngmans that I get antsy. This one is not bad. Of course, the jokes aren't funny but you take what you can get.

THE CRACKED GUIDE TO SOCCER: Not a great one but not a bad one either. A lot of very dry captions with really goofy pictures. Things like "This is the goalkeeper" and we see a fellow with a feather duster and an apron cleaning up the goal. You know what I mean. There are a few smiles in here.

AN AFTERNOON AT AN ARTIST'S STUDIO: One pager that ain't half bad. The joke is kind of obvious but it's a fun scan.

IF ROCKEY APPEARED IN OTHER TV AND MOVIE SPOTS: You knew it had to happen. Let's see where they send Rockey.

The Merry Tailor More Show - Rockey and Paulie show up. Paulie does some dumb stuff and it's over. Well, that was brief.

Wilderness Kingdom - Murle Purkins goes after the "Italian Stallion". He spends a page watching Rockey get ready for his day. It's not bad. Rockey eats eggs and likes animals and is well-built. Nice. They've got it.

Jawz - Do you think Rockey beats up the shark? Well, you could be right.

Welcome Back, Kodder - He's teaching now! Yep! And, he's not very smart. He got in there by beating up the principal.

Apparently, there's not a lot to do with this character. The same jokes are repeated several times. Maybe a better choice of shows would have worked. This article, which I had very high hopes for, is just OK.

AIRPLOT '77: If you've seen the film, you'll enjoy this. I've seen the film therefore I enjoyed it. Jokes all around the "plane goes underwater" entry in the Airport films. I like the film and I enjoyed the rib tickling quality of this article. And, it isn't as loaded up as a MAD article. More space. I like that.

CRACKED INTERVIEWS THE RADIO KING: Nanny (the sweet one) goes to station WARP and discovers that the guy in charge is a real chiseler. He doesn't care about you. All he wants is a couple of bucks. Well, can you blame him? I thought he was going to ask Nanny out at one point but he didn't. Nanny does it again but, honestly, I'm getting a little bored with these coming at the end of every issue. Can we break it up next time?

Final Tally - 5/3/5 A real nice one. No spiders or monsters but ugly people saying "Shut Up!" to other ugly people. How can you go wrong?

BACK COVER: Great moments in History. Some Indian guy invents an umbrella by lifting an elephant's ear and standing underneath. OK but nothing to sing about.

Overall, this is a great issue. There are dips here and there and a startling lack of Fonz antics but still... I'd recommend this one highly. It has a nice percentage of hits and only a couple of dips.

What about next issue? You ask? Well...we might just be able to keep this up.

NEXT ISSUE: [No Preview available]
Posted by Turbot's Finest at 1:06 PM