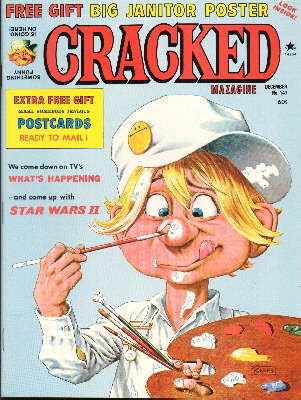 What a great cover! We haven't had a cover like this for a while. Apart from the taglines, no pop culture references. Just Sylvester and some goofiness. I missed this. Let's head in...

The Poster is another great Sylvester-themed picture. "Sylvester the Janitor!" with a little jab of comedy right under your belt. Ahhh, the magazine feels young again.

TABLE OF CONTENTS: Well, the contents look the same as always. That was fun while it lasted.

LETTUCE FROM OUR READERS: I don't know why but I've just been itching to dive right into the bulk of the issue as of late. Would you care to join me? Next issue - November 8th

STAR WARZ II - Sheep on the Planet Crackabor are being dewooled by Dark Badar! Why? Who knows? The folks at CRACKED might but I've forgotten. It's fun to think that they anticipated the sequel immediately. Too bad it's so CRACKED. Maybe they need a writer working for them who wasn't one of Milton Berle's favorites from 1949? I don't know. The art is great, as always, and there are some decent jokes but this just feels like space being taken up with a "guaranteed to sell magazines!" article. I wish The Fonz were in this. Kirk and Spock from Star Trek are, though. I'm not a Star trek fan but I did go to see the first movie in the theater. I fell asleep a lot. In the last panel, Spock and Kirk hold up a sign saying that they will return in Spring. Of 1978, I imagine. But, the movie opened in 1979 and it wasn't very good. Maybe I need to see it again.

What was I talking about? Oh Star Warz II. Well, I can assure you that every child with action figures was coming up with better stories than this one.

THE CRACKED HISTORY OF ART: More fun. Great art mixed with some good gags, including Dick Clark having a $20,000 pyramid built in ancient Egypt and Leonard Da Vinci's earliest drawings. He started as a cartoonist. The first drawing is a guy with a broken fife being handed a fife by another guy. The second guy says, "Take my fife, please!" A guy reading the cartoon look confused and says that he doesn't get it. I sure do! It's comedy you blockhead. Go piss up a tree! At four pages, this one is a sweet-smelling breeze.

EXERCISE MANUAL AND HOT DOG STUNTS FOR SUPER HEROES: Funny. It's a manual for super chin-ups and levitating push-ups and diagrams for Solitaire Tennis and the Home-Run Bunt. I like it. However, the artwork and the layout smells of the late 60's to me. I can't say for certain that this is a reprint but it sure might be. If anyone knows, give me a yell.

IF PROFESSIONAL PEOPLE ADVERTISED: Apparently this was considered such a ridiculous thing at one time that articles like this could be written. Lawyers and doctors and dentists advertising? Not on this Earth! Well, they didn't then. And, this article is OK. "Are you divorcing more, but enjoying it less?" My favorite line from the "Ned's For The Defense" ad. Actually, it's a fun article (it's been a pretty fun issue).

A CRACKED LOOK AT NEW YORK CITY: Here is my advice: Do not read the jokes. Look at the drawing. The drawing is superb. (It includes a store called "Sproul's" with the words "Smoke Cracked" on the front window.) It's very detailed and funny. The jokes get in the way. Sometimes you have to look underneath what they're actually doing to get to the good stuff.

My copy has two postcards in the center. "Greetin's From Herkimer County" and "Greetings From Brooklyn". They're great! Really, they're OK.

The Cracked Bookstore: Fonz for President still on sale!

CHATTERBOX WEEKLY: It's a completely frivolous entertainment magazine that actually is not much different from stuff you'll spot on the checkout line today. The cover features Telly Savalas -- Selling advertising space -- on his big, bald head! Lots of text heavy stuff here but it's worth a read. Chewbacca and Farrah and The Carter Family (not the singing one) and Jimmy J.J. Walker and everybody you could imagine. Jimmy J.J. buys Peter Frampton's new album. After listening to Side 1, he is heard saying "Now, I think I'll listen to side 2." I've seen this one re-printed in collector's editions so you should be able to run across it pretty easy.

THE CRACKED GUIDE TO MUSCLE DEVELOPMENT: All about getting toned up and in shape. High energy foods? A basket of light bulbs. How do you warm up? A winter jacket and a muffler. It's stuff like that and I think your tolerance for sheer silliness will determine how much you like this one. I love it so...Here's One For Your Mom!

WHAZ' HAPPENING?: It's fun. A good TV parody always makes me smile. But, again, there's something about picking a comedy and pointing out the things that crop up again and again in it that seems odd. That's what makes a sitcom a sitcom. Characters repeating themselves in slightly different ways week after week. And, let me be honest, loud, fat people on TV are damn funny. Two of them are funnier than Jesus should allow. What's the plotline here? Who cares? Are there jokes that seem to come from the Henny Youngman Joke File? Hell yeah. Do I like it? Surprisingly, more so than Star Warz II. Let's see what's next.

CRACKED INTERVIEWS THE WRITING KING: Actually, Nanny calls him the "CRACKED" Writing King. So, this one is filled with in-jokes. Mr. I. M. Amoron is lazy and not funny but Bob Sproul met him when he was picking through trash (both of them were, actually. Mr Sproul was looking for jokes.) and made him the head guy. At least Cracked can pick at themselves. Of course, that's where Mad has based most of its humor so... Who knows? This interview is the most fun in ages because it references many of the writers and artists and is having a good time. Maybe after this Nanny should take a vacation...or come to my house and massage me.

(BACK COVER) THE ANGRY ELEPHANT AND TARZAN'S SON: From the same guy who did the earlier Indian one-pager. A nice closer.

I liked this issue. Only the Star Wars parody made me shrug. The rest of it ranged from funny to time-passing. And, with No Fonz, that's all I can expect. This is one worth reading.

NEXT ISSUE: The Force ain't goin' nowhere!
Posted by Turbot's Finest at 9:24 AM