CRACKED #202: One of the oddest issues I've seen 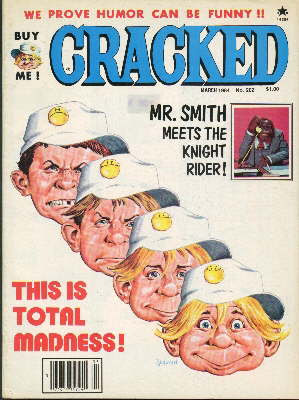 But, of course, it came out in mid-December 1983. I was 10. Christmas Vacation began. We went to the supermarket in Irondequoit (Wegmans) and I scoured the magazine racks for...Oh yes!The new CRACKED and there's a Christmas reference on the back! My mom had a mini-van. My Mom, my sister and I were driving around town as she ran last minute errands before the holiday celebrations kicked in. I'm sure I was hoping for some awesome gift of some sort (probably several) but I don't remember what it might have been. When my Mom and my sister went into one store, I sat in the mini-van. I remember that it was snowing. I remember that it was very cold. I sat, nestled into a seat, almost as happy as a boy could be, and read CRACKED #202. And, I loved it--- all of it. It was perfect.

We got home later that afternoon. Fire in the fireplace. Waiting for the USA Cartoon Express to start up. They'd been showing Christmas things. Maybe there was something Holiday-esque on that night. But, I do know, with hot cocoa in hand, I read #202 again and again...And, although it barely touched on the holiday, it was Christmas to me that year.

And now, some-odd years later...I'm reviewing the issue for whatever it is this is...Oh, Pierre L.! Where has the time gone? Well, let's dive in and see what we see.

The cover was great. #200 had MAD stuff on it. Two issues later...they're really going after them. I wonder if I would have seen this as a kid and thought "Hey! It's MAD! Oh wait..." It's such a sparse cover, though. MAD still had those elaborate covers. This is just the Mad to Cracked bit and a picture of an orangutan in a suit. "Mr. Smith!" I watched that show. Mr. Smith was in politics. And, the show bombed in the ratings and was canceled three days after this issue came out. So, when I bought it, it would have been off the schedule already...That's comedy!

POSTER: DON'T WASTE YOUR TIME reading this poster because it doesn't say anything. CRACKED! You've shanked me in the Funny Bone! And, I'm bleeding mirth!

TABLE OF CONTENTS: Rhoda Book - pru rrrrder Lots of writers and artists on this issue. 10 and 7, respectively.

THE DAY MR. SMYTH SAVED KNUT RIDER: Classic CRACKED parody. Bad puns, big panels and not too much to read to slow things down. There is something almost perverse about teaming a hit show with a show that is 72 hours from leaving the air forever...but that's the "Jaws-3D" era of CRACKED for you. This one has a nice goofy flow to it and...an awesome twist at the end...Conold Drumming and Webfoot have hacked into KITTY (Mr. Knut's car) and is making it go kooky. That's why they call in Mr. Smith. Did you like the way I backed the plot in there? This was one of my favorite parodies as a kid...I still like it.

CRACKED HOLD-UPS: Again, they are rather hostile but oh so funny. Page 13 has the set-up. Hold it up to light and page 14 gives us the kicker! King Kong, vampires and guillotines await!

WHEN THE WORLD RUNS OUT OF SPACE: Repeat from Issue #127. But, missing Page Four, the one where the government tries to convince everyone to kill themselves.

PRODUCTS THAT JUST MISSED!: This is as great as the Tamper-Proof packaging bit from the previous issue. Samwell House Coffee "It's good to the NEXT to the last drop!" 6UP didn't make it because of one lousy "UP". Radio dinners bombed. The "Fair Humor" Ice Cream bar tanked. Really Cigarettes put the filter in the center. Heins 56....No dice! And, my favorite, the "Baby Irving" Candy bar. Great article.

THE CRACKED WORLD OF OWNING YOUR OWN PHONE: Three pages of strips about cordless phones (one funny bit has a Mom hunting everywhere for the phone) and installing phone booths in your living room and taping you wife's yap shut to keep the phone bill down! I love the bit about the kid who is late getting home from a friend's house. His friend has a special sound effects machine that plays while they're on the phone. It has "Airport", "Taxidermist", "Dentist", "Bus Depot", "Health Spa" and "CRACKED". The kid hit dentist but I always wished he hit CRACKED...what did they sound like? ("Can I use a 'Woe not Woah' joke in this issue?" "We did that last time." "Gotcha. What about a 'gorilla of my dreams' bit?" "We did that two or three issues ago!")

ONE AFTERNOON AT A COMPANY PICNIC: And the oddness appears..Don Orehek, who's been with CRACKED for years...does this one-page bit that looks exactly like a one-page MAD bit by Don Martin...down to the art and down to the joke. The Three-Legged race is won by a three-legged man...That's MAD...Or is it something else?

YOU KNOW YOU'RE BORING WHEN: Oh, this is still CRACKED. Bill Ward's wacky drawings cover all that boring stuff...your doctor wants to record your voice and prescribe it as a sleep aid...your reflection yawns when you talk...stuff like that. The best part here is the border around the article...tons of yawning and sleepy people. I don't think I even noticed this bit when I was a kid.

WORD PLAY: Change of Pace is awesome! Actually, this is my favorite one of these. I didn't get any of them but I like them.

ANOTHER SIDE OF LIFE: Now...here's the weirdness...either CRACKED is at its most clever or I'm ill... This is a spot-on parody of Dave Berg's "Lighter Side" articles. It even has one of those bits above the title: "Birdseye View Dept". It even features an appearance by a man who looks a lot like Roger Kaputnik. It starts off calm on the first two pages. The subjects of the strips are Exercise, Diseases, Kids' Cereals and Dating. Then, they start to go goofy. Inflation (Sort of), Accordians[sic], Only Children, Vegetables, Dinosaurs, Bus Breakdowns, Baroque Pianos and Henways. Yeah, this is a parody all right, even down to the rather lame jokes and observations that MAD always had.

But...CRACKED has spent so long trying to imitate MAD that when they parody them it feels strange. The bad jokes in here are really not that different from the jokes CRACKED uses in a normal article. The strips subjects are the best part of this. Once you read them, there's almost no point in reading the actual strips. It was a bold move to parody the magazine you've trying to be for 25 years. But, it only goes to show how, at the base, no matter what the tones or structures of the two magazines, they always used the same dumb jokes.

As a kid, I don't even think I would have noticed what this article was supposed to be. I would have just thought "They're ripping off MAD again!"

ABSOLUTELY, UNQUESTIONABLY, POSITIVELY, UNDENIABLY, THE VERY, VERY LAST OF THE CRACKED LENS (and we really, really mean it this time, for sure!) Part XXIII: Thank goodness! New ones! I love the first one with "Very good class, tomorrow we'll learn to turn our heads to the right." But, on the third page, there's that Marlon Brando in the bath still that they've used before. How new is this one, I wonder?

FAMILY TIES: A parody done exactly in the style of MAD. So, it's a parody of a MAD parody of a TV show. It even does that MAD thing where all the main characters are on the first page and there are huge word balloons as they explain themselves. Then, we get six pages of panels filled with word balloons. They abandon the usual CRACKED pun-filled world and go into the slightly more observational land of MAD. And, it's fun. But, I don't know if they meant to force a compare & contrast but the Mr. Smith parody is more fun to read.

DON'T YOU FEEL STUPID: More of these! Although, these aren't as hostile as last issue's batch. "When you get up, rush to get ready for school, go into the kitchen and your Mom says it's Saturday?" "When you bend over to tie your shoelace and your pants split?" I don't think I remember seeing this article either.

HUDD & DINI: Have these guys been in any of the ones I've done or is this their first appearance? I'm doing a blog search and I don't see them. Odd. They've definitely been here before. Maybe prior to 127? These two wacky convicts get caught and brought back to jail by the Wily Sheriff! It's fun...And, it feels a lot like a variation on Spy Vs. Spy...

CRACKED INTERVIEWS THE STUNT KING: Repeat from #128 Nancy at the start. Nanny at the end.

Why is this so great? I'm pretty sure I went around the rest of the day, back in 1983, telling everyone to Shut-Up in an hilarious manner.

Maybe I didn't get any gifts that year?

What can I say? This issue is alternately Good CRACKED, Mediocre CRACKED and CRACKED at its sharpest. So sharp in its parodies of MAD that it was years before I spotted them as parodies.

As a kid, well, this was the best. As an adult, it certainly has its moments. But, it does feel like "A Magazine Divided". What exactly are they getting up to? Maybe the next issue will reveal something? Maybe not...Let's move on.

Next Issue: Well, they came back quick.
Posted by Turbot's Finest at 8:47 AM

I love this site