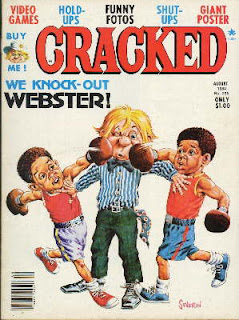 Hey! Webster and Diff'rent Strokes were kind of similar! I never thought of that. I do wonder why they couldn't have put something behind or around them, like a boxing ring and a crowd. I guess with the white background that places Arnold & Webster right into the CRACKED world. If it were more elaborate, it would be CRACKED in someone else's world. Yeah, that makes sense, doesn't it? Yeah...

POSTER: Nicely drawn and shaded. "In Case of Emergency...Break Glass" Sylvester is behind the glass dressed as Mr. T.

TABLE OF CONTENTS: Mr. T. is in this issue. "Jhon Smiht, prrfff rdr rdr" 4 writers on this issue.

LETTUCE FROM OUR READERS: Another CRACKED Fan Club Secret Message...I guess I would have been pissed if I sent away to the CRACKED Fan Club and then discovered that these messages were nothing but bad jokes. But, isn't there a chance that that's all they are? Well...Next issue...May 29th. I would have been 11! There is a list of kids names. The "Official CRACKED Reporters"...Lucky.

WEBFOOT: I owned this issue and I remember this bit. Some entertaining jokes about Webfoot being so small. Catrine's hair goes crazy. Webfoot has a Mr. T doll. And, someone is pulling pranks around the house...it's not Webfoot. After we learn our Weekly Lesson, we find out that it's Arnold Drummond! He's jealous of Webfoot...Didn't Arnold do this in a previous issue's parody?

What was with the Lesson Teaching in rotten sitcoms of this time? Webster, The Facts of Life & Diff'rent Strokes really strike me as the greatest offenders. The comedy wasn't funny and we had to sit through a lesson. What audacity on the part of bad writers..."My jokes aren't funny but I'm qualified to give you a life lesson." Get the hell out of my house!

HOW TO EAT BETTER FOR LESS MONEY: Repeat from #151

CRACKED HOLD-UPS: Snow, skating, UFOs and portages...Comedy! I do like this bit. I wish I could have you over to the house and we could hold it up to the light together...I wonder it that "Don't You Feel Stupid" bit is coming back.

THE CRACKED GUIDE TO JOGGING: Repeat from #146

HUDD & DINI: The two convicts go to scuba diving school! They go underwater and get eaten by a fake shark! Back to jail! Is the Scuba Diving School in the jail? Is that a good recreation activity for a group of convicts? The Sea has its own laws, I guess.

IF TV SHOW WERE COMBINED: Now, the issue is picking up. Here we go...

"The A-Team and Webster" - A Hoedown of Hilarity
"Knight Rider and AfterMASH" - Comedy Ahoy!
"Lottery & Dynasty" - The Das Boot of Parodies
60 Minutes and The Dukes of Hazaard" - Death by Comedy! Can CRACKED be arrested for this?
"Dallas and Diff'rent Strokes" - J. Er, Sewer Ellen and Arnold...Love it! It's nice to see Dallas in here. At this point, they were deep in their #1 or #2 struggle with Dynasty. I love Dallas.

VIDEO NIGHTMARES: Oh no! We see kids sleeping and their nightmares...Joey is going to set the new record when his baby brother pulls the plug! And, then the baby boy puts the plug in his mouth! Awesome! A girl is given 500 quarters but the arcades are closed due to the "Lithuanian Pizza Baking Holiday"! Oh, the Lithuanians! One boy loses his thumbs. It's a fun article that has a few real smiles in it and is chaotic enough to carry you through the four pages. And, of course, it's video game stuff.

THE THREE MOOSEKATEERS: A parody of The Three Musketeers that's pretty good. Pathos, Quartious and Sid fight some evil folks and they joke a lot...and there's a giant hand and a giant "SPLAT!" "One for ALL and the rest of us use TIDE!" "You drive a hard bargain." "No, I don't. I drive a '62 Palamino." It moves along nice. I don't love it but it's got it's charms. I do like when they go outside of the Present Pop Culture and wander around so..read it. Would ya, please?

THE CRACKED HOME COMPUTER I.Q. TEST: CRACKED, teach me. Lots of questions. A bunch of stills. Several stills from "The Lords of Flatbush". Someone at CRACKED must have known someone who made that film. Anyway...
A few sample questions:
5) Dig Dug is
a)Ronald Reagan's pet name for Nancy
b)A home computer game
c)Both A and B.

12) What is output?
a) What an angry mother tells her son to do with the garbage
b) What American workers are paid to produce, but don't because they're too busy taking coffee breaks.

21) What is a CPU?
a) The wrong way of spelling CUP
b) The person your father goes to on April 15 to do his income tax

29) According to studies, which member of your family will most likely NOT use your new home computer?
a) Juanita your Spanish maid
b) Fluffy your whitehaired poodle
c) Larry, your brother who got lost in the jungles of the Arctic and has not been heard from since 1943
d) Anyone who didn't chip in $40 to buy it

It goes like that. As you read, it's a mix of "Hey, that's pretty good" and some not-so-pretty-goods. But, I say, read it and try it.

Well, the new bits are decent. The repeats are fun. But, they're still repeats so that's not so good. I don't know. When I was a kid, I remember loving this issue. As an adult, it doesn't feel like it ever gets started. Well, we are truly winding down now. Let's see where we go next.

Next issue: All right! Let's keep the Pop culture Team-Ups Cooking!
Posted by Turbot's Finest at 10:33 AM