CRACKED #206: This one was inevitable 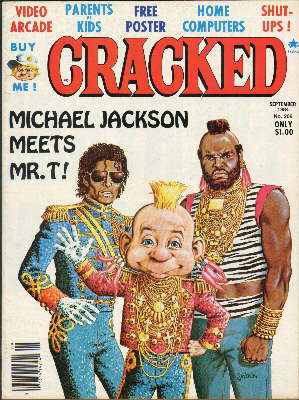 Hey! The magazine's a dollar. How long has that been going on? Back at #127, it was 50 cents. Comedy is expensive, folks. Just ask The Sprouls.

Again, why is there nothing in the background here? Regardless, Sylvester combining Michael and Mr. T is cool and, yes, I did buy this issue when it came out.

POSTER: Pee Yellow! "Everybody Makes Makes Mistakes" Do they ever! That yellow is killing me but the jokes are delightful.

TABLE OF CONTENTS: "Marcus Absent, pruf rdddddr" Did they do that one before? 9 Writers! This issue should be hilarious.

THE A-A-A-Y-Y TEAM: Wow. They loved this show. Michael Jackson's silver glove has gone missing and he's hired the A-A-etc. Team to get it back. Mr. T counts Michael's 8 Grammys. They run around a lot. There's chaos and, in the end, they save the day...and, oddly enough, the panels on the final page are all on a giant stamp (No. 78). Like the other A-Team bits, this moves fast and has some fun in it. I don't think there are any new jokes about the show here but the addition of Michael makes it worth a read.

CRACKED HOLD-UPS!: Again...great...Find some light. Take this page. Hold it up. Do not place directly in flame

CRACKED LOOKS AT COMPUTERS: "Computers will change the way the world goes about its business..." Gangsters shoot computers for squealing. Computers have their own Christmas parties. They go on strike. Dracula will get his own computer to find people with certain blood types. The Pentagon has "Original", "Duplicate" and "Triplicate" computers. Couples that aren't talking to each other speak by computer. And, of course, there will be "A computer that helps select the right computer for computer customers". It's almost right about the way computers work now but it's got that little CRACKED Twist that gets me downstairs, if you know what I mean.

FUTURE INSECT MONSTER MOVIES: Repeat from #125 and THOSE CRACKED MONSTERS.

HUDD & DINI: Fake Pools! Those goofs got caught out again!

SNIDE GUIDE TO CAMPING: I don't mean to be a jerk but this looks like an article from the late 50's, early 60's. I don't know where exactly it's from but, boy, it feels like a repeat. However, as I can't prove it...There are jokes about setting up tents, pup tents, (it's filled with dogs) and bear attacks. There is a CRACKED catalog for campers page. A sleeping bag is an enormous bag. The 12-Piece Food Mooching Kit is used to get free food from fellow campers. It's like that and it's pretty good. At three pages, actually, it feels like it doesn't quite really get rolling, which is strange for CRACKED.

THE ABC'S OF VIDEO: Hmmm...I got a little tired just looking at this one. 4-line poems about video games for each letter of the alphabet with wacky pictures included. I read it and then lost interest and then started again...Let me pick my two favorites:
"J is for the joystick
That you move around and 'round.
Ever wonder why you've scored so low?
You're joystick's upside down!"
A dumb kid drinking Space Cola goofs up, big time.

"Xmas is a time of love
And for sermons by Pastor Pav.
But most of all it's the time of the year
To get games that you don't have."
A kid is sitting on Santa's lap. He says "I want any, but mostly all of the 37 games on this list." I think Santa is giving us a look. I love the way the poem uses the name "Pastor Pav". That's some fine rhyming, everyone.

ONE LATE AFTERNOON IN A BUTCHER SHOP: Funny one-pager. Comedy Poultry...Find It Here!

IF KIDS TOOK OVER COMPLETELY: I never wanted to take over completely when I was a kid. I just waned to have fun. Was that so wrong? This article is exactly what you'd think...grown-ups have to be home by 10 and in bed by 11...supermarkets would no longer sell brussel sprouts and spinach...streets would have names like "Mick Jagger Drive" and "Lois Lane"...water fountains dispense cola...wow...this goes on for three pages...Mr. T becomes president. (This drawing of Mr. T is pretty hilarious. It looks like Burt Reynolds with a Mohawk.)...Kids get better allowances and all that sort of thing. It's not an article that really grabs me because it's so obvious. But, please, read it and tell me if I'm crazy. Maybe this kicks arse...?

ABSOLUTELY, UNQUESTIONABLY, POSITIVELY, UNDENIABLY, THE VERY, VERY, LAST OF THE CRACKED LENS (and we really, really mean it this time, for sure!) Part XXV: A giant spider. Awesome! "Quick! Who in here's had the highest score on 'Centipede'?" I laughed. Nice to see it back. Four pages of good goofs with fun on your foot!

THE CRACKED WORLD OF MUSIC: Michael Jackson for President instead of "Jessie [sic] Jackson". A couple of really gross people play loud music in their apartment. One kid thinks that everyone is watching Empty TV. But, it's M-TV! Oh yeah! A guy named Vinnie wears an "I [heart] Pasta" shirt. The older generation still hates that rock and roll! A girl is taken to see "the Police" on her birthday. Squaresville, Baby!

MORE PRESS MISTAKES!: It's funny. "He put reserved signs on the seats of all of the important guests." A fellow is shown putting "Reserved" signs on people's big fat butts! "Your carpet dealer can be found if you get your yellow pages, and start looking under rugs." You can guess what the lady's doing here. I like this article.

CRACKED INTERVIEWS THE HAMBURGER KING: Boy, this one feels like a repeat, too. It's the Old-Style Nanny and there's a political joke at the end that feels dated but...I'm having a tough time gauging who the political figure is so I could be wrong. If anyone can tell me if this is a repeat, that would be great. But, until then..Mr. Mac Dandy own The Hamburger King and he rips everybody off with cheap meat and all sorts of chicanery...Nanny talks to him, gives him the guff right back and then meets Randy MacDandy, their clown. It's a swift five page goof on fast food. Fun.

There's wisdom in those words.

BACK COVER: Great Moments in Politics...Oh, those dictators!

Well, it was a CRACKED journey. I'm just nagged by the fact that I'm missing some of the repeated material here. But, this issue isn't a bad one. It's average CRACKED and that's all I needed then and it's all we're getting now.

Next issue: More of the same.
Posted by Turbot's Finest at 11:35 AM