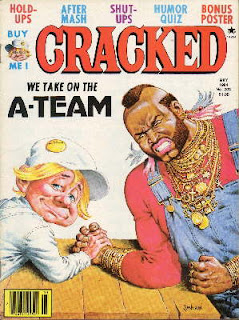 It says "The A-Team" but we know it's Mr. T. I wonder if they ever covered the Mr. T Animated Series? It's an odd cover because it's not much of a joke. Sylvester beats Mr. T at arm wrestling? Is that actually funny? Or is it something else...

No, I think it's meant to be funny.

POSTER: Pee Yellow and Black! The room is condemned! Your room! Oh no! This one seems like a "We've had this one sitting around for years. Let's use it now." one.

LETTUCE FROM OUR READERS: Next issue - March 6th. They are offering a chance to become an Official CRACKED Reporter - List your three favorite TV shows and win a chance to have your name appear in CRACKED. Odd...the address is in Madeira Beach, FL. Did B. Sproul leave NYC for Florida? As cliche as it sounds, that may have been what happened. Of course, that's just a guess.

THE A-A-AYY TEAM: This parody is awesome because of all the video game stuff. Someone is fixing all the video games at Glade Arcade down at the Scubby Doo Celebrity Mall so kids win tons of free games and never lose. Star Raiders, MACH 3 and Q*Bert get a mention. Excellent. I was wondering how they would justify another A-Team bit so soon after the last ones. Mix in Video Games! Video Games and Mr. T = A Formula For CRACKED Success. Of course, by early 1984, we had experienced the video game crash of 1983 so the First Round of Video Games was fading. But, hey, CRACKED is CRACKED when it's CRACKED! The article does end by admitting that Mr. T is everywhere, as it should be.

CRACKED GUIDE TO WINTER SPORTS: Excellent one. Maybe it's because I like Winter Sports, I don't know. But, this one has a fun announcer who takes us from Skiing to Ice Fishing to Sledding to Ice Skating to Duck Hunting to Heavy Petting (On The Couch). The jokes are older than ever but this one moves very fast. Not having to focus on one sport means that when they run out of old jokes...they go on to the next bit.

CRACKED HOLD-UPS!: Still great times. The bottom one where the golfer says "What's par for this course?" is kickass. This is a good addition to the magazine's regular articles.

HOW THE ADS OF TOMORROW WILL EXPLOIT THE ENERGY CRISIS: Repeat from #168, except they've changed the Cadillac Cub model to a 1984.

DON'T YOU FEEL STUPID: Well, this one's less of a great regular article. Spelling words wrong, breaking knobs off of TV sets, splattering ketchup everywhere...it's an encyclopedia of things to make you feel stupid...Did they do a CRACKED Collectors' Edition of "Stupids"?

THE CRACKED HISTORY OF THE AUTOMOBILE: Repeat from #167.

WORD PLAY: Still a breath of fresh air (that feels like it's in the wrong magazine) in the center of a now-uneven publication. Breaking A Promise! Awesome!

THINGS YOU SHOULD HAVE DONE: Fun article that feels like it might be a repeat. (Two reasons: 1) mention of Farrah Fawcett & 2) a guy calls himself a "clone" - CRACKED circa '77-'78.) But, I don't remember it from anywhere else. "Look at the problem in the left panel. Can you figure out what you should have done beforehand to have prevented it?" The first one has a left panel with a wife, husband and son staring at their burnt-down house. Then, you flip the magazine and the left panel shows the boy throwing away his Chemistry Set. Stuff like that. I applaud CRACKED here. They are using the same old jokes but putting them in a different format. The activity of turning the magazine every few seconds makes this article memorable, even if the jokes are not of the highest caliber. I do love the house in the swamp. How would you live there? And, as always, the closer is a really bored kid...who should have bought CRACKED!

AFTER M*U*S*H: No 10 in the Ratings of the 1983-1984 season. Ironically, the Network put it up against its issue mate, The A-Team, and Mr. T and pals wiped the floor with After Mash. So, my first thought of "Why this show?" is answered (the high ratings thing). I only vaguely remember watching this show. What's funnier that the show or this parody is a bit from Not Necessarily The News on HBO. "First, there was MASH. Then, there was After MASH. Now..." We see two Koreans standing in and empty field. "Before MASH!" One turns to the other and says "When are they going to get here?" Best MASH parody joke ever!

THE CRACKED HUMOR QUIZ: It's THE CRACKED LENS where you pick what goes in the word balloon...Again, another tweak on the format. Each movie still gets three possibles...yes, Henry Winkler appears in a still from The Lords of Flatbush. Oddly enough, the word balloon covers (I think) Stallone's face. It's fun to do this quiz once and then carry on...But, The CRACKED LENS was the one part of this mazagine's format that didn't need tweaking. So, enjoy and carry on to Nanny.

CRACKED INTERVIEWS THE 3-D KING: Nanny's breasts are at her largest in this article. Possibly something to do with 3-D. I would go see the 3-D film called "The Bean That Attacked Boston". Sidney Schlock is the 3-D King and he is preparing E.T. 3-D...hmmm, why does this sound topical? People have troubles with the glasses and...there is a strange typo where Nanny mentions the film "Robotron - The Killer Robot Who Wasn't Very Nice" and we see the poster that says "Robot Man - The Killer Robot Who Wasn't Nice." However, the audience's reaction to 3-D toothpaste is awesome and worth the price of admission. Five pages of fun 3-D gags. Odd that they love monsters so much but kept so far from slashers. I bring that up because I was a kid who loved both and this was when I bought the magazine... An article on kids trying to sneak into the slashers or hearing secondhand stories about them would have been fun.

BACK COVER: One Afternoon in the Big City...Great one-pager. It has a video game punchline, which I love. But, what's with the colors? Pee Yellow background. All text in black. And, the panels are a sort of baby blue...Strange.

Well, they are trying to do some new twists on old material. And, they have found a new subject to base a lot of their covers around. But, we'll have to see. Most of this issue is Average CRACKED. The tweaks do give me a feeling that are thinking about ways to keep folks reading but will it be enough? What's up for the next issue?

NEXT ISSUE: Keeping it fun.
Posted by Turbot's Finest at 8:45 AM