CRACKED #201: I remember buying this issue 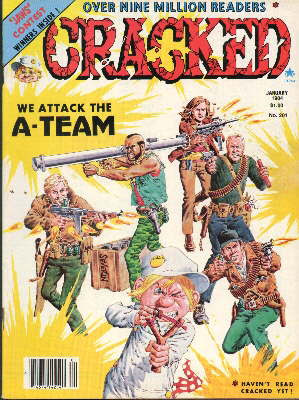 This one came out at the start of 1983. I was 10. I probably purchased this in Mid-November as Fall was kicking the leaves off the trees and Winter was sneaking up on me in time for Santa's return. So, what that means is this...this issue, regardless of quality, is something I am going to get a kick out of.

Loved the Cover as a kid! I've mentioned my journeys with The A-Team before. I only saw, maybe, three or four episodes when it originally aired. (Sorry, I was a MacGyver man.) I read more parodies of them in CRACKED. That's not a bad thing.

POSTER: I hung this one on the wall! But, there was too much reading on it. Folks preferred hanging posters with a more immediate kick. There's a big red dot. It's a poster from the (Pee Yellow) State Environmental Commission. Red means air pollution is terrible and that you should evacuate the area immediately. When my Aunt Cindy read the poster and looked at me saying "So, why haven't you evacuated?", I took it down.

TABLE OF CONTENTS: I. Emma Dork - prrf rdr I believe, as a 10-year-old, that that joke would have been the funniest thing I'd seen in ages. Not only did it say "dork" but it was in the official credits of the mazagine.

LETTUCE FROM OUR READERS: Next issue - December 13th (I really remember this one!) "Dear CRACKED, Loved the cover for #200. It really illustrates how you've been nuking your competition for many years. You're always first to do the hot movies and you're just out to make us laugh instead of depress us. CRACKED is the best magazine in the whole world! -Mary Ozimok Atlanta, GA" "Dear Aunt Mary, Thanks a lot and give my best to Uncle Fed." Elaine Ozimok is our Current Editor. "JAWS" Contest Winners - 1st Prize - Donald Phelps II, Oxnard, CA Congrats, Donald. Although, I think CRACKED may have chosen the wrong summer movie to back but...

THE A-A-AYY TEAM: I had hardly watched the show. I still have hardly watched it. So, I didn't get all the jokes and...I still forget that there was a woman in the team. This bit is filled with all the normal super-stale jokes but there are a few good ones. The lady's face as she sings Tomorrow. The old woman holding up the Ban Roll-on: "She's already got protection!" The bad cops with the huge speakers sewn onto their shirts. The bits at the "Run and Torture Amusement Park" always made me smile, especially the three panels through the fun house. And, of course, the final panel where TV cops from the past dress like Mr. T...Columbo looks fine...but Fish and Barney Fife are hysterical!

Yeah, I like this bit. The corny jokes are as stale as ever but there are enough moments that make me smile.

THE CRACKED GUIDE TO BICYCLE MOTOCROSS: BMX! This one has less of the "caption is translated into bad puns by the drawing" thing. There's a look at a Typical Race Track with "Whoops" and "Ouch" and "Berm" clearly labeled. There are the entertaining "levels". The kid racing around his coffee table makes me laugh. And, this has one really great, great bit...When they're discussing safety....
"And since we're on safety: never drink paint." We see a kid with white all around his mouth and holding a can of "Ace White Paint". He says "I thought it was a vanilla milk shake." "It's got nothing to do with BMX, but it is a good safety tip." Fun!

Possibly, I am experiencing several levels of nostalgia here. 1) I remember buying this issue from the Wegmans in Irondequoit as we visited relatives. 2) The Holiday Seasons nostalgia of 27 years ago is mixing with the nostalgia of today. That's good Nostalgia! Maybe that's the only way to love this run of issues?

CRACKED HOLD-UPS: Love it! You get half of the gag on page 17. Hold it up to light...Page 18 appears and mingles with 17 and there is hilarity. I always liked the lady about to go off the cliff. Strangely hostile article, though. Maybe it's the "Hold-Up" thing. One of these is a hold-up. There's a Police Line-Up. (Line-Ups!) A woman about to fall of a cliff. A car crashing into a house. People stranded on a tiny island. A woman in a cannibal's pot. Still, hostile but yukariffic.

WHY IS THERE A DIFFERENCE IN YOUR PARENTS AND OTHER KIDS' PARENTS?: Odd title. Because it's one of their "compare & contrast" articles. Your parents on the left being ridiculously strict and "their" parents letting their kids get away with murder. So, the title is more of a rhetorical question attached to the article than a lead-in. Interesting. Examples?...Report Cards: Yours: "So what if both your arms were broken, what's the meaning of this A minus in P.E.?" Theirs: "Let's see. I promised you $5 for each 'A', so that's $2 for the 'D's, right?" Friends: Yours: "But mom, everybody's going to the dance." "I suppose if everybody jumped off a cliff you'd do that too." Theirs: "Mom, we're going to go jump off a cliff." "Have fun, dear." CRACKED is read by the "other" kids in the end. Breezy article. The "cliff" bit is funny but this is neither good nor bad.

DON'T YOU FEEL STUPID WHEN: These are rather extreme stupids. "When you rob a bank in New York City and get mugged on the way to the getaway car?" "When you make a perfect somersault dive off the high diving board and then finding out there's no water in the pool?" "When you break your leg while buying a pair of skis?" Stuff like that. The A-Team must have raised the violence level here. Slightly odd article. It just feels a bit off. Tough to describe without typing out the entire thing. I'm not doing that.

A CRACKED LOOK AT HOME COMPUTERS: Fun article. Random several panel strips. A "Glossary". And,a few lists and diagrams. A kid is given an actual apple by his parents. A kid watched "Dukes ofa Hazzardosa" for his Italian class (on the computer). A kid gets punched in the head (by the computer). And, a man subtracts 12 from 1500 incorrectly (on the computer). I can't wait to do that CRACKED Collectors' Edition on Video Games. I like the layout of this one. Not so rigid, more casual. This would have appealed to me as a kid.

WORD PLAY: It continues to be entertaining and I continue to get none of them right. Watch Out is my favorite.

AND YET ONCE AGAIN STILL MORE FROM THE CRACKED LENS: Repeat from #161. Will there be new CRACKED Lens before 212?

TREE'S COMPANY: Issue #156 was the first Three's Company parody. This one has some sweet Furley in it. There is a joke about a tree with hands. That's a Palm Tree. There is a big food critic going to Jack's restaurant. So, he needs the cast to help him out. Holy Crap! It's wacky! I love the moment when Jerk is shaking Mr. Surly for giving the "critic" cat food and Mr. S turns to us and says "Admit it folks. You haven't seen a great plot like this since The Honeymooners rerun you watched last night." Yes, pointing out how uninspired shows like this can get at the end of the article is now becoming a CRACKED cliche but...This is a charming parody. I like comparing it to the one from five years ago to see what they've done to the show.

I'm being very forgiving to this issue. Really, it's no different from the previous ones. The articles have just stayed with me for a very long time.

NEW TAMPER-RESISTANT PACKAGING: One of my all-time favorites. It takes tamper-resistant stuff to the extreme. Cigarette packages now have every cigarette separated by plastic. Hermetically sealed toothpicks in little test tubes. Peanuts - "Inside 200 Individual Safety Sealed Peanuts" The best is the Tamper-Proof TV dinner. The top and bottom covers are sealed and popcorn kernels are placed inside the ridges. When it's done cooking, the popcorn pops and blows the top cover off. I like this bit.

YOU KNOW YOU'RE SKINNY WHEN...: I could have sworn this was part of a "Skinny/ Fat" article from a past issue but I can't find it. It's just one-page of jokes about automatic doors and being used as a tent post. Strange filler bit. It's not really funny.

BACK COVER: Sagebrush. I applaud using a "Woe not Whoa" joke on your back cover.

Yeah, you know, it's not the best issue. It definitely fades in the second half but, in the first half, I was right with it and enjoying myself. I think this might be as good as Latter Day Sproul gets.