CRCAKED #180: Wow! It's been a while since we had a cover like this 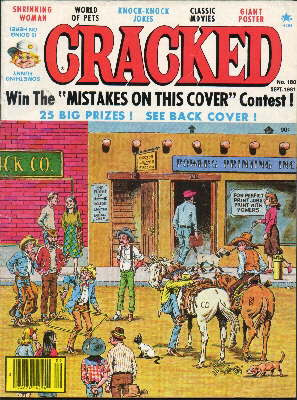 No Pop culture stuff here! It's a "Win the 'Mistakes on this Cover' Contest!" It's a somewhat Old Western-type street with mistakes galore! I spot 1...2...3...4! 4 mistakes! Give me my wonderful prizes, please. The prizes are listed on the back (along with the rest of the painting) but they're also listed inside so we'll touch on them then. Hey! There's a background to this painting! Oh my... A Whole New World...

The poster this month is THE CRACKED PUBLIC SERVICE EYE TEST. It involves saying words like "asparagus" really loud and looking around to see if people heard you. If they heard you and you see them hearing you, then your eyesight is awesome. No...yellow... background...here. Must be the special cover.

TABLE OF CONTENTS: "Lucus Over, prf rdr" "See Page 19 for contest details!" Feel free to jump ahead to Page 19.

LETTUCE FROM OUR READERS: Next issue - July 7th. Someone does mention the little Saboteur guys who were popping up all over the last issue. You know, I have to focus really hard to see them, most of the time. They do a decent job (at least, now they do) of blending them in with the surroundings.

THE INCREDIBLE SHRUNKEN WOMAN: A parody of The Incredibly Shrinking Woman with Lily Tomlin. A movie that was already a comedy so this parody is kind of a bit of a shrug. It's not really that funny and it made me think "I wonder if that movie still holds up?" They do include the ape that she pals around with, so that's a plus. At 7 pages though, I got to give this one a "Thumbs in the middle". It breezes by and I remember reading it as a kid and liking it but now...Ahhh...Let's hop to the next one.

THE CRACKED WORLD OF PETS: A series of several panel comics detailing problems with dogs, turtles and carnivorous fish. I actually really like the art in this one even if the jokes aren't up to much. Some of the reactions of the people (like in the "give away the dog" bit) save them. Not bad. A bit like this can't jumpstart a slow issue but we're holding steady.

WHEN HOLLYWOOD TOTALLY TAKES OVER WASHINGTON: Ronald Reagan hiring Sinatra as a Senator.The national bird has been changed to Tweety. It's more or less what you'd expect. Carter brought in a lot of peanuts. Reagan brings in the Hollywood Glitz. The last panel, however...Ted Kennedy preparing to star in a remake of Saturday Night Fever. Godspeed, Ted. I would have loved to have seen that movie.

First Prize - Your own personal Video Recorder (Tape MASH! All the time!)
Second prize - Popular Atari Video Games (The fabulous game that you play on your own television!) I don't think it's the system. I think it's just some games.
4th to 25th Prize - One year subscription to CRACKED!

Should be fun. Good luck.

YOU KNOW YOU'RE UNPOPULAR IF...: Two pages about a lot of people allowing you to get hurt because you're unpopular. Enjoy!

CRACKED WAYS OF CONSERVING WATER: Have they done a bit similar to this already? Don't waste water! Shower on Monday but rinse off on Wednesday. Eat all three meals at the same time. Let your dog lick the dishes clean. Make coffee with cream soda. Paint your lawn green. There you go...Several water saving tips from CRACKED. They're amusing but not actually that crazy. Just a little "goof-goof-goofy."

A CRACKED LOOK AT THE WORLD'S WORST 'KNOCK KNOCK' JOKES: Oh dear. Two pages of clutter and bad jokes. I'll just hit you with the intro and the closer. Intro: "Knock Knock." "Who's there?" "The delivery boy." "The delivery boy who?" "The delivery boy who's here to deliver the additional cold cuts you ordered for this inane Knock Knock party. Now, let me in." The whole shebang ends with: "Knock Knock." "Who's there?" "Nobody." "Well, I guess that puts an end to that." And, yes, the Frankenstein Monster is peering in on the top right. Either through a window, a hole in the wall or reflected in a mirror or it's his image in a painting or photo. I can't tell.

CRACKED'S SEQUELS TO CLASSIC MOVIES: A King Kong Sequel where they take him to the hospital. (King Kong Lives). A Wizard of Oz sequel where they take Dorothy to an asylum. (Return to Oz). Those are two quite good ones. There's a Gone With The Wind sequel that could be like Scarlett but I've never read or seen it. And, there's an Airplane! sequel, which is startlingly unfunny. Airplane! is very close in style to CRACKED so you'd think they'd get a joke out of it that's funny...No. No, they don't.

CRACKED'S UNUSUAL GIFT CATALOG PART II: Want a pair of "Ice-o-Metric Pants"? Well, here's your spot. Captain Kangaroo is hawking the new "Repel Wreath" to keep Vampires at bay. Not hot young vampires, I hope? There is a funny one here...A nun with a huge habit on is advertising the "Umbrella Hat". "Adjustable chin strap keeps hat secure even while sleeping!" It's two pages and it's fine.

THE CRACKED WORLD OF MOVING: Another one of these in the same issue. Are we becoming MAD? Four pages of these things with decent drawings and stale, stale jokes. I'm going to leap ahead.

PRESS MISTAKES!: These are OK. "Come in for free alterations on our drastically slashed suits!" A guy is getting fitted in a slashed suit. "Man arrested after being spotted by local artist." You can guess that one. Honestly? That Newspaper headline one from so long ago is much funnier. This is two pages and a breeze but nothing great.

ABSOLUTELY, UNQUESTIONABLY, POSITIVELY, UNDENIABLY, THE VERY, VERY, LAST OF THE CRACKED LENS (and we really, really mean it this time, for sure!" Part V: Funny? Yes. But, not quite as funny as usual. I don't know why.

CRACKED INTERVIEWS THE COMEDY KING: Henny Hope Carson cracks us up! Nanny and her nephew Dickie head over to his apartment. He has a wacky wife and some wacky kids. You'd think this would be funnier...Am I all out of humor? I don't know. Nanny looks great and the wife has a humorous moment or two but it's not enough. Sorry.

Well...it's not a bad issue. It's just not funny. It has bursts of HUZZAH! but most of it is terminally bland. I hope we can pick it up soon. What's next?