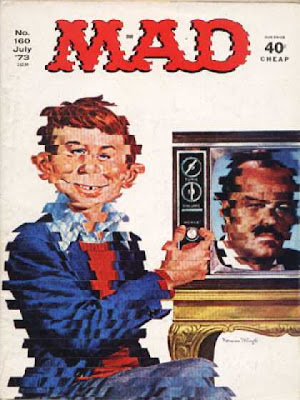 Neuman is The One True Man! Look at this cover. Rub it on your congested area and feel the mentholated fumes! This is comedy! This is the Glory! This is MAD...I love it so. And, hey DA!, is that Cannon on the television there? Hey, Cannon!

Will you go in with me, my sweet friends?

INSIDE FRONT COVER: MAD SPECIAL NUMBER TEN I've got three words for you...Blort! Dawk! and Glork! Bite it all others! Don Martin should be canonized by the Roman Catholic Church. St. Don Martin. "Down with relevance! Spread the irrelevant word...with...DON MARTIN NONSENSE STICKERS. I do not yet own MAD Special Number Ten. You just hold on, you ugly SOB!

TABLE OF CONTENTS: "Tears are the hydraulic force through which masculine will-power is defeated by feminine water-power!" - Alfred E. Neuman So true. What do you think would happen if I changed my name to Ghumdrop Vincent Neuman the First?

LETTERS DEPT.: Woah! Hey! "Just the other day I was sayin' to my wife: Those guys at MAD sure get away with murder! Peter Falk as 'Columbo' Hollywood, Calif." We love Falk. Have you ever watched Columbo? You should. (Pierre hates it. He loves Barnaby Jones. What do I have to say? F, Barnaby Jones!) Look at all the MAD Paperback books for sale! They are cooking them out.

And so many more. And CRAZY thought it was popular. Ha!

TELL-TALE COMIC STRIP BALLOONS: I'm warm here. Very warm. Why? Because Don Edwing and Bob Clarke have brought it around to me... A series of comic strip panels with word balloons that shank up the comedy! Por Ejemplo: Andy Capp says to his pal "You can count on me to be there if you ever need me Ol' Pal!" But, the word balloon is a large knife jabbing into his pal's back. Peanuts: Charlie Brown on stage saying "...which reminds me of another funny story." And, the words are in a bomb! And, the best...Veronica saying to Archie "Archie, I have to talk to you..." Her words are in a stork with a baby in its beak.

Oh...the love and goodness of this opening!

CANNONBALL: It's Cannon! And he's fat and he's always eating. A lady arrives at Cannonball's office saying her husband was murdered and she's under suspicion! So, Cannonball goes after whoever really did it. And, it involves a lot of eating! As always, I will not go deep into it because the comedy must be swum through and absorbed into your nether spots. The simple words I would say to you would not give you an iota of the comedy that Dick De Bartolo is rubbing right into it. God, drop everything and enjoy this! Aren't you a good person? Do you suck?

Ahhh, I love these articles so much. The text, the grey pages, the laughs and the loves. Sweet.

ONE DAY IN THE NORTH WOODS: Don Martin! One page with a HA HA! at the end. He never disappoints.

THE LIGHTER SIDE OF LEISURE TIME: Dave Berg is everything good and nice in MAD. He teaches me so much about the way we spend out Leisure Time. For examples: Two ladies talking. 1ST: It says here that never before in history has there been a civilization with more leisure time, and the means to enjoy it! 2ND: Is that what it says? Let me see...on Monday, I have my Painting Class! Tuesday is my Mah Jongg game! Wednesday is golf! Thursday is P.T.A. Meeting! Friday is theater night...and on the week-ends, we're at the house on Candlewood Lake...WITH ALL THAT TO DO...WHO'S GOT TIME FOR LEISURE?!" Does that sum it up for you? Yes, there are hippies and Women Libbers so everyone is covered.

A MAD LOOK AT SHEET MUSIC: "Almost Like Being In Love" With Jackie O. and Aristotle Onasis on the cover. "The Best Things In Life Are Free" showing people looting a store. "The Sidewalks of New York" show a dog dumping a fat load. "What's It All About, Alfie?" is our man...sweet Alfred. I love and laugh at this again and again.

MAD'S CORPORATE ECOLOGIST OF THE YEAR: Arthur Godly interviews Mr. Gregory Garble about what corporations are doing for the environment and to stop pollution. Actually, if I may be Frank rather than Ghumdrop, he doesn't seem to be doing very much. There's a garbage and smog and mess everywhere. In fact, they're doing more to sell pollution. God, I love pollution! I smell like crap!

A HIGH SCHOOL YEAR BOOK THAT TELLS IT LIKE IT REALLY IS: Rolling Stones High School - 1973 'Roller Yearbook The Principal is there through graft. The most Popular Teacher has apparently had sex with a lot of the students. They play sports, they do this...or even that. This looks a lot like my high school year book. I liked it so much it made me feel like a man...a man who remembered things about a high school year book! Feel free to own and enjoy the magical good time...God, I'm so drunk right now.

You guys want to go out maybe, after the review?

A MAD LOOK AT WEDDINGS: Sergio is petty cynical about marriage. From the Jewish wedding where the groom crushes the wine glass and has to get medical treatment to the people who care more about the buffet than the wedding, he squeezes it and I receive the fruits!

ONE DAY WITH A WISHBONE: A lot of people dying in Don Martin's work today. And I say, good riddance! Kill 'em all! Thank you, Don.

BACK COVER: "Keep America Beautiful" Oh no, someone put graffiti all over Mount Rushmore!

What an issue! What a wonderful magazine! My sides have split from the hilarity. Sometimes I wish this was CRACKED because

Congratulations to our brand new cookie man. YOu made it.