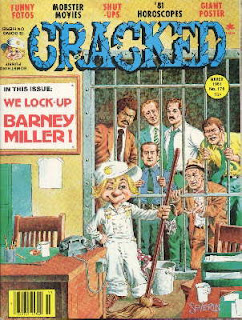 I'd no idea. But, I looked it up and, yes indeed, Barney Miller would have been in its penultimate season (Number 7) at this time. Well, good for Barney Miller. I was never a fan of the show. As I've mentioned, it has one of those opening theme tunes that dares you to keep watching, like Welcome Back Kotter or One Day At A Time. The 70's may have had "groundbreaking" comedies but their theme tunes blew. I believe that Barney Miller fits better into the 70's issues. Here it feels out of place. But, the actual cover is fine.

POSTER: Something about the words getting bigger because the wall is closing in on you. Oh Lord, that pee yellow is very bright on this one. Was this color really the cheapest one available? And, something just occurred to me...When I used to buy this magazine, I would never have removed the cover so I could hang the poster. And yet, presumably, kids did. Why? Why? Why? The cover is oftentimes the best part of the issue. Why would you tear it off of the magazine and then put it against the wall so the poster can stand out? Could you imagine the kid's room that was plastered with these? So much great art facing the wall, so much bright yellow facing out. Were these posters some sort of early solar power? If you covered the walls and let the sun in, would the energy power a car for 18 days? I guess the kid would never have to turn on a light. He just uses the glow off of his CRACKED posters. Now with more radium!!

TABLE OF CONTENTS: "Anita Glasses - prffffff rdddr" I see a drawing of Nixon...Oh boy, this should be great.

LETTUCE FROM OUR READERS: "Dear CRACKED, When I heard that a new CRACKED was out featuring my favorite TV show, I stopped eating my hash in a flash, made a dash and paid my cash to read your MASH which was a smash." Have they got the writers submitting letters? This issue has one of those "Statements of Ownership, Circulation...etc." Average no of copies each issue during preceding 12 months: 756,598. Actual number of copies of single issue published nearest to filing date: 855,918. Next issue - January 27th

BLARNEY MILLER: Blarney's office is going to be annexed by the Tricky Licky Laundry unless they can cut $50,000 in costs. They goof around for a while and then...they save the precinct! They get the money. How? Well, you can email me and I'll give you the answer. Let's leave some surprise. There are some nice moments here mixed in with all the regular terrible, terrible puns and plays on words. I haven't seen Barney Miller in ages but was it a pun-heavy cop show? I don't remember it being that but...if it was... You know what, this article farts along with a few smiles and giggles. It's a charming opening to the issue but really could have covered any TV show. It only rarely seems to go near the show its supposed to parodying. But, it's fine. A nice opening.

CRACKED'S FIRST (AND PROBABLY LAST) ANNUAL SOAP OPERA AWARDS: Awards given tonight are..."Best Disease Contracted By a Leading Actor or Actress" & "Longest Drawn Out Sequence In a Main Plot" & "Best Kept Secret by Either and Actor or Actress" & "Longest Suffering Hero or Heroine". Yes Ladies, Biff Hunk from "Tomorrow and Tomorrow and Smith" is nominated! Belinda Lynn-Ann Stengelheimer is also up there. The Dead, the Dying and the Severely Boo Booed gets a win so that's awesome. This article is wonderfully goofy and a nice parody of the excesses and conventions of soap operas. All the sorts of things that your average 10-year-old boy would know perfectly.

ABSOLUTELY, UNQUESTIONABLY, POSITIVELY, UNDENIABLY, THE VERY, VERY, LAST OF THE CRACKED LENS (and we really, really, mean it this time, for sure!): Oh the joy these bring me! 5 pages of laughs. My favorite here? Tough to say...Possibly the two guys looking at the lady who is wearing a flowery hat. "Why don't you ever wash your hair mom?! You've got flowers growing out of it!" Funny but...don't yell at your mother.

THE CRACKED HANDBOOK ON PERSONAL GROOMING: "Too Sloppy" and "Too Neat" columns alternating across three pages. Some fun drawings here but not too high on the Gag Chart! Dirty houses, stenciling graffiti, not knowing that an earthquake hit your house, typing vacation postcards...They like the things that are like that, my friends. It's three pages. It's a breeze.

MORBAD NEWS: A fake newspaper with some funny articles and only a few photos. I'm not a big fan of their text-heavy stuff but I enjoyed this. "Population Explosion Hits City of Solch" is about farmers exploding. They catch a bubblegum thief. Dinosaur hunting season begins. There's a Bigfoot bit and a vampire bit. At five pages, this may be a bit much but it's less pun-filled than most bits so I enjoyed it.

CRACKED'S HOROSCOPES FOR '81: Each sign gets a little blurb. Here's a sample: "Aries March 21-April 19 Aries have an inventive mind and healthy imagination. Unfortunately this seems to work against them because many Arieans believe they are under surveillance by either the FBI, CIA or MGM. Complaints about dentists implanting tiny transmitters in their back teeth instead of silver fillings are common." Leo's like to stand on stilts a lot so people look up to them. It ends with an Astrological Dictionary that sends me into Pun Overdrive.

YOU KNOW YOU'RE WATCHING TOO MUCH TV WHEN: Oh, the jokery! Exercise is a sweatsuit and Celebrity Bowling. Your wedding is scheduled around TV shows. You go camping with a small TV. No one eats while you watch Julia Child. Ahh...at two pages, it's harmless.

HOW MAGAZINES WILL ATTRACT NEW SUBSCRIBERS IN THE FUTURE: Best bit here? Business for Neanderthal Weekly advertises on Diff'rent Strokes. Mr. Drummond whomps Arnold's behind with a copy of their year-end issue and a special book that comes with the subscriptions. Loved it! Pretty entertaining bit. Free magazines in cereal boxes and milk jugs. Teachers will advertise magazines in class. Richard Nixon shilling for Humpty Dumpty Magazine. In the end, the magazines send all their subscribers to Tahiti. Great article. I enjoyed this, my sweet friend.

THE GREAT CHICAGO HEIST: A parody of 30's gangster films. Three goons steal all the glasses from speakeasies so no one can drink. But, they get put away in prison. But, they've stashed some glasses away...if they can make it seven years, they'll get out and the glasses will be theirs!

It's a charming bit. There are several text-heavy narrated panels but most of it is a breeze. Some funny drawings and some smiles. This is a good bit. I was, however, disappointed that The Talking Blob didn't show up.

CRACKED INTERVIEWS THE BOOK PUBLISHING KING: Here's a surprise...he's a shyster! Most of his books are junk. He'll buy whatever the latest big thing is and try to sell it again and again. He has the taste of a man who has eaten nothing but Big Macs for the past 20 years. Even Nanny is disgusted by the end...I've dealt with book publishers before and this brought back memories...memories where I think about kicking them. Let's move on...

BACK COVER: Something about horses and photo finishes...Dwell on it. You'll get the gag.

This was a pretty darn fine issue. The occasional misstep is to be expected...but they really kept up a nice roll on this one. Please, please, let this continue.

Next Issue: Pierre Get Mad!
Posted by Turbot's Finest at 9:00 AM