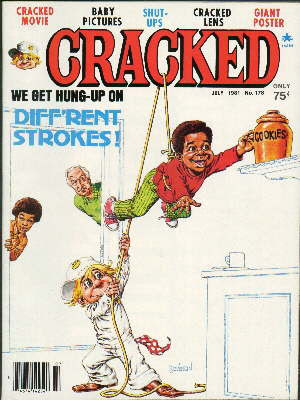 Let's please try to get this back on track. Please.

There's the cover, huge and proud. Isn't it something? I think it's the fourth or fifth time Mr. Coleman has been featured and every time is a joy. I am a bit disappointed in the background...again. Have a look at it. There's Arnold, Sylvester, Willis & Mr. Drummond. There's the rope and the cookie jar...But, look at everything else. The doorway, the counter, the shelf, the mug. They all look vaguely sketched in. Was this cover not finished? Where, in fact, is the rest of the picture? Isn't this kind of ridiculous?

Was Ghumdrop right about the quality of CRACKED?

POSTER: CRACKED Automatic Digital Weather Forecaster - There's a big blue box in the middle. If it's wet, it's raining. If it is moving, it's windy. If it's white, snow. Well, they're not proving much here. I had always thought that this was the Polish Weather Station?

LETTUCE FROM OUR READERS: Charming, erudite and oh so witty. "Are any of your writers ambidextrous? No, they are mostly Protestant, Jewish & Catholic. Hey HEY! They zinged 'em pretty hot on that one! You see, ambidextrous isn't a religious thing but the editor acted like it was and so we all ended up with gag all over our shoes! "Next issue - April 21st"

DIFF'RENT STROKES: CRACKED is so good...they don't need to fiddle with the title! Mr. Drummond drops his wallet out the window. Conold misinterprets Mr. Drummond saying he's lost all his money as "Dad is out of money!" So, all the kids band together to help him out. Babysitting, dish washing and pinching Conold's cheeks pull in $64.50. Not bad! But, in the end, Conold's gets his ass walloped with a book. And, Mr. D asks why they have the golf clubs out. "[To] practice diff'rent strokes, of course!" Take that, MAD!

MORE BELIEVE IT OR NOT: Is this becoming a regular bit like the CRACKED LENS? It is pretty amusing. My favorite: Two Arabs with coins. One is biting down on the coin. "In Syria during the fourth century AD, Syrians barely had enough money to eat (but they ate it anyway). Another one? A guy on the ground in the middle of the street. He's from a city that is so strict on jaywalking that residents sneak across the street in the middle of the night for excitement. Nice!

WHY IS IT THAT: Certainly, the drawings are funny. But, the observations are "Stand Up Comedian Day Olds". "Why is it that waitresses always ask how the meal was when your mouth is still full?" "Why is it that new and improved always works the same as before, but costs twice the price?" We're going to call a draw here. This bit was never funny in CRACKED or MAD. Move on, Elvis!

THE CRACKED WORLD OF STAYING SHAPE: MAD, unfortunately, does this one better. Their bits are always filled with hippies and women's libbers. This bit...nothing. The article is a series of random strips of varying lengths all about staying in shape. Hey! Sometimes when folks workout and such they get achy or get hurt! God, I miss that guy from MAD with the glasses and the pipe who always stars in these. You know who I mean? Davis Merkle? Isn't that his name? Oh wait, there is a fat lady in this... Does that qualify it as "Whack-ass" funny? Hmmm...

CRACKED'S LOOK AT SUPERSTITIONS: 13, black cat, umbrellas indoors. CRACKED takes them all and rubs them and rubs them until comedy sprouts! Yes, this is good. The drawings are funny. The jokes about superstitions are hilarious. In fact, they're so hilarious that I'm not going to tell you any of them for fear of comedy rupture! Take that, MAD! Bring on the yuks 'cause we got big-time HA HA! 's happening here!

HOW YOU PICTURE A BUSINESS OPERATES & HOW IT REALLY DOES: At a TV repair shop, trained technicians don't actually fix your stuff. Some guys kick your TV! A stock broker doesn't choose wisely. He closes his eyes and zoink! Stuff like that. We learn and we love. It's all thanks to CRACKED.

THE CRACKED MOVIE: Well, there was an actual MAD movie - Up The Academy. Rent the DVD and give it a try. It's surprisingly not-that-good-at-all. The script is about as generic as you can imagine. Maybe they should have hired some National Lampoon writers instead of the two guys who were going to write Top Gun? What do I know? Anyway...Mr. Sproul calls his regulars, Sagebrush, Sylvester, the Talking Blob and the Hang-Up guys to his office. Nanny's been kidnapped! So, they hunt her down through various and assorted fun-fun-funny bits...In the end, the kidnapper? Alfred E. Neuman! He's trying to sabotage their movie so it bombs like Up the Academy did! Well, it doesn't work. Mainly because this isn't a movie. It's an article in a magazine, which no one but me remembers. At least, Up The Academy is on DVD, letterboxed. Oh, CRACKED! This is becoming tragic.

ABSOLUTELY, UNQUESTIONABLY, POSITIVELY, UNDENIABLY, THE VERY, VERY, LAST OF THE CRACKED LENS (and we really mean it this time, for sure!" PART III: Ahh...relief. I don't know if MAD had a bit like this and, frankly, please don't tell me if they did. 3 pages of soothing balm. A little break before we return to the reality.

OTHER "NO FRILLS" ITEMS & SERVICES: A No-Frills Doctor lines everyone up with a big multi-thing stethoscope and checks everyone's heart at once. A No-Frills Pet Stores just keeps dogs in barrels. What are they? Who knows? The No-Frills Paperback Book is just a pile of pages. Same with the No-Frills Magazine (that magazine is CRACKED). Well, CRACKED certainly has a "no-frills" policy on its covers. This bit is amusing but not too stimulating.

LITTLE KNOWN BABY PICTURES: Thank Christ for the Fonz! They take baby pictures and put celebrities faces on them. Steve Martin says "Oops, well excuse me!" And, the Fonz talks about how cool the monkeybars are." The Beatles are there and so is Stallone. It's a bit of a disconcerting article but it brought a smile to my face.

Uh oh, I think I'm trying to coast fast to the end. I need to slow down and review and adore and show the CRACKED-haters where they can stick it. C'mon CRACKED! Prove me right!

IF NEWSPAPERS EMPHASIZED GOOD NEWS: A shot at satire and it's pretty amusing. "Chemical Dumping found to be very helpful" No more crabgrass! Of course, there's also no life at all but... Kind of a sad bit but then I guess the best satire is usually pretty sad at its heart. "Boston Firm Allows Employees to bring children to Work" Child labor. -- Well, some of it is kind of sad. "Hometown Girl Makes it Big in Hollywood" That's about a fat lady that celebrities use to empty out their pools at the end of the season. (She jumps in the pool.) That one's just odd because you can swim in a pool all year round in Hollywood...The joke doesn't work if you understand the weather. Satire and silliness...CRACKED's real strengths. Overlong articles & lazy jokes...Their big weakness.

CRACKED INTERVIEW THE VACATION KING: Pretty amusing bit. The guy isn't actually ripping anyone off. He sells budget vacations. You want to go skiing in the Alps. Some folks go to your living room and rig it up like a fake mountain. You want to tour Tokyo. You sit on a fake bus as slides are shown and folks walk by with building mock-ups, like parade floats. You want to go away for a while. Your house becomes your hotel. They even guarantee a day of rain in there. Actually, not a bad idea. If you can't get away for a vacation, why not try this?

There's wisdom in there somewhere.

BACK COVER: A monk invents the copy machine...and it's wacky!

Ghumdrop, bring on the stink!

Next issue: CRACKED or MAD? I don't know.
Posted by Turbot's Finest at 8:51 AM