CRACKED #175: A Little Variation on Our Reviews 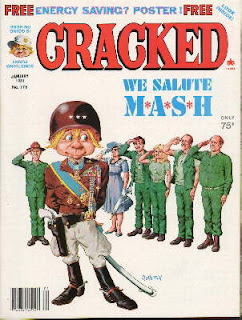 M*A*S*H is back! The cover isn't as great as the "jeep into the tree" one but it's fun. That white background glares at me, though. I do recognize this cover from my childhood. Either I bought this issue or my Cousin Kenny had it and I read it over and over again. We have now entered the era when I actually read the magazine. This issue came out in November of 1980. I was seven-and-a-half living the beautiful life of a French Canadian boy. In a year or so, CRACKED and You Can't Do That on Television would be my touchstones for comedy. Benny Hill wouldn't be far behind.

As the next few years of CRACKED progress, I will recognize more and more things. I'll keep you posted.

As the headline above reads, I'm doing the review a little different this time. I'm going to include the blurb before each article so we can get a full-on squeeze of humor from the Boys. Then, I'll throw out a little opinion on each. But, I thought I'd let their blurbs speak for themselves, unless there's no blurb.

TABLE OF CONTENTS: "It looks like Sylvester has all the attention he ever wanted. We guarantee he'll pass your inspection too!!"

LETTUCE FROM OUR READERS: "Next issue - December 16th" "Dear CRACKED, You really CLICKED with THE CRACKED LENS last issue. You've DEVELOPED a great feature that deserves to be PRINTED. -John Forrer, Atlanta, Georgia" "Dear John, Thanks. We hate NEGATIVE comments about our PHOTO articles."

M.U.S.H.: "We've watched this show for the last nine years and noticed that the cast is different with the arrival of every new TV season. It goes without saying that this gives your viewers cause fr concern (so why did I say it). We are mindful of the fact that actors desire to change their roles as well as their clothes (it must be awful to wear the same army fatigues for so long) and therefore, understand the need for replacements. So, with regard to any future cast changes, we'd like to see our suggestions given some consideration as we present the latest version of..."

Big blurb. Basically, Archie Bunker, Mork, Latka, the Fonz (Hooray!), Jennifer from WKRP and Deitarch [sic} from Barney Miller are all brought in as replacements amidst the yuks and laughs. In the end, Sylvester comes in for Eagleye. And, comedy reigns supreme.

The CRACKED "INSTANT STATUS" MAIL ORDER CATALOG: "There are three kinds of people in the world today - the rich, the poor and the poor who pretend to live like the rich. Yes, for some reason, there's a whole class of people in America who are in debt up to their Gucci sunglasses trying to show people next door that they're just as good as they are )when, in fact, the people next door are in debt trying to prove the same thing). Well, we don't approve of this, but as long as "Keeping Up With The Joneses" exists, then you might as well do it in a way you can afford it, America. Mainly, by acquiring your 'Look what I won' items from..."

Stuff you can buy to look richer. Empty appliance boxes, designer garbage, iron-on designer names for your clothes and stuff like that. It's fun but obvious. Very obvious.

IF OUR CURRENCY TRULY REFLECTED OUR ECONOMY: "Time was when our currency's conservative design accurately reflected our nation's conservative fiscal policy. Since this is no loner the case, it got us thinking what our dollars might look like today..."

George upside-down, really thin, underwater and getting marked up to five bucks. Three pages and it cooks along all right.

YE HANG UPS: A one-pager, four panel gag. With a "Diff'rent Strokes" joke in it! Nice.

ABSOLUTELY, UNQUESTIONABLY, POSITIVELY, UNDENIABLY, THE VERY, VERY, LAST OF THE CRACKED LENS (and we really mean it this time, for sure!): 6 pages of great gags. This article continues to make its own sauce...Comedy Sauce!

CRACKED HEADLINES: "EXTRA EXTRA READ ALL ABOUT IT! Do these words sound vaguely familiar? However, we keep getting letters from people who say they're such great fans of CRACKED that they don't read anything else. The truth of the mater is they don't know how to read anything else, but we promise not to let a word of this out. So, we've decided to keep readers informed by starting our own newspaper. To give you an idea of what types of stories we will be covering, take a look at these zany..."

They're not that zany, actually.

Hardly worth it, really. I couldn't even keep the capitalization going.

EVERY CLOUD HAS A SILVER LINING: "How many times has something really rotten happened to you - something like losing your right glove from the tenth pair you've bought in one winter or forgetting your bathing suit the first time you visit your uncle who's just had a brand new pool installed in his backyard. Well, these things could depress you if it weren't for the fact that usually when something bad happens, it's because something better is in the wings to take its place. It's the CRACKED philosophy that bad things happen because..."

You get a flat tire on the freeway. An earthquake hits and the freeway in front of you collapses.

You come up short at the supermarket so leave an item behind. That item makes everyone sick.

PROFILE OF A COWARD: "There are two types of people in this world - the brave and the cowardly. Most of us are familiar with the first type because Hollywood is forever making heroes out of them. Our national anthem even has the phrase 'land of the free and the home of the brave' in it. On the other hand, cowards are a difficult breed to identify since they rarely go outside and when they do, they hide. We here at CRACKED have decided that the public should be able to recognize this 'jellyfish' and so now give you our..."

Oh, those cowards! They get beat up a lot and scared by everything. Boy, the problem with reading these blurbs is they drain all the energy out of the article. Unless that article is absolutely stellar. This last one...not so stellar.

WHEN THE U.S. ADOPTS THE METRIC SYSTEM: No blurb. A pretty funny bit. I remember that St. Margaret Mary's school, where I went from 1-6 grade, taught us metrics. Then, I went to Christ The King for 7-8 grade. They taught the other way. The way most folks know. And, I was a fool. I didn't know gallons, quarts, hogsheads, miles or any of that. I failed several math tests because I had been taught differently. Oddly enough, the teacher must have thought I was joking because she never helped me learn the system she used. She just looked at me with confusion and then let me fail. Awesome!

Gregory peck needs to change his name to Gregory 8.8 Liters.

HOW THE POLITICIANS KEPT THEIR ELECTION PROMISES: "America is the land of promise...Especially at election time. Now that the elections are over CRACKED takes a look at..."

All right, I'll give you one and you can make your choice.

"Congressman Godfrey Goober promised 'Re-elect me and I will help curb inflation!'...Goober kept his promise! He named his new dog 'Inflation' and curbs him every day."

Another guy gives tax relief by sending aspirins with every tax form.

PARENTS! WE CAN TURN YOUR PROBLEM CHILD INTO AN IDEAL KID.: One pager showing how you can turn your slacker kid into a good kid. I'm not 100% sure what the joke here is. It's for parents whose kids don't agree with them or does stuff they don't like. I'd say this page is 20 years old but...I don't know. What's the point of this one?

HOW TO BE A SALESMAN: At the very end, they point out that the best part of being a salesman is counting the profits at the end of the day. We see a guy in "The Prophet Museum". He's counting the statues. "Moses is 23, Mohammed is 24, and Buddha makes 25!" There are some fun illustrations here but the article has so many groaners. I'm hurting my gut thinking about them. Sorry. Maybe this blurb idea was a rotten one.

CRACKED INTERVIEWS THE TIME SAVING KING: "Today, speed is everything. Wherever they can, people try to lop minutes, even seconds off the things they do. For example, we had lots more to say in this fact-informed introduction, but we know people won't read it. In fact, if the government had a secret they wanted to keep from the Russians, the best place to leave it wouldn't be in a Pentagon safe, but rather in the contents of the introduction. Why? Because people have allocated only a few minutes to read this piece and, in order not to run over that limit, they'll simply skip this great intro. So why bother writing one! However, since people do pause to look at the title, we have made an effort to come up with a great one, which in this case is..."

Well, at least they know what's up here. The article is standard Nanny stuff. She interviews a man named Sa who runs the Evelyn Wooden Speed Institute. His real name is Salvatore Angelo Kreplach. Everything everywhere is shortened, except the introduction. Nanny kick that guy's ass and let's go on to the Shut-Ups.

I don't even know now. My brain fried itself on the blurbs.

BACK COVER: Great Moments in Sports. A cop hangs some surfers. "Hang Ten!"

The issue is thoroughly average. The blurbs aren't that great. This was a bad idea. Next issue, we go back to the regular style of reviewing. I think everyone will be better off.

Next Issue: Are you kidding? Was this show still on the air?
Posted by Turbot's Finest at 10:18 AM