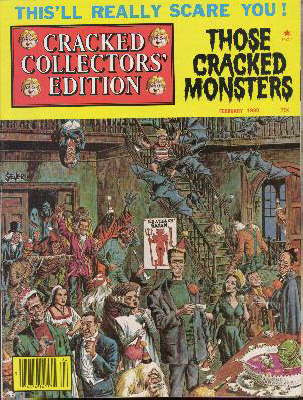 What? A grown man can't be in a monster mood?! C'mon!!! I decided it was time to review a Collectors' Edition. And, I decided that it must be monster-filled. One of my favorite covers. Stare at it, give it a good look. Boy, it's awesome. Look at the detail...You know what? The same drawing is at the center of this issue so we'll go into more exacts there. Suffice it to say, what a great cover! Yes, the UPC code is Pee Yellow as is the very top of the page but the rest of it is Haunted House green, brown & gray.

Note: I know that the majority of the bits in here appeared in previous issues. If I know where they're from, I'll tell you. If not, we'll let it ride. I'm not a historian. I'm a French Canadian Reviewer.

Oh, there is no poster here. The inside covers are ads. We'll skip 'em.

No Table of contents, either. There's a still of a person being strangled by vines and saying something droll. Above this is:

"We've Done It Again!
Huge and hairy...Gigantic and scaly...They lurk in the shadows, awaiting the unsuspecting VICTIM---that's you---and you're going to DIE LAUGHING at...

FFTD: An ad for Fiendish Florist Telephone Delivery. Send two pots of swamp roses in quicksand to a friend. It turns out the Old Witch, Dracula and Frankenstein & his bride all use this service. I'm going to give 'em a call. I just write "HAPPY NEW TOMB" on the card.

STAR PEOPLE WEEKLY & CREATURES & THINGS: From Issue #148. Here's my original write-up. "A tabloid for outer space! Hugh Hefner XII is on the cover with his outer-space Playboy Empire. And, the gals look real odd! Apparently, they just opened the first McDonalds on Uranus. How do the new Polaroids work? Pop the Polaroid Pill in your mouth. Focus on the subject. Tweak your nose. Finished photo pops out of your mouth. It's fun. This is an entertaining article that pops up in one of the SPECIALS in the next year or two. Look for it! Oddly enough, at five pages, this one could have been longer."

I would just add that, technically, sci-fi stuff like this does not actually constitute "Monsters". But, the article is still a good one.

THE MONSTERS LAUGH IT UP: Two pages of Cracked Lens stuff. This is a motif throughout the issue. Robots, giant ants, The Mad Monster and Godzilla vs. King Kong. The last one is Bela Lugosi whipping a hairy man and saying "...no son of mine is going to be a singer with a rock 'n' roll group!" You tell 'em, Bela. He should grow up to be a completely bat-ass bonkers mad scientist like you!

THE NIGHTMARES OF MONSTERS: This one looks familiar but it's not from an issue I've reviewed. Two pages of Dracula and the Wolfman and King Kong and The Sea Creature having nightmares. Dracula's wife tells him that she doesn't want him going out at night anymore. The Sea Creature watches men pollute his swamp. The Mole bursts through the sidewalk and gets hit by a skateboarder. The werewolf is recruited to be in a rock 'n' roll group. Hey! Maybe he's in that group with Bela's son.

BILL WARD'S CHILLER DILLERS: One page of one-panel cartoons that I know I've seen before. Pretty funny bits. A man going into a blood bank is made a better offer by Dracula. On a deserted clifftop road, a monster leans against the rock wall right on a hairpin curve. The center line comes around the curve and goes off the edge of the cliff. Someone is going to have a tough time driving tonight!

THE HOWLS ARE HERE!: CRACKED LENS explosion! Well, another page.

CRACKED PRESENTS: FUTURE INSECT MONSTER MOVIES: I know this one but I think it's from around #116. And, we're not there yet. Forward then back!! "Ever since the great box office success of the insect movie "The Hellstrom Chronicle"... Well, I didn't know what that movie was. I looked it up. It won the Academy Award for Best Documentary back in 1971-ish. Wow! Isn't that fairly highbrow for CRACKED? Regardless... Moth Men, Snail Men, Beetle Men (guess what famous rock group shows up here), Ant Men, Fire Fly Men...they're all here. And it's all pretty fun. The jokes are all day-old but some of the art is excellent. Worth a read. I'll try to find out when this originally appeared. (They mention "The Sting". Why wouldn't they?)

MONSTER LAUGHS: Another page of stills and yuks!!

Sorry to ruin it...but here are the answers.

Some answers that are wrong include:
- The Attack of the 90-Foot Banana
- The Mummy Builds a Bandage Factory
- The Battle of The Wild Walters
- The Blob Sings the Song Hits of Petula Clark
- King Kong's Ding Dong School

MONSTER PARTY: Center spread. Two pages elongation of the cover but with one drawback: word balloons. Oh well. The jokes aren't great but the art sure is wonderful. The Creature from the Black Lagoon in the punch bowl. The Ghouls at the front door. The door off to the right with the crazy lady wearing the party hat. Notice: Behind her, there is another staircase. A staircase that looks like the main staircase. Where does that one go? Think of the crazy architecture. A house with another house attached? What floor is this party on? Is the house built on the side of a mountain?

Recently, I blabbed about how bland covers were getting for the Regular CRACKED issues. The main joke was fine but there's no background. The joy of this Monster Party is that there is so much to see. It's awesome. Look on and then we'll move on.

CHILLING CHUCKLES: Two more pages of photo yuks from the fellas at CRACKED!

THE EVIL EXPERIMENT: An OK one-pager with a wacky scientist and a wacky potion.

THE GREATEST MONSTER BATTLE OF ALL TIME: Out on a blasted plain somewhere, the monsters brawl. I won't go into it myself. I'll let the caption writer take over:

"Here we are - ringside! The bell just sounded and the fight for the heavyweight title of Transylvania is on... The Blue Mess tosses a right claw to the chins of the Sea Glob...Hairy Harry lands a short fang to the pointed ear of the Creature From The Yellow Taxi Cab...Whatta fight, Whatta fight, fans!"

THE BIG THINGS DO THEIR THING!: See above.

THE BIG ONES SCREAM AGAIN!: Three pages of...

GREAT SCENES FROM GREAT HORROR MOVIES: A two-pager parody of Son of Frankenstein.

CRACKED INTERVIEWS THE MONSTER KING: From #143 - "Ahhh, here's King Kong. (He appeared briefly in Rockey, too.) I was hoping he might have fallen from favor. Nope. Just getting sifted around in the magazine. Nanny visits the King in his giant Hollywood home. (I do mean 'giant'.) In the end, Nanny's charm causes King Kong to carry her away. She'll be back. I hope. Not really a hard-hitting interview but it was fun. King Kong has a big house! I must be in a good mood today if I let this constant "Kong Worship" just breeze by here. Oh well..."

MONSTER GREETING CARDS: Good stuff. Drawings of cards that monsters give each other. "A voice in the wilderness calls out...Happy Birthday, Ugly!" "To my Sweetheart, "Baby, I'm really "Ape" over you!" Yes, there is an ape on this one. "Congratulations! You Lucky Stiff!" You can guess that one. There's another great one with a gallows and a crazy man standing under the hangman's noose. He has "noose" for you. Loved it!

BACK COVER: The Stone Age -- A one-pager with smile attached!

Pure fun! Nothing too heavy in here. Sixteen pages of CRACKED LENS monsters make me giggle like a madman. This issue is a breeze. I get great joy from just sitting and flipping through it.