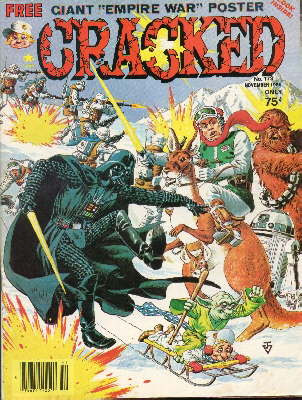 Hey! A background! And one that is really quite wonderful! Do they have to ration the cover backgrounds over at CRACKED? Inflation was that bad in 1980? Regardless, this is one of Severin's best. But, you need to proceed inside to really take it all in.

INSIDE COVER: There it is! The full two-page spread! Just like the Cantina poster from the Star Wars's parody days. This is huge and really wonderful. There's something to see everywhere on this one. The Army of Stormtroopers in the distance. Sylvester's sled trail. C-3PO making snowballs. What a great freakin' poster! This is how they all should be.

TABLE OF CONTENTS: "Miss Reed - prffff rfdrer" And, in the little blurb...a strange joke: "So now everyone knows where you went on vacation, Sylvester...the ice planet! Don't stay outside too long; it looks Colth there!" Huh? I know it's the planet Hoth. But, what does this joke mean? Again, I get the distinct feeling that CRACKED saw what was happening in the pop culture world around them but really had no clue. Remember when they spelled Fonz as "Fonze"? Oh boy.

LETTUCE FROM OUR READERS: There's a letter from a guy praising them on their Six Million Dollar parody. His letter is from March 3, 1970. Ahh... Next issue - September 23rd.

THE EMPIRE STRIKES OUT: Fun art and a nice flow to it. But, my Lord, what's with all the rotten jokes. (They do, like they usually do, mention that their jokes are really, really old. So, why not try to think up some new bits?) Luke mentions his nose is running. The response is "Good! It'll keep your nose in shape!" Sure. Thanks, guys. Yoda cooks something on Luke's stove. Why? "Haven't you ever heard of a gnome on the range?" I'm pretty sure these jokes would have made me wince when I was a child. Now, they're giving me a heart attack. When Boba Fett demands the bounty on Han's head, guess what Darth Vader gives him? (A: A roll of Bounty Paper Towels.) Oh, when Darth says he's going to freeze Han, Han replies with "That's not an ice thing to do." I guess as long as you don't actually read this, it's wonderful.

CRACKED'S NEW SIDEWALK, STREET AND PLAYGROUND GAMES: New games for 1980! "Cowboys & Arabs!" (You can guess your own game here.) "Chicken!" (See how long you can ignore your Mom's cries for you to come home!) Three Mile Island (A water balloon and yells of "Meltdown"!) Let's Be Obnoxious (Bug somebody you don't know and run away from them!) There are several others but those are the ones I felt like writing down. I guess this article is OK. It just kind of sits there and teeters on the edge of big-time laughs. Wouldn't it have been great if it fell into the laughs?

YE HANG UPS: It's a full multi-panel one-pager! Wow! And, it's funny even if it doesn't make a lick of sense! Enjoy!

CRACKED'S UPDATED PUNCHLINES TO SOME OF THE WORLD'S OLDEST JOKES: All right... a few examples should suffice:

What's worse than an elephant on water skis?
Old: A porcupine on a rubber life raft!
New: Just about any episode of The Misadventures of Sheriff Lobo!

Where's one place you can always find money?
Old: In the dictionary!
News: Under an OPEC member's turban!

What is orange and half a mile high?
Old: The Empire State Carrot!
News: The after-glow around Three Mile Island!

(Boy, they're getting a lot of mileage out of Three Mile Island in this issue.)

What tree is always unhappy?
Old: A Blue Spruce.
New: One just cut down to make way for a row of condominiums.

ABSOLUTELY, UNQUESTIONABLY, POSITIVELY, UNDENIABLY, THE VERY, VERY, LAST OF THE CRACKED LENS (and we mean it this time!): Hey, Airport 1975! 5 pages of joy and Marlon Brando. Always a good bit, this bit continues to always be a good bit. So there.

A CRACKED LOOK AT A BIG CITY OFFICE: These things need open spaces. It's two pages but all the chaos and frenzy of people and word balloons leaves me swimming in the jokes about the boss being absent-minded. How do we know? He took his wife out to dinner and told her not to mention it to his secretary! Not a lot of puns in this one. How many people work here? Oh, about half. Jokes like that. And, they fill up the space and some of the people look very amusing but...Who is all this for? Surely the kids who read The Empire Strikes Back parody at the start must be shrugging their shoulders at this. Hell, I am and I'm in an office right now. CRACKED, thou art inscrutable.

HOW THE GOVERNMENT CAN CUT DOWN ON SPENDING: Boy, this one is sure heavy on the political satire. Of course, the 1980 election was a few months away but, again, articles like this really don't match up with the cover or the lead article. Maybe there were a lot of disappointed kids out there after shelling out their cash on this?

In fact, I'm trying to remember how I used to read CRACKED. We didn't have a lot of money. So, we'd go to Wegmans and I'd spend the cash I had on a CRACKED because the cover's were usually so great and then...they'd be filled with articles like this or those "You Know you're Too [Something] When..." that I always disliked. But, I'd spend my money on it so, for God's sake, I was going to read all of it and love it! I guess a comic book worked better but CRACKED was Comedy! That's what it said it was! So why does it all feel so odd? I would have been seven when this issue came out. I started buying CRACKED very soon after this. Why? A lot of sizzle. Where the hell's my stake?

CRACKED FACTS: Some days I start reviewing these and they just make me tired. This is a thoroughly average CRACKED article with wacky Facts! "A large number of exotic carpets that Iran exports are produced from the dead hairs of the Ayatullah's [sic] beard." "Martin Quackery is the first man to be raised by a family of ducks. Today he is a successful down pillow manufacturer but every time he sees a duck he is seized with an uncontrollable desire to go to Disney World." The facts are never that great. They're far too convoluted and there's no kick.

What is wrong with me? CRACKED, have I lost the love?

THE CRACKED WORLD OF VACATIONS: Well, this sure didn't bring the love back. Boy, there is a grotesque pimply-faced teen in this bit. Yuktown, U.S.A. A wife demands her husband ask for more vacation. His boss obliges. The man is fired! BOOM! That was the sound of my trousers exploding from the high hilarity! Another couple goes to Italy and complains the whole time. But, when they get back, they say they love it. Have you heard each of these jokes fourteen times in the past?

A DOZEN THINGS NEVER TO DO AT THE BEACH: Two pages of advice like never offering to put suntan oil on a weightlifter's girlfriend's back. Move on...

IF RONALD REAGAN BECOMES PRESIDENT: He'll always do a re-take! Ha! Well, this is no funnier that the kind of crap Ronnie did for eight years, although it's funny to see what people thought in the Summer of 1980. John Wayne on the dollar. Superman and Miss Piggy on the cabinet. Henry Kissinger does a screen test. Oh, Ronnie! We were laughing for a while, weren't we?

CRACKED INTERVIEWS THE MULTI-CINEMA KING: And, we end with Nanny. Mr. Ray Design is the man who puts together all these big-big multiplexes and, frankly, they're a bit of a ripoff. Small seats, smaller screens, theaters next to loud generators. Bad movies...Oh wait. That's not his fault. I enjoyed this round of Nanny. It was nice to see her. There really isn't anything to laugh out loud at here but it's worth your time.

BACK COVER: "Great Moments in Aviation" A guy selling balloons floats across the Atlantic with a bemused look on his face.

I think the thing that bugged me with this issue was that the cover and the lead article promise Pop Culture goofball fun. But, most of this issue is satire on the state of the union and the upcoming Presidential election. As a kid, I would have been disappointed. As a grown-up, I applaud their attempt but wish they'd stick to Mork and Coleman.

Next Issue: I wonder what this one has inside?
Posted by Turbot's Finest at 11:27 AM