CRACKED #171: This Cover Speaks For Itself 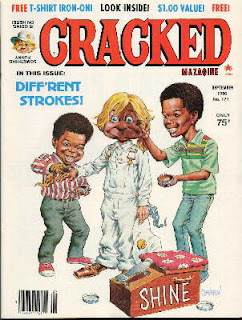 Where'd they get the Shoe Shine box, I wonder? Oh CRACKED, you've done it again! And, once again, I'm not quite sure what you've done. It is nice to know that they know the worth of their own Iron-On's: 1 dollar.

INSIDE FRONT COVER: A Three Mile Island souvenir poster. Hang it on your wall! It glows!

TABLE OF CONTENTS: I am tempted to flip to the inside back cover for my valuable iron-on right now but that's not the way things work. Marcus Absent is this week's...you know.

LETTUCE FROM OUR READERS: Next issue - July 8th. Most people enjoy CRACKED. If they don't, then the editor sends the razz at 'em! It's actually time to renew my subscription. They do offer extra copies of this issue's iron-on for a buck. They weren't kidding! It is a buck! That's good iron-on.

IF ARNOLD WERE TREATED AND BEHAVED LIKE A REAL-LIFE KID: The housekeeper wants to kill him for all his shenanigans. Willis wants to beat Arnold when he is stapled to his bedsheets so he won't slide out of bed. Arnold uses Mr. Drummond's stock certificates to dry his pet goldfish. Arnold is grounded until age 21. A water balloon is dropped on a Mr. Haymarket who sues Mr. Drummond. Oh no...when cuteness does not work anymore, Arnold has a rough time of it. I guess this wouldn't make such a great sitcom. Oddly enough, it's not really a funny article. More of a "of course" kind of thing. Great idea. Strange use of humor.

NEW DETECTORS OF THE FUTURE: Bore detectors. Salesman detectors. Weather detectors. Odd. This one is a real strange sort of funny, too. It's more of a nod your head and say "Sure, sure" kind of thing. There are some interesting illustrations but it's not a "Ha HA!" article. It isn't even written that way. It's just kind of clever as it carries its premise along for three pages. Hmmm...

THE MEDICINE MAN: A three-pager about a medicine man who keeps doing the wrong sort of dance. If this is from before 1973, I'll eat my hat. It's kind of funny but just feels like a strange retread.

THE CRACKED BOOK OF RUNNING: Text-heavy but with some charming drawings. But, not nearly enough drawings. Hmm...I really may need to start looking at my current relationship with CRACKED.

There was a time a few issues ago where I loved it to pieces but now I find myself denigrating it a lot. But, the magazine's just not funny. And, the problem is that they don't really seem like they're trying anymore. Back in the mid 70's, we went through this but the mag revitalized itself. Now, it's backed right into a sort of repetitive style or, in the case of this article, a very word-filled style that just doesn't suit them. Odd. I love CRACKED. But, I do hope there's a change or a spike in quality soon.

ABSOLUTELY, UNDENIABLY, POSITIVELY, UNQUESTIONABLY, THE VERY LAST OF THE CRACKED LENS: This seemed to be the vanguard of fun a few years ago. Now, it's a funny oasis in the midst of all this odd "This is humor?" stuff that they've been doing. Maybe it's "humour" and I just don't recognize it?

ADS FROM THE SPACE AGE: Again, interesting premise. Updating all sorts of ads (going to Vegas, car ads, weight loss) to the far, far future. The copy is fine. The drawings are fine. But, I'm not laughing. In fact, I'm skimmimg along. Have I, possibly, read too much CRACKED lately? Am I immune to its style of comedy? Isn't "Make Big Money Hauling Space Trash" a hoot? I don't know anymore.

NEW IDEAS FOR PHONY "OPTIONAL EQUIPMENT" CAR DEALERS CAN GOUGE THE PUBLIC WITH: We see a cross section of a car and assorted arrows pointing to various bits. An example: "Electronically controlled rain-dispersal arm-assembly (windshield wipers) - $13.95 each. Rubber wiper blades - $6.00 extra per blade". It's a funny concept that is worked out thoroughly, if not very hilariously.

COMPANY MERGERS OF THE FUTURE: This one is pretty good. Perdue Chicken Company and Goodyear Rubber Corporation merge - Rubber eggs! Celeste Pizza and Polaroid Land Camera Corporation - A camera that produces a slice of pizza in 60 seconds. McDonald's and IBM - MBM! They have glasses with pictures of all your favorite execs on them! A Super-fast computer store. What are the odds? Nice bit. This one takes the edge off.

ILLUSTRATED IDIOTIC IDIOMS: Wacky photos of things that refer to something. Number 4 has a woman sitting on some steps with a couple cans of TAB on her head. "Keeping Tabs on Someone." A picture of someone with no face is "Losing Face". Stuff like that. It's the pictures that sell this one. They're pretty goofy. It doesn't seem like the staff of CRACKED did this. Freelance?

KING ARTHUR AND THE KNIGHTS OF THE RESERVED TABLE: One of their "classic" parodies. At King Author's court, there is a crazy dragon. The knight who can kill it gets the King's daugther's hand in marriage. Her name is Princess Scrunge and she's a little gamy. Sir Callow The Timid saves the day by unleashing the Talking Blob from an issue of CRACKED. T.B. wins. The dragon is eaten. Then, the TB eats the King and Sir Callow defeats TB. In the end. Callow and Scrunge rule the land. This bit is fun. Doesn't match the beach party with the Fonz from so long ago but it's worth a few giggles and is a good read.

CRACKED INTERVIEWS THE INFLATION BEATING KING: The most amazing thing about this one is that Nanny has stockings on in the first panel but is bare-legged for the rest of it. Where'd her pantyhose go? The heck? She interviews Mr. M. I. Cheap who reads his neighbor's newspaper. He also bunks under the train early in the morning to get a free ride. He offers people on the street cash for whatever old clothes they're wearing. He puts one article of clothing in each machine at the laundromat. Then, when someone cleans their clothes in it, he comes in and says he forgot to take out an item. So, he gets all his clothes cleaned for free! How on earth could you do anything else with your life if this is all you did? There's nothing to "hard hit" at here. Nanny's talking to the guy to get tips. But, he's just really cheap. Did you get that from his name?

BACK COVER: Some caveman almost invents the frisbee. Oh well... It goes out as it came in. Kind of mmm-hmmm-sure...

Well, I'm having some troubles here. The magazine seemed to be branching out into wonder but it, in fact, settled into a strangely bland place. Here's hoping we can snap out of it soon. But, I don't think we have a Fonz coming up anytime in the future.

Next issue: Well, we've got a team-up going. I sure am hoping it's a good one.

This one brought to you by... 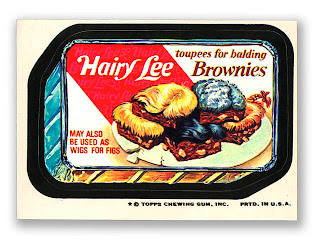