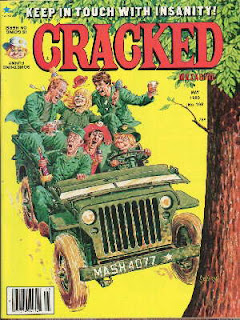 Seriously...what is going on with the yellow? Why aren't there more trees around? Or a background of any kind? Are they riding around on the sun? It's such a great image (pure CRACKED) but there's nothing else to look at. You get "the gag" and nothing else. A little context around it would make it more than just "a joke". A road? Some trees? Maybe a few tents behind them? It's like they suddenly appeared in the middle of a yellow void with one big tree in the center of it. And yes, that is very amusing. But, a richer design on the cover would make the joke stronger, I think. Look at all those MAD covers with Alfred E. doing something in the foreground and all sorts of majesty in the background. When Alfred jokes, he uses the world. CRACKED uses the space right here, right now...and nothing else. C'mon guys, would a little more art on your cover have killed you?

POSTER: Well, this sure is yellow. "TEACHERS STRIKE NO SCHOOL" But, there is some small print. But, that small print is right around the staple and I'm pretty sure the joke isn't worth it. Does the yellow represent the sun?

LETTUCE FROM OUR READERS: Someone mentions how much they love Mork. The editors respond with "If you check your newsstand later this month, you'll find an all-new Special Collectors' starring Mork from Ork." Keep that in mind. It'll be important. Another reader says how much they liked the Christmas Card article - "After everyone had read it, I chucked it into the fireplace." Possibly the best gag in the issue. "Next issue - March 11th."

M*U*S*H: It's nice to see them back. The plotline here? A strange sickness is overtaking the soldiers. How is it cured? Hawkeye realizes that the sickness is real and so all the fake medicine that the props department sends over has no effect. So, they get in real medicine and everyone is cured. Not bad. But, there is a better bit. The characters keep seeing actors who have left the show. Trappedinthejohn, M.D. and Frank and Radar and Henry Flake. It's a nice sort of reminder of all the folks the show has lost as it went along but the explanation is better...Reception has been bad. They've been picking up transmissions of old shows from other networks. Their own reruns are interfering with this new episode. Nice...

Now, having said that, one Nome, Alaska joke per issue is enough for me. They make about four of them here and then mention that they've made a lot of Nome, Alaska jokes. The cornball meter is at an all-time high here. It's like they got one person to plot it and Forrest Ackerman to dialog it. It doesn't ruin anything but it gets a little ruff...sorry, rough. Sonofabitch!

HOW THE ADS OF TOMORROW WILL EXPLOIT THE ENERGY CRISIS: There's that Off-Off switch again. Three layer suits for cold offices. An old highway for sale. Strange...I'm looking at the article and it's not doing anything for me. They put effort into it but it never seems to take off. It's three pages, which is, maybe, too short. Possibly they should have gone longer or gone with something else. This one does nothing for me.

HOW MADISON AVENUE CAN TURN ANYTHING INTO A GREAT SELLING GIFT: Selling chainsaws to housewives. It's an accessory. You can wear it around your neck. You can cut meat. You can do so many things. This three-pager is better than the previous one. It has more energy and verve but it still never quite takes off. I got a page into it and thought "I hope this doesn't go on too long." and it didn't. But still... The third page has them selling sandpaper for parties and that's a little livelier but... Darnit! I just don't get much from this article or the previous one. They seem like first drafts that were not quite finished. Ahhh...

ABSOLUTELY, POSITIVELY THE VERY LAST OF THOSE CRACKED MONSTERS: The Cracked Lens with Monsters! And, it's funny! But, it's only three pages. Why not five? Again, this bit starts, becomes great fun and then ends. It's rare for CRACKED to leave us actually wanting more. When they do it, I'm not sure how to react. Great stills, though.

THE CRACKED GUIDE TO ICE SKATING: This one feels like an old one. It's the layout. It looks like 60's CRACKED to me. Regardless, it's a fun read. With a lot of those jokes where the caption says one thing and the picture is some sort of gaggery..."Now let us examine the blade..." We see a drawing of a razor blade. "Not that kind of blade, idiot!" It's just the right length at four pages although it's never really that funny. A few great drawings and some semi-clever wordplay make it worth a read but...

I'll be honest...The failures of the Advertising articles were more interesting than this one. A "Cracked Guide" is pure safety for CRACKED. They do this kind of thing in their sleep. As I said last time, I'd rather see them drop trying something new than drag the old stuff deeper into the ground.

A CRACKED LOOK AT A HEALTH SPA: Oh no! Not one of these! Chaotic drawings, too many word balloons and no funny jokes to be found! Why, why, why?! Don't tell me this bit is back? Sorry. Let's move on.

SAVE OUR AMERICAN BILLIONAIRE: Funny one-pager. It's placed by an oil company trying to save the vanishing American billionaire. Good stuff. Seems to belong in a different magazine.

IF SCHOOLS PATTERNED THEMSELVES AFTER TV: Pretty good article. History class becomes a quiz show. Kids dance during Music class. A student goes into the nurse's office with a skinned knee. A nurse puts Brand X medicine on one knee and "Hurts Like The Dickens" on the unskinned knee. Brand X does nothing. "Hurts Like..." burns through the flesh. Comedy! The punnery is at a minimum (for CRACKED) here and the whole thing flows along nicely. I don't love this article but it's fresh and it's more thought out than earlier bits.

There's that Cracked Reporter again. What does he do exactly?

HOW TO MAKE MONEY IN YOUR SPARE TIME: The basic premise is sound: Make extra cash by -- being pleasant to another man's wife over breakfast. Get hired by a rich kid to beat people up. Catch foul balls at the ballpark and sell them. Things like that. The premise is sound but (maybe I'm sick) the actual article doesn't pin me down. It kind of floats vaguely around and then it's over. Stronger art? Better jokes? I don't know. I keep reading.

MOVIE POSTERS WE'LL SOON BE SEEING: They take pictures and movie stills and write-up little gag-filled bits around them. "Doctor Dolittle" is about a really bad doctor. "Who'll stop the Rain" is about a family in a flooded apartment. "High Planes Drifter"...well, maybe you can guess that one. There are six pages of these things. They're fun at first but when I flipped to pages 5 & 6 I thought "There's more?" Some articles are far too short. This one seems like filler.

CRACKED INTERVIEWS THE ORKAN KING: Nanny interviews Mork who makes a lot of corny jokes and flusters Nanny now and then. This bit's OK but confusing...Remember the letter about Mork from earlier? The mention of the "all-new Special Collectors' starring Mork from Ork"? Well, Nanny starts off this bit saying "As we come to the end of this special issue, boy do we have a treat in store for you...we've finally located Mork, and he's consented to meet and talk with me exclusively for this edition." What is Nanny talking about? I've never read this "all-new Special Collectors' starring Mork from Ork" but doesn't this dialog imply that this article was meant for that? Is this article in that "all-new Special Collectors' starring Mork from Ork" along with this regular issue? Now, I want to read it and find out.

Strange issue. A few articles were overwritten. While others felt unfinished. I feel like we're on the verge of another CRACKED Golden Age but for some reason we're not quite getting there. Hold on...We'll see what they do next.

NEXT ISSUE: Oh yes! Everyone's other favorite sci-fi franchise is back! (Although, frankly, I'm not a fan.)
Posted by Turbot's Finest at 9:34 AM