CRACKED #174 : And the background vanishes again 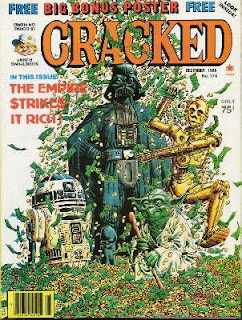 The cover certainly nails it. The Empire Strikes back made over $200 million in 1980. The closest films were 9 to 5 and Stir Crazy in the 104 million range. Well done, Darth and friends! It's a fun cover that, like the last one, is worth a good long look. But, I wonder why the background had to vanish. I wonder if they were standing in front of something great?

"This room has been affected by the Energy Crisis!...I don't have the energy to Clean it!!" Hey pal, in this heat, we're in the same boat. The poster has yellow lettering with a black background. Hmmm... Or is it a yellow backround with a black foreground that has letters cut out of it?

TABLE OF CONTENTS: Shut-Ups "Ah shut-up and read 'em!" Nice. Oh boy, the Cracked Lens title looks mighty lengthy. Why are the articles all out of order in the table of contents? It's not a very helpful table of contents then, is it? "Amy Stake - rder pruf"

LETTUCE FROM OUR READERS: "Dear CRACKED, Would you settle an argument my brother and I are having? Which is older -- the Kremlin in Moscow or the jokes used in CRACKED LOOKS AT A BIG CITY OFFICE?" Way to razz 'em, Mitchell & Larry Ritzman." Can I get an Amen?! Next issue - November 4th.

EXPLOITING THE STAR WARS FIGURES TO THEIR FULLEST: Darth Vader and Princess Leia in Gone With the Wind II. It doesn't actually seem to be a parody of Gone With The Wind but it's fun. "Chewbacca as the Godfather". He's pretty funny with his big, hairy face and the fat cheeks. Fun... OB1 Designer Jeans - "...if you find yourself having a rough time getting into them, just use THE FORCE. Luke Skywalker Lima Beans and "Odor De Tawntawn Perfume" and on and on... Yes, they will also be on TV. (Although, I'm pretty sure they did the "Star Wars folks on other shows" bit already.) Darth Vader uses his "choke you" power to convince a lady to pick his product in a taste test. Chewbacca advertises razors. Obi-Wan works for Lou Grant. It's a charming article that, in pure CRACKED fashion, never quite seems to connect with anything. It's a pleasant 6 pages to kickstart the issue. But, honestly, they seem to be out of things to say about the Star Wars folks. The verve from '77 is not here.

A CRACKED LOOK AT DUMB INVESTMENTS: Opening a "soul food" restaurant in Beverly Hills. Classy! It's all mistimed or inappropriate or just plain dumb products that people invest in. I've started this article twice and skimmed over it both times. There is one funny bit: "Investing in a Broadway musical doomed from the start." "The life story of President Millard Filmore set to music!" Two chorus gals dance on stage singing "Hello Millard!" That's funny. But, the rest of it... "Investing in any Farrah Fawcett Movie" with the movie in question being "Kiss Me, Kill me, Pummel Me!" must have been hilarious then...now, not so much. Why do they hate Farrah so much? The rest of it is stuff like "issuing tricentennial merchandise" and buying real estate around 3 Mile Island. The art is fun. The jokes aren't bad. They just never take off. I hope this isn't a theme for the issue.

ABSOLUTELY, UNQUESTIONABLY, POSITIVELY, UNDENIABLY, THE VERY, VERY LAST OF THE CRACKED LENS (and we really mean it this time!): There's a still from Deranged. Gosh, these are fun. Whoever came up with this bit deserves a CRACKED Award for Awesome.

THE CRACKED QUESTIONS AND ANSWERS GUIDE TO RACQUETBALL: Some funny bits. A few of the "You'll need a ball to play" kind of jokes and you see a man standing in front of a formal ball complaining how expensive this sport is. But, even for gags like that, the drawings are pretty funny. "Players then alternate striking the ball." Yep, there are strikers. But, they're pretty funny looking. The cross-section drawing of the racquetball court is just a pinch better than these things normally are. And, for this being a text heavy article, the text is large and the people always fun looking. I mentioned that before but you've no idea how great it is to just have some very funny things to look at. I thought I'd dislike this but I really enjoyed it.

HOW TO WIN A SCHOOL ELECTION: Ahhh. Lance Excelent [sic] shows us how to bribe who we need to bribe to win. How to tell Lies and be as vague as you need to be to win. In the end, it's a parody on real elections and it's OK. One of those articles that I can't really grasp the point of except for the fact that this would have been right before the 1980 election. There's a good gag at the end that I won't ruin for you. It may be the best part of it.

FUTURE ULTRA REALISTIC ELECTRONIC GAMES: The future! Red Dog Football! Blood spurts out of a hole after tackles. Authentic locker room smells. Cheerleaders with 24 different cheers. It's great! Long Shot! "Now you can simulate the thrill of blowing a wad at the races in your own home...Set comes with a paper shredder that shreds the contents of your wallet!" There's a baseball game, racing game, VEGAS! and a basketball game. They all are like the real things! More or less. I like the layout and look of this one, although the jokes are hit and miss.

CRACKED'S LITTLE KNOWN BY-LAWS: I really needed a breezy visual piece here. This one has too much text and drawings that are funny but ehh... "Law #4: In Boston, Massachusetts, you are not allowed to place an oral thermometer in boiling water." "Law #9: In the Soviet Union, you can get arrested for saying 'More onions on the pizza, please.'" "Law #12: In Pittsburgh, Pennsylvania, it is against the law to tie an alligator to a fire-hydrant." At two pages, it doesn't wear itself out.

MASTERS OF EVIL: Three pages of monster themed CRACKED LENS gaggery. Some good stills including one from Harold Lloyd's film Why Worry. I see Count Yorga, Trog, The Mad Monster, Young Frankenstein and Frankenstein Meets the Wolfman. Why'd they put Deranged in the regular CRACKED LENS? That's the most horrific here. Regardless, laughs!

YOU WON'T BE INVITED TO ANOTHER PARTY WHEN AT YOUR LAST PARTY...: Oh boy, gags away! These are some oldies and some CRACKIES!

"...you unwittingly poured cement mix in the cheese dip."
"...you told your friends there were going to be door prizes and you gave away 5 doors."
"...you came dressed as a zebra and it wasn't a costume party."
"...you tried to offset the money you spend on the gift by stuffing your pockets with food."

REAL INCREDIBLE PEOPLE: "Checking out the T.V. ratings the other day, we noticed an interesting fact. Audiences are starting to ignore dumb situation comedies and detective dramas and are instead turning to informational programming. Well, at first, these shows were of high quality like 60 Minutes and 20-20, however, this past spring they've been getting dumber and dumber. In fact, the most moronic of all will probably be the new one they plan to introduce in a couple of weeks entitles...REAL INCREDIBLE PEOPLE" They got a little verbose in this into. This new show will look at tap dancing trout, a man who trains dogs to take their masters out for a walk and a lady barber who cuts client's hair with her teeth. Looks great to me. Sahara Prucell, Jolly Davison and Chairo are the hosts. There first story is with Burny Mihand, the Human Torch. He's a guy who is constantly burning! Then, Otto and Jock Doubleday, Siamese twins. One's fat and one's thin. Then, some other stuff happens and eventually the article peters out. Starts strong (I remember these shows. I was a regular viewer.) and then fades. It goes on one story too long.

"Help Sylvester Fight..." Sure, I know. Six dollars for 9 issues.

CRACKED'S CAREER GUIDE FOR DISC JOCKEYS: "Besides breathing polluted air, eating food which has been sprayed with pesticides, and making fun of uncoordinated people, there is one other thing we Americans have in common and that's...listening to the radio. And because of this, radio has become a big business. Everyday, more and more high paying jobs open up in the broadcasting field. And, because we care about your future, we're now going to tell you how YOU can take advantage of these opportunities as we present..." Sometime soon I am going to do a review that has the introductory blurb for each article written out. We'll check for any connections between longer blurbs and the quality of the articles. This article, by the way...is all right. The best joke is when they remind us that a disc jokey is a broadcaster. You see a man casting off from the shore. Instead of bait, he's casting a large-breasted woman. A broad caster! Get it! Ahhh... A lot of jokes like this. Turns out the Frankenstein's Monster isn't a good disc jockey because he mumbles too much. There's a comedy aptitude test and an application and, this is odd...it's the end of the issue.

BACK COVER: The Man and The Beast. A decent one-pager to close of the issue.

I like this issue. It has very little of the stuff that bugs me about CRACKED and much of the stuff I like. And, I love the fact that there isn't a single straightforward TV or Movie parody here, unless you count Real incredible People but that feels different. This is a fun issue. Let's get back on track, guys. I'm enjoying this.

Next issue: One of the very first ones I remember reading.
Posted by Turbot's Finest at 11:42 AM