CRACKED #172: A TV Crossover in the Void 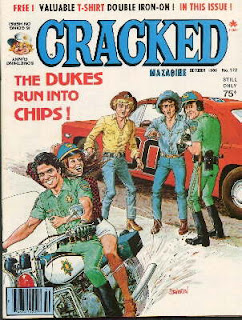 Great cover...well, great subject for the cover. Where's the background? The people look great. The motorcycle and the General Lee looks great. The car is on a dirt road that fades away. The motorcycle is on...? Who knows? Are they in Hazzard County or the big city? Are they deep in the Void near Antares 13 in the Madeline Cluster? Where are they? Why is there no background? CRACKED!! Oh well, let's head in.

INSIDE FRONT COVER: A playbill for the "1st Annual Gala Jamboree Extravaganza" It looks like a great time. Lots of food. Live music (Bee Gees, Elton John and Kiss) and celebrities (Mohammad Ali, Belushi, Coleman, Parton, Winkler, etc.) Jimmy Carter will be there. But...there's a slip! Oh no! At the very bottom!

TABLE OF CONTENTS: "Rita Righta - pruf rita" "What's Up Front - Our Cover" I see Jimmy Carter and a man at "Veronica Lake" up in the mountains and gangsters and fisherman and the word "BEEP!!" Bodes well.

LETTUCE FROM OUR READERS: Still selling that Cracked Reporter T-Shirt. $4.95 plus 1 dollar S&H. And with CRACKED you can be assured...that's good handling! "Next issue - August 12th" People seemed to have really enjoyed the last few issues. I wonder if there's an "Anti-Lettuce" somewhere that's filled with "troll-style" letters like "CRACKED stink! MAD yes!" and stuff like that.

THE DORKS OF HAZZARDOUS WITH CHIPS TO GO: Boo & Cuke Dork go to Los Angeles for a hamburger. They drive past a smiling man whose T-shirt says "GONZAGA". Thanks, T-shirt! Punch and Yawn, the CHIPS cops, join the Dork boys in the General Flee and capture crooks. Along the way, it is clear that Dork-style law involves a lot of violence and crashes. Those cut-ups! During all of their driving around, Boo and Punch argue about which of them is better looking and who has more dates. In the end, it's inconclusive. I enjoy CRACKED's version of Los Angeles. At one point, there is an 8-lane road, which might be a freeway or not...But, regardless, there are stores along the road. I mean directly on the edge of the road. The doors open directly onto the road. Huh? What land is this? CRACKED? Have any of you ever been to Los Angeles? Unless it's a joke? But, what's the joke? Oh well...C-3PO and R2D2 show up and hijack an oil truck. I almost forgot that.

Great article. One of my favorite satires that they've done. It has a constant sense of movement. The jokes have enough life to them so when the article actually ended I wanted more. Nice beginnings.

ABSOLUTELY, UNQUESTIONABLY, POSITIVELY, UNDENIABLY, THE VERY, VERY, LAST OF THE CRACKED LENS: 5 pages of funny. These article's are just getting better and better. One of my favorites: Calvary guys are hunched over the body of a dead Indian. One says "Remember corporal, 'The only good Indian is a dead Indian.'" The corporal replies with "I know that Sarge. Why, some of my best friends are dead Indians." Politically incorrect? Sure. More clever that the average CRACKED gag? You bet your ass, Franklin!

IF WOMEN REALLY WANTED TO BE TREATED EQUALLY: Remember how I said I wished Chips and the Dukes went on longer, well, here's one I wish was shorter. This article is about women doing all sorts of the "miserable" things that men have to do. "...Let them go for the car next time you come out of a movie and it's pouring rain!" "...Let them see how they like the 'mandatory jacket and tie rule' in scorching 98 degrees restaurants!" "...Let them move the living room furniture while the men decide where it looks best!" It goes on for two pages. There is an occasionally funny drawing but let's move on...

CRACKED FANTASIES: A man's head is in the center of the pages (Corkmonger, Walter Corkmonger) and all sorts of little thought balloons emanate from his mind. Winning Mr. America. Being allowed to marry Bo Derek. No bad weather while on vacation at Veronica Lake. Stuff like that. But, it all feels rather low-key. Nothing is ever that funny or that exciting. Maybe Corkmonger's just pitching low but it's your fantasy, man! Go crazier. This is like my 96-year-old Grampa's version of a CRACKED article. "I didn't want you to laugh too hard, Pierre. You might pull a hammer. (hamstring)"

YOU'RE NOT GOING TO GET ANYWHERE WITH HIM / HER IF: Are all these articles becoming the same? One page of guys and gals saying rude things to their dates. I forgot this was here when I scanned this article for the review. That's how memorable it is.

WHAT YOU'RE REALLY THINKING: Apparently, I'm not thinking anything that witty. I'm really just kind of an angry jerk. It does end with the writer of the article running into Mr. Sproul's office with the idea for this article. CRACKED!!

CRACKED VISITS THE OL' FISHING CREEK: I wonder how they do these. Does the artist draw them and give them to the writers who stick in all the jokes? Because, unlike the covers, there is always something going on in the drawing. In fact, I love the drawing in this one and that led me to realize why these bits bug me. A lot of times, especially when Don Orehek draws them, the actual layout is really entertaining. There's so much going on. You can scan this one and see so much. Charlie the Tuna fishing. "Warning: Slow Sand" Up in the top right hand corner, near the two old men standing in the water in bathing suits and fancy hats, the fishing creek seems to wind off into the distance. Hey! There's a tugboat way, way back there. No joke around it, although it is pulling a water skier . There's the Loch Ness Monster! "Danger: Thin Ice" So much fun stuff. Why is that old guy sitting in the water up to his neck? Surely not to deliver the rotten joke that he seems to be delivering? Up to the left..."How did you come to fall in the water?" "I didn't come to fall in the water, I came to fish!" I hope no one got paid for that. Ignore the word balloons, enjoy the richness of the Ol' Fishing Creek.

CRACKED'S ALL-PURPOSE TIME-SAVING "DENIAL OF CHARGES" SPEECH FOR POLITICIANS: Two pages of "I wish to speak to you..." And then, there are several different endings to that sentence, ranging from respectful to wacky. This is possibly the most boring article I've ever encountered in CRACKED. I just cannot focus my attention. It's impossible. Sorry. Move on.

THE CRACKED PENAL CODE: Tow pages of people punished for annoying other people. Getting up for popcorn in the middle of a movie sentences you to being thrown in a vat of hot, melted butter. It's like that. A lot of very similar articles in here this month. Oh well, at least it's only two pages long. The last panel is another reference to CRACKED and rotten articles. Hmmm... Oh, one of the punishments is mandatory viewing of a 36-hour Farrah Fawcett film festival.

WHAT "HELP WANTED" ADS SAY AND WHAT THEY REALLY MEAN: You know the drill. "Want a job with punch? Learn the ropes with a challenging position." Boxer. "Move up fast in dynamic Wall St. job." Elevator operator. The final panel is another CRACKED rib at themselves. We're getting a trifle too samey with these things.

LOSER - THE MAGAZINE FOR DEADBEATS: "Exclusive: 16 pages of blank paper. (The material got lost on the way to the printer.)" Yes, fat people, old people and ugly people...they're all losers! Actually, this bit is pretty funny. A bit heavy on the text at times but with some smiles. There is a great Severin drawing of a man walking down a dark road...towards a manhole...about to step on a banana peel...with a mad dog right behind him...with a flower pot dropping out of the sky...with a thug around the corner. That's awesome. The table of contents has a series of drawings, mainly illustrating articles listed. One is an open door, an overturned chair and legs swinging. The heck? CRACKED!!! "The time I was punched in the mouth by a member of the Humanist Society." Loser Quiz...Loser Advice Column...The Inquiring Loser...Ads for Snake-eye dice and a Real piece of Poison Ivy. The best bit? I think it's a big arrow pointing at a dull guy's face. "CONTEST - Find a name for this loser (So we can tell him to get lost during the hurricane season)" Pretty good bit.

Ad for Cracked fighting Inflation is next. And, it's Sylvester in the ring with the big monster named "Inflation".

JIMMY CARTER'S TELETHON FOR ENERGY: Nanny shows up at one point to denigrate Dolly Parton's figure but, apart from that, this is a brand new way to end an issue. Jimmy wants to raise a billion gallons of energy! In the end, he gets about 8 gallons. But, Kenny Rogers and Dolly Parton show up. Very, very topical CRACKED article. Yes, these issues are still issues today but this article is very specific to the issues of the Summer of 1980. So, even though the article is fun to look at and a breeze to read...it's never really funny, today. However, the fact that they ended an issue like this is, frankly, awesome. CRACKED!!

INSIDE BACK COVER: An iron-on. Sadly, their weakest yet. Two arrows: "See front of T-Shirt" "See Back of T-shirt" Let's see the back of the issue, shall we?

GREAT MOMENTS IN TECHNOLOGY: A wristwatch with a sundial! That's a heavy wristwatch!

Good issue. The highs are high and the lows are just average. A fun read that made me giggle a bit. Thank Goodness. To be honest, I was starting to lose my faith in CRACKED. But, of course, one issue does not a winning streak make. Let's check out the next issue before we start crappin' 'em out of excitement. Shall we?

Next issue: They struck back! And, it hurt my hinder!
Posted by Turbot's Finest at 8:37 AM