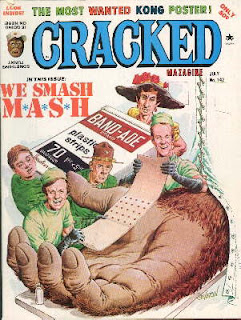 The cover is actually pretty clever. You just have to look at it a bit. But, there's Kong's arm and there's Kong's face (complete with CRACKED hat!). I have no idea whether Kong will appear again on the next issue. Possibly? Who knows? I wish they'd give over to someone new or hand it back to the sweet, sweet Fonz.

The poster is a big WANTED poster for King Kong and, here's the thing: He's big. Real big. Still. The whole thing is covered with one large fingerprint. Actually, a fine poster.

TABLE OF CONTENTS: The proof reader is still doing well. Although, I've noticed that he's not a great speller.

LETTUCE FROM OUR READERS: Here we go! One of the readers got it. "Dear CRACKED, What's all the fuss about King Kong? If he wasn't so big no one would pay any attention to him. -"Shorty" Lefkowitz. Brooklyn, NY." Bravo, "Shorty". Next issue - May 3rd.

M.U.S.H.: The second appearance of a M*A*S*H parody in CRACKED. (1st - #115, March 1974) I haven't read the first one but this one is just fine. The plot: Eagleye has his arms run over by Franc who is driving a tank through the mess hall. Eagleye spends the entire time crackin' wise with casts on his arms. Col. Potted is seen in bed with his horse. Sonar runs around with a pair of teeth yelling "Choppers! Choppers!" When Eageleye's casts are removed, he waves his arms around and says, "You can't be in the army without your little armies!" Brilliant. Ahhh...I could use four or five more M*A*S*H parodies. Great opening.

THE CRACKED GUIDE TO FRIZBEE: Pretty darn funny. I think the hobby parodies are generally much funnier than the sports parodies. This one has a narrator with some sass and some great illustrations, including folks playing frizbee while standing on the wings of WWI planes in flight. And, the final panel has a cameo from...The Incredible Hulk! This is a good one.

WHAT BUSINESSES CAN DO WITH LEFTOVER ITEMS: The idea here is blah but it's all in the incidentals. They discuss what to do with old, unsold LPs. And, the titles of the albums are: "Barry Goldwater Sings Russian Love Songs", "Dorothy Hamill Skates", "Beloved Opera Selections as performed by Andy Williams and Kiss" and "Hum Along With Rosemary Woods". At two pages, this one shows up, makes you smile and then goes.

So far, so great!

REDOING THE EVENING NEWS: Barbara Walters joins ABC news and CBS Evening News with Walter Cronkite drops in the ratings. This article is about all the goofballery that they will engage in to keep ratings, including car chases and anchors dressing as women. Eventually, the best anchor duo ever arrives - Arthur Fonzerelli & Vinnie Barbarino! Best joke: Barbarino - "Tell me, Fonz. What's the latest in China?" Fonz - "I think it's matching cups and plates!" The Fonz laughs uproariously at his own joke. Oh man, this issue is wockin'! I wish #141 never existed.

YOU KNOW YOU'RE THE BIGGEST THING AROUND IF: Either the zenith or nadir of the "That King Kong sure is big" articles. It all depends on whether you're sick to death of him or not. Check the addendum. I'll help you decide. Keep in mind when you peruse the text that the illustrations are quite funny.

ONE DAY AT A WASHINGTON D.C. SCHOOL: A one-pager about Amy Carter in school. I didn't laugh. Am I hard-hearted?

A CRACKED LOOK AT AN AMUSEMENT AREA: Ignore the jokes on this one and look at the games. There's air hockey and that bowling game where you sent a silver disc down a mini-alley and it hit little metal things coming out of the alley under the pins. Then, the pins would go right up. Awesome! We used to have one of those! Great game! There's a game called Judge and Jury with a man behind bars inside it. And, there's a Safari Hunt game with a real gorilla inside it. I'd love to see this without all the word balloons getting in the way.

First half of the issue: 4 Stars out of 5! Cooking! This is great CRACKED.

THE CRACKED BOOKSTORE: "Fonz For President" still for sale. Why not put him on the cover more often then?

ONE DAY AT A RAILROAD CROSSING: One pager. It's all right. We're easing into the second half of the issue.

HOW TO RUN YOUR HOME USING NO ELECTRICAL POWER: Going from room to room of a modern house to show how generators and dog's tails and stationary bicycles and such can lead us towards a happier life without the dependency on electrical power. This one's a bit too verbose for the funny pictures. You find yourself looking at the pictures and ignoring the text. But, there are smiles here and it's a decent article.

THE CRACKED GUIDE TO BASKETBALL: The picture that matches the caption "...and technical fouls like unsportsmanlike conduct" is one my favorites in all of CRACKED. Funny! The rest of the article? Well...two guides in one issue? Didn't we just do this a couple of issues ago? Luckily, this one is OK. But, I find myself reading it quickly so I can see what is next. That's not so great.

ONE DATE AT A TIME: Well, it stank when it was on the air. It stinks now. Why wouldn't the parody be great? I can't answer that. As with the previous article, I found myself reading this one very fast. There are a couple of good jokes but it doesn't feel inspired like the M*A*S*H parody, which is too bad. It is not, however, annoying. Just not great.

LATE ONE EVENING: Decent one pager. A cat meowing and a guy throwing shoes at it.

CRACKED INTERVIEWS THE FAD KING: Way to go, Nanny! This Fad King sells junk! His "melted snowman" is a beaker full of water. The Pet Rock Food is a scam! A turtleneck sweater for a snake plant? Now, that I'll buy! Nice.

Total: 100% Shut UP! This is one of my favorites. Perfect capper for a very good issue.

"Og (Fingers) Oogala Invents Fishing" in this issue's back cover "Great Moments in History" and it's mildly amusing. He is a caveman, after all. (See my "Comedy Rules #327)

A very good issue. The second half lets the side down a bit but you can't have everything. There's enough brio in the first half to keep us flying along. I'm only hoping that Kong will wave good-bye for the next issue and that we can move into new territories. We'll see.