In With The Kong, Out With The Fonz 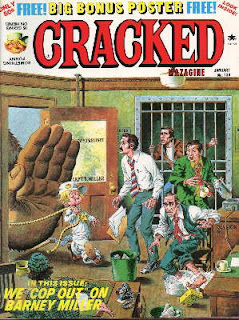 I didn't think the last issue, as you know, was as wonderful as the batch before it. Would this one lift up the end again and show the beautiful CRACKED fanny we adore or would it sag around and be average? (Remembering that "Average CRACKED" is better than "Above Average MAD".)

Well, the cover seems to have it all. Keeping up the "as many pop culture characters as we can" groove, we have King Kong's hand, Barney Miller and The Fonz. It's nice. But, wouldn't The Fonz just bust out of their and punch that big ape on his Nerd Nose? He looks a little too shocked for my tastes.

The Poster: "Warning! The World will end at 5:26 PM!" The fine print says something about being here tomorrow if it doesn't happen today. Well, they can't all be good. I don't understand why so many of these have yellow backgrounds? Isn't that garish?

TABLE OF CONTENTS - "King Kong arrested for jaywalking? Looks like Sylvester's made the biggest 'pinch' in history! But where are Barney and his crew going to put him? Not in with the Fonz, we hope! That wouldn't be 'cool'!" I like the way cool is in quotes. Their satire can be as sharp as a razor. They are cool because they act like grampas. They are writing this magazine. They don't understand the pop culture they're writing about. But, they know that The Fonz is really popular and he is "cool". They have no idea what they means. But, it's a buzzword so they have to include it. Even if you end up seeming like a grampa trying to be hip. Oh, the sharp charm of their immaculate wit. CRACKED! This is why I love you! It's like spelling "The Fonz" with an "e" back in #134, Brilliant.

LETTUCE FROM OUR READERS: It is confirmed! The proof reader has been returned and the kidnappers have claimed the ransom. I wonder what ended up happening with that. Next issue goes on sale - December 21st.

BLARNEY MILLER: Never really liked the show. It had one of those theme songs like "Taxi" or "Cheers" that seemed to dare you to sit through it. But, CRACKED does a funny job here. The city is taking away all their money so they have to keep zoo animals and make sandwiches for people and stuff like that. It's fun. The TV satires are always much better than the movie satires because their imaginations have more places to go. I like all the random appearances by cops and such throughout. They just appear in the foreground or background looking at us and saying something witty. I think seeing Kojak was nice. But, when did The Godfather start dressing like The Fonz? It's strange seeing the old Marlon Brando godfather in a leather jacket looking slim and with slicked back hair. (Fonzerella was a fairy tale so it doesn't count.) Where'd they get that from?

EVOLUTION REVOLUTION: This article shows the way different species, including man, will evolve due to pollution and overpopulation and such. Deer will evolve to look like hunters. Fish will develop feet and the ability to eat garbage. Page three describes the futuristic human and he ain't pretty. I, for one, don't think I would like to develop a protective shell to protect myself from muggers. Would you? An interesting 3-page article with some clever gags. Satire of the world's troubles right after a Barney Miller parody! Is there anything they can't do? (Oh, one panel shows a man watching a commercial on TV. The product looks like a box of detergent. It says "Now!...NERD" on the box.)

THE MEN BEHIND KONG - The first King Kong article. The 1976 remake came out on December 17, 1976. This issue was released in October 1976, I think. The hype was, indeed, huge. This article covers all the folks who take care of Kong from the guys who apply his deodorant to his mouthwash team to the guys who feed him. It's Kong's big face or body in every panel and little guys doing something to it. Each panel also has an extra gag, free of charge. For example, "Kong's Prop Department" is polishing a huge pair of glasses.
"What makes you think the Kong needs prescription glasses?" "The other day he made a pass at The Statue of Liberty!" Fun.

"GOING OUT" SIMULATION KITS - I like this one. For folks who like to stay at home but want to experience going out, they can buy kits that make them feel like they are at the movies or at a restaurant or at a hockey game or at an art museum or on an airplane or at a rock concert or in the CRACKED Offices. This one (much like the Evolution Revolution) is a softer and more charming version of the sort of thing MAD does. Each kit is exactly what you'd imagine. The restaurant comes with a fake rude waiter. The rock concert puts you in the center of a group of smelly cardboard cut-out people. It's great. This one you need to see to really appreciate.

COWTOWN GAZETTE: Probably my favorite thing in here. It is four pages of the local newspaper from one of the smallest towns in the U.S. See the addendum for some article samples. This feels like a non-naughty version of something from the National Lampoon. Dense and very funny.

A CRACKED LOOK AT AN UNEMPLOYMENT OFFICE: They can't all be hits, folks. Crowded and unfunny. Although, the Frankenstein Monster is in the upper left hand corner. That's pretty cool.

WHEN TODAY WILL SEEM LIKE THE GOOD OLD DAYS 20 YEARS FROM NOW: Good God, let's keep those titles under control. It's what you'd expect. The left panel is the beef with today and the right panel is how it will be worse in 1996. Today: Telemarketers bother you. Twenty years: They bother you but you have to see them with video phones. Things like that. Problems with baseball games, smokers, fishing and so on. Today: Commercials get in the way of TV shows. 20 Years: No commercials! It's all Pay TV! This one's OK. I think it sort of feels too similar to Evolution Revolution. However, it's not bad. A quick read.

CRACKED LOOKS AT THE WORLD OF SUPERDOM: Is CRACKED trying to be exactly like MAD in this issue or are they parodying it? A series of one to several panel comic strips showing superheroes getting into shenanigans. Batman beats up a man attacking Robin who turns out to be a Truant Officer. Super Guy is seen demolishing a building. He gets picketed by the unions because he's a scab. Super Guy kicks a man in the butt. The man turns out to to be The Fonz. Fun. Another quick read. You'll forget it when you get two pages on. Well, you might not forget Super Dude. He looks like Bootsy Collins.

The CHECK-UP: One page gag. Fly by it.

THE WIDER WORLD OF SPORTS: A good one. It completely captures how rotten that show was. "Tonight, we have skiing from here! Horse racing from here! Boxing from here! And, everything!" Then, they jump from sport to sport, showing the highlights and nothing else. No suspense, no excitement. It was like flipping through radio stations. Well done, CRACKED! You nailed it! Oh, by the way, does anyone else remember this show?

BEHIND CLOSED DOORS: Two pages of doors with corresponding "behind them" jokes. For example, the door to the Philadelphia Zoo. Behind it, we see men climbing into animal suits. It goes like that. More MAD-like flavors. Somewhere in this issue it became very MAD-esque and a very quick read. We're speeding along. It hasn't been bad just a little Un-CRACKED.

ONE EXTREMELY FOGGY NIGHT IN MINNESOTA: Another one-pager? Huh? Is this an odds 'n' ends issue? This one isn't bad, though.

CRACKED INTERVIEWS THE ANTIQUE KING: The smaller, non-zaftig Nanny is in charge of this one. Unfortunately for everyone, the quick-fast feel of the second half of this issue made this interview seem plodding. It didn't go anywhere new and felt a bit odd. If they're trying to tweak the format, don't end with this. This should have been in the slower first half. Oh well.

BACK COVER: "Great Moments in Science" Two brothers invent the binoculars and the telescope. Guess which brother has one eye?

Not a bad issue. The first half is solid and promises to make this one a classic. The second half goes off on a MAD-lite frenzy, which isn't half bad. But, it needs more space (like an entire issue) and it need some kinks worked out (Nanny). Overall, this one is worth a read but it may not stick with you. What's next? I've no idea. And, that is exciting. I'm CRACKED! What can I say?