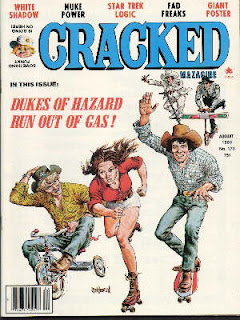 Here they are...Some new pop culture icons for us to feature on the cover. But, there will be a bit of a difference here. I'll go into more detail when we hit the parody.

POSTER: This one is an "Important Notice" on attention-grabbing yellow paper. It says that certain "onterators are traming on the permis of the derialtor." Stuff like that. They did another poster like this a while back. Big fake words warning us of something. Frankly, it worked better the first time. Unless, this is your first time seeing it. Then, what do you think?

TABLE OF CONTENTS: What the table doesn't show is that much of this issue is either MAD-lite or a throwback to the CRACKED of the mid-70's. I wish I could say that that was a good thing. Amy Stake - PrFFR RdEr

LETTUCE FROM OUR READERS: Next issue - June 3rd. Let's move on.

THE NOT-SO-BRIGHT SHADOW: The few times I saw The White Shadow when I was young the whole look of the thing depressed the heck out of me. This parody does too. It starts with one of those long two-page banner panels with lots of people talking in a row, a la every movie or TV parody MAD has ever done. I got bored halfway through the panel and moved on. There is a good joke here about how everyone seems to be either in practice or in the showers but that's about it. This thing goes on for seven pages and I'm just not getting the juice up for it. Yes, Gary Coleman appears in the end and it is awesome. But, boy, it's a long trip getting there. It's like driving through Nebraska - endless landscape with nothing to enjoy. You just want to get out.

CRACKED'S REASONS TO BE CHEERFUL: The last article was a MAD-esque bit of stuff. This one feels like it should have been written in the late-50's or early 60's. It literally is stuff to be cheerful about. Good friends, scoring high on a video game, spinach workers going on strike, flowers, summer vacations, CRACKED. A few of the illustrations are humorous but this seems more like a very long greeting card you'd sent out to cheer someone up. What an odd article.

SUGARLESS GUM AD: You know the "4 out of 5 dentists" thing. Well, this is about Number 5 and it's a funny one.

SITUATIONS YOU WISH YOU WEREN'T IN: Sort of the flip side to "Cheerful". Letting a vacuum cleaner salesman in your house. Going to the beach and getting rained on. etc and so forth... Ummm, what's the copyright date on this issue?

WHAT IS A FAD FREAK?: The irony behind this article feeling like it should have shown up six years prior is not lost on me. "Goes to Africa to trace his 'roots' - and he's an American Indian!" "Got into a yoga position six months ago - and hasn't figured out how to get out yet!" (OK, that one's kind of funny.) "Has more gears on his racing bicycle than a Mack truck!" Close your eyes and turn the page.

USING STAR TREK LOGIC AND TECHNOLOGY TO SOLVE LIFE'S EVERYDAY PROBLEMS: Way to keep those titles simple! It's a lot of Vulcan Mind probing and death gripping to pass tests and beat bullies. Your bicycle goes Warp Factor 8 to get away from a police man. When the dad's in the neighborhood show up to kill you for treating their daughters like garbage, you tell them that you're on a Five Year Mission to "get away with with what no other man has gotten away with before." The dad's accept that. Boy, I'm pretty sure Star Trek fans would have gotten their ass handed to them on a a platter if they had done that...but, why not give it a try anyway? (A platter of ass, anyone?)

YE HANG UPS: Funny but...Ye Hang Ups! It's been half a decade since we've had these. What's going on in this issue?

THE CRACKED WORLD OF SCHOOLING: Oh, Lord. We're back to MAD. 4 pages of endlessly old gags about people going to various schools. There's a joke about a correspondence school bartender making his friends drinks that he puts in first class envelopes. There's one about a lady gaining 20 pounds from taking a Chinese Cooking class. It goes on like this and it is dense and it is dull. Wow! I'm going to keep moving.

CRACKED'S RANDOM SAMPLINGS: This might explain it all. This four pager is nothing but bits and bobs, jokes and japes, that they rejected or didn't finish. They wanted to show us some of what they had sitting around. I don't know if this is true or not but it makes for far more interesting reading than most of the rest of the issue. A few bits:

Witness a man who's egg-cited - We see a man getting excited over a plate of eggs.

How To Pick Up Chicks - In two panels, a man picks up a woman and sets her down.

There is a three panel "CRACKED's Brief Guide To Handball".

A police station - A man wearing a trench coat filled with cats is identified as a famous cat burglar.

A CRACKED SALUTE TO NEW YORK CITY: Right back to MAD. Hey! There's a lot of crime in NYC! Wall Street is a street with big walls on both sides. Broadway has a lot of women waving at us. Battery Park...Well, you can guess that one. A lot of restaurant jokes and mugger jokes and Statue of Liberty jokes. Maybe they should head back to Detroit? Remember when they took them down a peg? Let's go back!

THE DORKS OF HAZZARDOUS: This one cooks along all right. The show was very repetitive and this one picks up on that: car chases, Boss Hogg's schemes, all that sort of stuff. Daisy has really short shorts on. The Duke boys aren't too long on brains but they got a lot of heart! The Dukes would show up quite a bit over the next few years and there is a difference between them and The Fonz, Gary Coleman or Mork. The writers seem to think the Dukes of Hazard is pure garbage. It is stupid and repetitive and...well, they're right. But, it is a bit more fun when they really get behind the icon they're going after (even if they don't seem to understand it, like the Fonz). Maybe the blah nature of this issue has worn me out but they'll do better stuff with the Dukes later.

CRACKED INTERVIEWS THE NUCLEAR POWER KING: Hey! That nuclear facility keeps having meltdowns and explosions. And, Nanny calls him on it! And, I am rundown by this issue. Nanny works best as a little bit of icing on the cake for a good issue. For an issue like this, which is below average, she can't save it. These bits never have that much kick to begin with. I'm rolling downhill right into the...

TOTAL - I messed myself.

BACK COVER: Harold the Weird invents the Adding Machine. Who cares? I thought we weren't doing these anymore?

This issue's kind of a stinker. It never gets going. There are only a few flashes of joy in here. It feels recycled, repetitive and rip-off laden. Please, guys, let's pull ourselves out of this! Please?

Next issue: Love that cover! Class...thy name is CRACKED!
Posted by Turbot's Finest at 9:07 AM