Cracked #169: Free Khambatta With Every Issue! 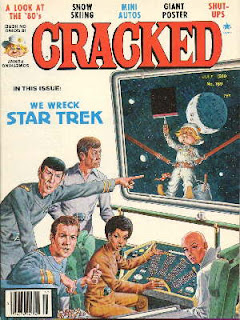 We started with Star Trek and now they have returned. But, this time with 40 million 1979 dollars behind them. Ahhh...I went to see this in the theater with my family. There were about 10 of us. We sat in a row up near the back. I got very sleepy and don't think I understood what was going on. Just prior to that, my Uncle Rog had introduced me to another sci-fi show that I really found myself enjoying. Star Trek: The Motion Picture convinced me that the other show was better. That show was Doctor Who and, 29 years later, I haven't changed my mind.

POSTER: Yellow is the color of my P**! "FINE FOR LITTERING IN THIS AREA." In smaller letters: "Even Better To Litter Around The Corner."

LETTUCE FROM OUR READERS: Monsters crammed into a coffin! Great image. Monster Fraternities! I want to join one. The French Canadian Blob! Next issue - April 22nd.

STAR DREK: An 8 page journey through the movie. I haven't seen it since it came out but this parody almost makes me want to see it again. Admiral Quirk keeps hitting the wrong buttons on the revamped Enterprise. At one point, he flushes the john. Comedy!! There are some good jokes in here and I never really noticed its length. As always, CRACKED's love of bigger drawings and fewer word balloons makes these things flow along. I'm looking at it to see what jokes really grabbed me but it's all just rather pleasant. A good opener to the issue.

THE COMING MINI-AUTO AGE - THE 1984 DWARF DODGEM: It's a really tiny car with some really entertaining drawings. You can pick the car up in a traffic jam and walk away. You can park four in a parking spot. Traffic cops can stack a whole mess of them on top of each other and haul them away. You can drive your car under a truck to keep out of the rain. A U-Turn? No problem. Stand up and turn it around manually. Good stuff. It's a fun article. I think the best bit is how to bypass highway tolls. You inflate a balloon in the back of the car and float over!

CRACKED HANDBOOK OF RESTAURANT OWNERS: This one's only 4 pages but it's so text-heavy that it feels much longer. Lots and lots of text with a "humorous" picture underneath. Sometimes they're amusing but there's so much reading here...Something like the National Lampoon has a lot of text but it's genuinely funny. The more text in a CRACKED article, the more you see the limitations of the writers. Most of their gags are things I could have written in Second Grade with no problem. I'd like to go into more detail about some of the jokes but they're things like "Put in Narrow Chairs" and "Turn up The Air Conditioning!" and "Don't Open a restaurant next to the Unemployment Office!" I can't get up the strength. Too dense for CRACKED.

ABSOLUTELY, POSITIVELY, UNQUESTIONABLY, THE VERY LAST OF THE CRACKED LENS: 4 pages and it a joy. Dracula and the Thing With two Heads. Wonderful.

CRACKED GOES TO A SKI MOUNTAIN: Oh, hell! This thing is back. Two pages of overcrowded drawings with jokes so old it hurts my sac. I've got a copy of these two pages hanging in front of me. Here are the prime gags:

"Did you see 'Downhill Racer' with Robert Redford?"
"No, I saw it with my brother!"

"I made a record-breaking jump yesterday. I landed on the lodge disco and broke three records!"

Notice how they all have exclamation points. I wonder if a subscription to CRACKED came with a free drum roll and rim shot record?

CRACKED PREDICTIONS FOR THE 1980's: Robot Westerns. Houses with "weather rooms"., There's a desert room and a snow room and a Tropical Rain Room. Discos will have anti-gravity. People will stop using oil. CRACKED will still be the funniest thing around. Maybe not everything here came true.

FAMOUS ANIMAL CELEBRITIES: Duck Van Dyke. Marlin Brando. Mike Walrus. Bull Bixby. Rabbit Redford. Elephant Gerald. Did I write this? At two pages, it's charming enough but these text-heavy bits are getting out of hand.

COLLEGE FOR PANHANDLERS: After having said that, this is the most text-heavy article I've ever seen. It takes the restaurant bit and one-ups it. In fact, it has the exact same structure. Lots of text and then an "..." at the end of the sentence that leads to the picture. Again, there's really nothing here that I want to go too in-depth on. Nothing really grabs me here. Sorry.

THE BILLY PLUCKETT STORY: A non-specific parody of uplifting sports films like Brian's Song. A little kid becomes a football hero and gets a bucket stuck on his head. It kind of goes on like this. It's breezy and it flows along but I'm not a fan of sports movies and so I'm not so juiced about this one. Let's keep movin'...

CRACKED INTERVIEWS THE TREKKER KING: Nanny goes to see a very nerdy Star Trek fan. He dresses up like Kirk, makes his kids talk in Starfleet terms and has his wife shave her head. She stays with him because he's rich so everyone gets everything they deserve. They go to a Star trek convention. They argue over the terms "Trekker" and "Trekkie". Nanny gets beaten up for saying that the movie wasn't very good. It's harmless good fun with some of our greatest nerds. Huzzah!

Total - A Beautiful Mess of telling people to clam up their pieholes! (Is piehole one word or two?)

BACK COVER: THE SWORDSMAN - A one-pager that looks like it's from the late 50's. Fun art and the joke is OK.

This issue was a bit of a slog. Some definite good bits but...What the heck? Who's writing this now? Text-heavy material is not something CRACKED should do. It doesn't suit them. The writing style here is far too simplistic. There's no kick to anything. Please, fellas, let's go back to the visual breeze that you specialize in. Please?

Next issue: Now with Mork gone...we've got some new folks for the cover.
Posted by Turbot's Finest at 8:40 AM