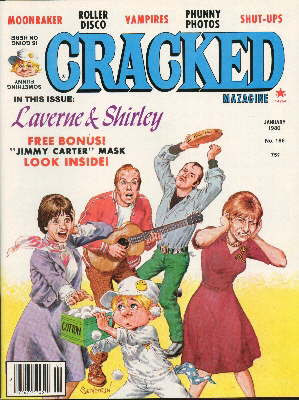 I believe it was issue 145 since we last saw "The Goils!" on the cover. It's nice to have them back once again. The cover flashes me back to 1976-77. Good times for CRACKED. I so want them to get back to those. And, notice...the "Free Bonus!"

INSIDE COVERS: A Jimmy Carter mask! His face on the inside front and the back of his head on the inside back. "Cut along dotted lines. Make holes...[hopping ahead] Put Over Head and Talk Southern"! Thanks, CRACKED

LETTUCE FROM OUR READERS: "Nothing covers up da smell of fish like CRACKED!" Thank you. Pretty straightforward batch of letters here. Nothing to astounding. I'm itching to leap in. Shall we? Next issue - December 18th.

LEVERNE & SHURLEY: 7 pages of shenanigans! Shurley inherits "two million" from her Uncle Lumpy. So, everyone goes crazy and they buy a lot of stuff and the "Linty-Squiggly Automatic Sock Putter-Oner!" is demonstrated for possible backing. In the end, they come right out and admit that all they do is recycle old plotlines from I Love Lucy & Leave it To Beaver. And, that's fine with me. It is actually very nice to see the gals back. It makes me think fondly of the show and how much I used to enjoy it.

THE HISTORY OF ADVERTISING: There's a Mr. Pumpersump and a Mrs. Wartwhistle. There is a dancing can of Slurpo Cleanser. A "hand bill" is an enormous hand with an ad on it. They drop a car off the Empire State Building. The Queen advertises Stripoff Floor Wax. See, this is what I like about CRACKED. This article is far to cornball (the "hand bill") but it's trying. Unlike all those "You Know You're Too Whatever When..." things that bore me to tears, stuff like this has some life to it. It's about 60-40 on the side of success and that's CRACKED kicking arse...as far as I'm concerned.

POSITIVELY THE VERY LAST OF THE CRACKED LENS: Another superb one. I would love to detail my favorites but these are so visual that there doesn't seem to be much of a point. It's got laughs and it'll make you smile. Keep on rollin', fellas.

WHEN BUSINESSES START GOING AFTER TH VAMPIRE MARKET: Vampires live forever and they will become a consumer force. We have the "Jiffy Fold-Up Coffin". You can fold it up and carry it under your arm. The "Necko Ladder" for midget vampires. "Gypsy Formula" A talcum flea powder to help out every time you turn into a wolf. There are magazines...Sundown, which is Playboy. There's a vampire on the cover of TV Guide. Two ladies are watching him. 1st: What makes you think he's a Jewish vampire? 2nd: He first dabs his victim's neck with chicken soup!" "Supervamp Comics" has Von Helsing on a pogo stick stake! Oh the fun. Poopsie's Carbonated Blood is great, too. Pump your victim full of carbon dioxide. Then, their blood is carbonated!

I know this issue hit stands in November of 1979 but it is the first one dated 1980. Could the new decade (more or less) have revitalized them? We're cooking.

ONE RUSTIC DAY OUTSIDE TIJUANA, MEXICO: OK, this isn't that great but it's got fun art and it's only one page. Move on.

THE CRACKED GUIDE TO FORTUNE TELLING: Playing cards, Crystal Balls, Palm Reading, Tea Leaves, Signs & Symbols, Gypsies and Horoscopes. Lots of fun drawings but a bit to text heavy. There are laughs. A tea reader calls a lady "Clone!" so we've still got that going for us. The various horoscopes are dull but the gypsy stuff is funny. (Possibly not that funny if you are a gypsy but...) Another good one. I want to give this issue a hug.

SPECIALIZED TV STATIONS FOR DIFFERENT INTEREST GROUPS: The station for intellectuals has shows like "Airplane Tires of WWII" and part 6 of "The World of Worms". (What that has to do with intellectuals I'm not sure but CRACKED seems to like it?) Channel 8 is for the average viewer: AN adult with the mind of a 4-year-old. They watch Howard Cosell interview a horse and "The Adventures of The Shapiro Family!" "5 people accidentally reduced in size must make a new world for themselves while lost in a vat of chicken soup. Tonight - Bad break for the Shapiro's [sic] when a killer carrot threatens to topple their make-shift matzoh boat." There's a channel for construction workers and old people and people who love violence. All pretty obvious, and all pretty fun. Nice.

An ad for an "Official CRACKED Reporter T-Shirt" follows. Awesome. Order two in case you pit one out.

THE TRUTH YOU'LL NEVER HEAR: Well, it can't all be good. "Doctor give it to me straight-what are my chances?" "They'd be a heck of a lot better if I weren't your doctor." Lame Town, USA. The jokes aren't funny. The art is pretty blah. Just let this one ride. There's nothing to see here.

MOONWRECKER: James Bond-ahoy! This one has some good laughs and some fun art. The space battle is entertaining and the bits with Jawz are fun. Maybe it goes on a little too long but it's fine. It's a movie so they're hitting all the pertinent points. And, their normal incoherent jumping-around-style works perfect for a Moonraker parody because that was a fairly incoherent film. To be honest, I would have preferred more bits like the TV Stations one but, if we have to have a movie parody, this is a good one.

CRACKED INTERVIEWS THE ROLLER DISCO KING: One of my favorite Nanny interviews. Lots of craziness with people dancing to disco on roller skates. He is named Kid Boogie and he does have a huge afro. This one is awesome. In the opening blurb, they mention how quickly fads come and go. I wonder if this fad was over before the article was published. Great stuff, though. Even Nanny steps up to the plate here. Joy.

Total - Comedy for you & me and your big fat Mama.

BACK COVER: Great Moments in Hunting. A caveman almost invents the bow and arrow but, unfortunately, hilarity ensues...right into his face! Ouch!

What a fine issue. One or two missteps here but the batting average is solid throughout. CRACKED is kicking again. The 80's have arrived and Mr. Sproul and fiends are here for us!