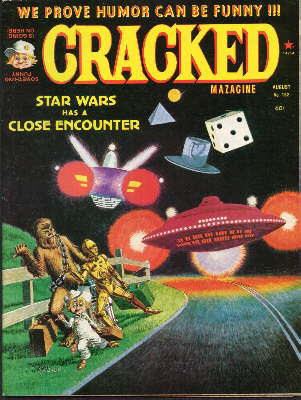 Just a note: On the table of contents page, it says "May 1978". This would have been the month when the magazine hit newsstands. Typos can be fun.

Now, that is a fun cover. There is only one way to top a cover like that...yes, it will be the cover of the next issue. But, for now, enjoy this one. It's just fun to look at. "Star Wars has a Close Encounter" is exactly what you're going to get.

POSTER: "This Poster is Condemned" A meta-poster from CRACKED. Yes, it does have a yellow background. How'd you know?

TABLE OF CONTENTS: Chuck Spellin' is this month's prufef Rdrr.

LETTUCE FROM OUR READERS: One page. It contains this letter from Tony Allen of Seattle, WA: "Dear CRACKED, I didn't see the need for that article A CRACKED LOOK AT OLD JOKES. Isn't that what the other 48 pages do every month?" Amen, brother.

A CLOSE ENCOUNTER WITH THE STAR WARZ GANG: This story takes place immediately after the end of Close Encounters. Royboy Neery gets on the UFO and finds the Star Warz gang there. Together, they go on a mission to stop Dark Badar from kidnapping people from all around the galaxy. He's dastardly! But, it's fun. The princess is kidnapped again. The gang has to get past the Knock-Knock Monster. They do this by killing him with bad jokes. They hide in a giant candygram dressed as chocolates. And, they find the kidnapped people and...they are all pop culture figures from the 70's. Is the Fonz there? Hell, yeah. And, Dark Badar calls him a "Nerd!" 1,000 smiles. In the end, Badar loses again and we see the Princess in a leather jacket yelling "AAAAAAY!" Wonderful. A great opener.

CRACKED'S METHOD FOR DEALING WITH TRAVELING SALESMAN: A man named Gumm teaches us how to deal with traveling salesman. You know, I'm not drunk right now but I'm getting buzzed off of CRACKED. This article is no better than any other one like this. The jokes are obvious with illustrations that bring a smile. Possibly it's the fact that "show don't tell" is a good rule for comedy but CRACKED (and MAD) always shows and tells that makes it a bit of a blah read sometimes but today I'm enjoying this. The man dressed as a baby. The saleswoman straddling the guy to stop him from running away from a refrigerator sale. The ways to deal with telemarketers. And the closing joke as a hand turns the page while Gumm tries to sell as his book. I loved it. Four pages of fun.

CRACKED'S INQUIRING PHOTOGRAPHERS VISITS THE STARS: So very odd. Promotional photos of Alan Alda, Henry Winkler, Telly Savalas, Farrah Fawcett and every other star circa-1978. And, they all have little captions and word balloons. It's all so hysterically lame I can't stop laughing. Example: What's the one thing in life you regret most? The Fonz says, "Never having Hamburger Helper as a child." What? What does that have to do with anything? The Alan Alda one is a Hawkeye-style one-liner but many of the others are big "Huh?"'s. What's your secret for looking so young? Potsie: "I made sure I was born much later than everyone else." Come again?

CRACKED VISITS THE "PROVERBS AND FAMILIAR SAYINGS" MUSEUM: Fun at three pages. A crowd is led through the museum by Carl Cliche. They see the straw that broke the camel's back and watch a man watch a pot that never boils. They examine a patch of grass from both sides. Things like that. At the end, Carl asks for money. Huh? Gumm?

Oddly enough, after last issue's Handufactured Products, this one feels like a repeat. I can't prove it but the art looks different. The crowd is made up of folks from the mid-60's. (The women's dresses give it away.) And, an article like this would be four or five pages if it were new. This one is far more concise than they usually are. Again, it's just a feeling. I can't vouch.

SAGEBRUSH: Sagebrush? Have they done a Sagebrush comic in the past three years? Maybe this was the page after the previous article in the original issue and they just reprinted all four pages? It's not a bad strip, though.

A CRACKED LOOK AT A STATE PEN: Hmmm...This looks like one of those multiple comic strips spread across the pages types of article at first. But, there are only a few of those here. The top is a series of one-panel gags about visiting hours. The bottom is a series of gags in individual cells. Then, you turn the page. And...there is a mini-spread in the center. The Penitentiary courtyard. Bad jokes everywhere. Why would you take an article that wasn't that great to begin with and expand it to four pages? I don't know. The only really good gag is the last one. Two guys being let out after twenty years. The jail provides new clothes. The final panel is one of them in a rabbit suit and the other dressed as a schoolboy circa-Little Lord Fauntleroy.

Well, they can't all be good. You've got to expect things like this.

SUPERHERO ADS: Lady Lib, Silver Cyclone, Major Dynamo and Friends are now advertising their services. Power your city block with the cycling power of Major Dynamo. Silver Cyclone can wreck buildings and clear areas quickly. It's for fun. At two pages, it breezes by. (This isn't an old one, is it?)

HONESTY ON THE TUBE: News programs with the regular announcer and a Resident Truth Sayer next to him. Stuff like: "No cause for the blaze has been determined." The Truth Sayer replies with "Maybe not, but the building owner, Al Gerb, was seen walking away, holding his monogrammed lighter and singing 'There'll be a Hot Time in the Old Town Tonight'." It's not bad just not very sharp. However, it's only two pages. Huh? Was this some sort of clearinghouse issue for old articles they never expanded to full term? Maybe? I don't know.

ISN'T IT ROTTEN IN SCHOOL WHEN: Not a fan of these. A picture with a "..." caption underneath. "...you raise your hand courteously, keep it up for long minutes, and someone shouts out the answer anyway!" Why is this one three pages? It's OK. A quick read. Maybe you've guessed the last one. If not, skim down to the bottom of the article.*

ONE MORNING ON JOHN SEVERIN'S DRAWING BOARD: A two-pager. Pretty fun. What's with all the breezy quick articles in this issue? I love it.

ONE EVENING IN THE MCDUFFY HOUSE: Another one-pager. Not as good as the previous Article but...It's fine.

HIGH NOONISH: One of their "classic" parodies. Not a repeat, however. This one begins as a High Noon parody and then morphs into another attack from...The Talking Blob! (He first appeared in #149.) Fun stuff. Every time an oldie pops up like this I guess we can expect the Blob. I enjoyed this. The twist halfway through keeps it interesting. An enjoyable parody.

CRACKED INTERVIEWS THE SKATEBOARD KING: Somehow this one seemed a lot easier to read than the previous issues interviews. Yes, Nanny is here. Yes, the skateboard king is a crook and a rip-off artist. But, the article chuffs along with a smile or two. I've got good spirits from this issue. This bit doesn't bring it down.

Total: Bravo! I smiled and laughed and shut the hell up.

BACK COVER: Something about head shrinking. Not a great one. Oh well.

I enjoyed this issue very much. The opening article really kicked arse and sent us flying. My good-will-o-meter was at a high here. All the brief articles really chilled my berries. (in a good way) This is a fun issue. I wish they'd do more like it.

NEXT ISSUE: Best cover ever?


* "...after 16 years of education, in your very last class you realize that school will be over and your troubles will really begin." Amen, everybody.
Posted by Turbot's Finest at 9:01 AM

It did make a very nice cover story. Though I never read it, I’m sure this magazine is one of the best seller magazines ever with over five million readers. Awesome…