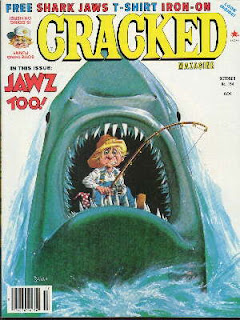 Welcome back, Jaws! Or Jawz! Sylvester will get eaten but he will return.

A one-page poster. "Do Not Remove This Screw" with joke. The background here is blue. Where'd the yellow go, I wonder? The back inside cover is, you got it, an iron on.

LETTUCE FROM OUR READERS: Next issue - August 15th. Still one page. Inflation continues to rob them of a page full of letters.

JAWS TOO!: (Not Jaws too!) It follows the plot of the movie. And, the joke's are all right. They beef this one up with all sorts of great cameos. Throughout the article, various stars pop up. Sylvester Stallone, George Kennedy, Marlon Brando, Farrah Fawcett, W.C. Fields and others. It adds a bit of extra verve and really makes this opening article fun. Possibly more fun than the movie.

CLONING: THE ADVANTAGES AND DISADVANTAGES: If anyone has ever read Calvin and Hobbes, you've read stories where Calvin clones himself. That's funnier. This is stuff like one cloned woman goes to work while the other stays home and cooks and cleans. A disadvantage is that no one can tell the difference between people in a police line-up. Things like that. It goes along...I had no idea that clones were such a big thing in 1978 that CRACKED did an article on it. Odd.

THE CRACKED LENS: Welcome, officially, one of CRACKEDs best continuing articles! The titles will get longer and longer. A Collector's Edition or two will appear. They will repeat some "accidentally". But, here is the first one. It's two pages and it's smooth as VSOP brandy.

WHEN BUSINESSES START GOING AFTER THE OVER-65 MARKET: Retired Playboy! Senior Skateboard Parks! Comic books for Super Codger and Starchie. Updated Peanuts strips for oldies. T-Shirts! Toiletries! Amusement parks! It's all here and it's all for olds! (That's plural for "old people".) A decent article. The comic stuff is the best. The rest is OK.

The issue is fudging along decently. It's a smiling read. Not one to jump up and down about but a decent, solid issue. so far.

THE CRACKED WORLD OF TRAVEL: This is the same set-up as the last two issues. Four page article with a mini-CRACKED LOOKS in the center. Some decent gags and, in fact, the best part is the (almost) two page spread. I'm in a good mood and this article is spreading along nicely.

YOU KNOW YOU'RE A SKATEBOARD FREAK WHEN...: You know the style of article. A little caption and a drawing matching up. The new wheels are here and everybody is skateboarding. Your girl sits in the back seat and the board is in front. You stare nostalgically at an old iron-wheel board. Junk like that. Two pages...breeze.

ODD JOBS FOR STAR WARS STARS: What can the characters do during the downtime between sequels? "Recently, the director of Star Wars announced that he was producing at least 10 sequels..." Wow! That went terribly wrong. Chewbacca- Demonstrating Hair Styles is the best one. A very fluffy Chewbacca with a hair dryer is an alternately funny and disturbing image.

TYME: A Time magazine parody. Lots of text-heavy articles. Some funny headlines and photos. This one is five pages and is, frankly, too long. It starts off fun but all the text drags it down and by the end I found myself skimming. Although, I didn't really mean to. Maybe someone with more attention span would love it to pieces.

FAMILY'S FEUD: The Dull and the Trill Family meet up with Itchard Doorson in a parody of the well-known game show. There are some good laughs here but a lot of it does that strange CRACKED thing...They seem to know exactly what to parody but they don't know how. They get the fact that some of these family's are really dull but all the jokes about them are pure 5-year-old level. A little more "Oomph!" would really make something like this great. As it is, it's a couple of smiles and carry on...

CRACKED INTERVIEWS THE PUBLICITY KING: Nanny! Big boobs! Mr. Irving Hype! This one is no world-beater but it flows along OK. Mr. Hype is a bit of a jerk. He'll hype anything. The crappier, the better. Oh well. I think we've come to expect the issues to coast to an end like this.

IRON-ON: The jaw of a shark. SMILE! You're on CANDID SHARK!

BACK COVER: Od and Nod Ooglog invent the cannon. There is an elephant with a spear in its trunk and a caveman with a big paddle. You can take it from there.

Not a bad issue at all. CRACKED makes me smile. This is a good smiler. Not a classic but solid workable CRACKED.

Next issue: Everyone back in the water!
Posted by Turbot's Finest at 12:20 PM