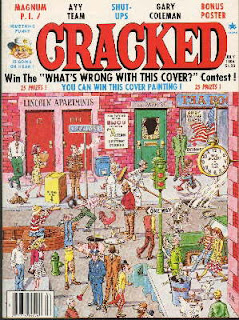 Great cover. I would have loved to have won the painting in this contest. I was buying issues at this time but I don't remember this one. Maybe I didn't buy it because there was no Pop Culture Junk on the cover. It's just a classic goofy Severin painting. It's too bad that almost a third of the cover is made up of the white header. Let me tell you real quick...Don't bowl in the street. Don't fish in the sewer. And, don't...DO NOT...put a saddle on a pig.

You'd think that was something everyone would just know not to do.

TABLE OF CONTENTS: Imogene is back as pruuuuf fder. I see Gary Coleman. And...I see a still from the Laurel & Hardy short The Finishing Touch. I saw that on the big screen in 1996. Hilarious stuff. Why remind people of hilarious things in this issue...unless, this issue is going to be hilarious...Do it, guys and gals!

LETTUCE FROM OUR READERS: Next issue - April 17th. What were your three favorite TV shows from this time? Mine were Manimal, The Rousters and Manimal. Have I already said Manimal?

MAGDUMB P.I.: Not a show I used to watch but this is a good parody. It all takes place around the place where Magdumb lives. Two guys show up to ransom off Magdmub and then the other guys at the wherever it is where they all live. It's a fast-moving parody with a couple of laughs that works because it's in real time and all stays around the same spot. I enjoyed this. It isn't going to send me out to watch the show but it was breeze of a read.

CRACKED HOLD-UPS!: Still surprising. A scientist with a tail. A robot eating nails. And gals running and lifting their skirts. Great stuff.

THE CRACKED GUIDE TO BASKETBALL: Repeat from #142

THE A-TEAM WAY OF DOING THINGS: It's like one of those Fonz articles from so long ago. "The normal way of entering a house." A kid yells "Mom, I'm home." The A-Team way...Mr. T bursts through the door! They're mostly like that. Whereas you or I might not destroy everything we come in contact with, there's a good chance that The A-Team might. Basically, that's the whole three pages...You might take garbage out to a garbage can. The A-Team packs it into a cannon and shoots it at their neighbors.

YOU CAN WIN: It's the Enter the "What's Wrong With The Cover?" Contest! page. And, again, it goes to Madeira Beach, Fla. 2nd and 3rd prizes: Atari Video Games!

DON'T YOU HATE IT AT THE MOVIES:
"...when your shoes stick to the floor to the point where you simply think about leaving them there instead of wearing them?"
"...waiting hours in line and the show gets sold out right before you get a ticket?"
"...getting caught in the middle of a straw wrapper war?"
"...when half of your malted milk balls are hollow and stale?"
"...when the snack bar counter is greasy from popcorn butter?"
"...that your hot dog is half the size of your hot dog bun?"
"...when a couple in your row decide to re-enact their own version of 'Romeo and Juliet'?"
"...when the only vacant set is in the front row?"
"...sitting next to a guy who laughs at parts that no one else think is funny?" (Slasher Alert!)
"...when the only vacant seat in the hose happens to be behind a professional basketball player?"
"...when the missing letters on the marquee make it impossible to figure out what's playing?" ("Y_CA_N__DA_U__SE" & "T_A___K__BD___GHT")

For some reason, I felt like writing it all down. Make your own decision on quality. The art is fine.

THE MORE THINGS CHANGE THE MORE THEY REMAIN THE SAME: "In The Past"...."Over The Years"..."Nevertheless..." It's an OK bit. It's rather MAD-like. But, it goes on for four pages and that's too long for me. It's not that great. One example: "In the past man traveled at a snail's pace." We see a Biblical-era man walking. "Over the years man invented faster and faster forms of transportation." A train shoots along a track. "Nevertheless, man still travels at a snail's pace." Traffic jam!!! It's all right. Not a great bit but all right.

ABSOLUTELY, UNQUESTIONABLY, POSITIVELY, UNDENIABLY, THE VERY, VERY, LAST OF THE CRACKED LENS (and we really, really mean it this time, for sure!) Part XXIV: Four pages of fun...but there is that L&H still. Makes me think I could be watching those guys and enjoying them rather than tripping trough the uneven world of CRACKED.

ALAFFIN'S MAGIC LAND: If this ain't a repeat, it should be. Kid rubs the lamp. Genie flies out. The kid and his two friends want to be a big rock group. You take it from there...

THE GARY COLEMAN WORKOUT BOOK FOR KIDS: Not the funniest bit but it is nice to see Gary Coleman again. Gary lifts a 30 lb. salami over his head and then takes a bite. He stretches his arms to get the cookie jar. He uses the Video Pushaway at the arcade. It's kind of an underdrawn article but it's worth a read.

CAT GIFTS FOR CATS WHO HAVE EVERYTHING: Two pages of fun (mostly famous) cats hanging out with their cool stuff. "Imported French Fleas" "Fridge With Private Door For Tabby" "Curtained Kitty Litter Box" A "Cat Sampler" that reads "Every dog has his day but the nights are reserved for cats."

HUDD & DINI: They try to escape...but they don't make it!! Gorillas are involved.

Best bit here is the little drawing on top. Dracula, as a bat, flies into his castle and finds that a cat is using the soil in his coffin as a litter box. it's fun.

BACK COVER: Great Moments in Safety...Og Bog Almost Invents The Life Preserver...But, he doesn't. Not really.

This one didn't turn out to be high hilarity. Well, all the attempts at crazy satire from two issues ago and all the attempts at new twists on old jokes are gone. We have returned to the old world of CRACKED. And, frankly, it's sort of boring me. The repeats aren't helping either.

Not a bad issue. Not a great issue.

Next issue: Hey! There's a combination!
Posted by Turbot's Finest at 12:37 PM