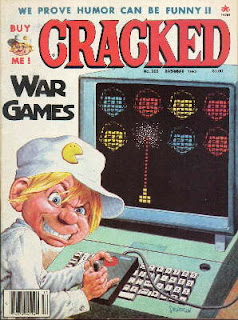 I expected some sort of celebration. But, I guess they're keeping cool. Such an historic occasion...well, they are zapping the competition! But, the "BUY ME!" in the corner seems a bit on the "begging" side of things.

Let's go in and see what they have for us...

POSTER: "POBODY'S NERFECT" And, to commemorate 200, this is on a Pee Yellow background!

TABLE OF CONTENTS: Imogene E. Uss...again. I don't see much that looks really celebratory but looks can be deceiving.

WAR GAINS: A 7-page parody of this rather iconic (not incredibly iconic, just rather) 80's film with Matthew Broderick and a goofy computer. When one character says that the men who hover over the button froze, the army guy says that the air conditioning should not be up so high. This parody feels to me like a MAD parody. The jokes are less based in "Your Grampa's Puns" and more based in attempting to be satirical. Does it succeed? Well, I read it and it never caused me any trouble. I would describe this as a slightly atypical CRACKED parody that's good for some "chuckles & laughs".

THE CRACKED GUIDE TO HOBBIES: For four pages, we will learn about hobbies. "Some hobbyists raise pets." There is a guy with his dog attached to a a pulley system. The dog is in the air. One kid tries building models. Cheryl Tieggs![sic]. There is the suggestion that you try finger painting...Can you guess what the kid is painting? And, in the end, a kid is collecting CRACKED...Hmmm...Issue 200 material? Not really. Decent CRACKED material? Sure.

HOW TO BUY A NEW CAR: I showed my wife this one, as she's planning on looking for a new car soon. Divorce proceedings began on the 21st. This is structured like an older article (at least, that's what I thought) but I don't know where it's from. What Kind To Buy?... Choosing A Dealer... Getting a Good Deal... PITFALLS TO LOOK FOR... THE TRADE-IN... FINAL WORDS... (I don't know why I went All Caps halfway through there but I trust my judgment.) There is a Let's Make A Deal joke...Funny that most of the previous Hobbies bit was for kids and then this article is for adults...Who was this magazine for at this time? Because, this is when I was at the height of my enjoyment.

Checking the Wegmans or Bells every time I was in there...dying to grab the new issue...I do remember buying this one...From here until the end of 1984, I was at my CRACKED Height!!!!

But, what about this issue #200? I don't think I would have cared about the number when I was a kid. Hell, it was 1983. What would I have been able to do? Collect the other 199? I had an account on Ebay then but there was nothing for sale. It was just a blank screen.

WHEN ALL OF TELEVISION GOES 3-D: Bullets fly off the screen during the news! Archie Bunker will flick cigar ash on your carpet! Politicians will lean out of the TV to shake your hand. I like these kinds of bits. And, at three pages, it doesn't stretch the premise. You get some good gags and then you move on.

ACCESSORIES THAT DUPLICATE THE THRILLS OF ARCADE PLAYING RIGHT IN THE HOME: Defective Change Makers only $195. A Life-size Truant Officer $28.95. (What is a "Truant Officer"? I was 10 when this came out and I never saw a Truant Officer". Flying Elbow Attachment $49.50 "Authentic Arcade-Type Kibitzer Dummy" for $38.33. Says stuff like "Look at da hotshot blow another quarter!" I was hoping this would be more than 2 pages.

THE CRACKED LENS: Repeat from #173. It has a longer title but if they're just going to repeat this bit...I'm just going to leave out the full title. Eddie Albert is in here, too. Check out my Green Acres Reviews link to the left. Hey! They repeat, I advertise.

THE CRACKED GUIDE TO HOCKEY: Now, I'm just becoming suspicious. I was pretty sure that they'd done this before...But, I don't see it in the issues I've reviewed. So...It's another Sports guide. Some wacky illustrations, "Now, let's try shooting at the net." is illustrated by a guy drawing a gun and shooting the net & fighting and endorsements are mentioned. Yes, there is a hat trick joke that involves the ref pulling a rabbit out of a hat. You know, I don't have much energy in this issue...possibly I expected something bigger and better for the 200th and the Regular CRACKED isn't cutting it. Sorry.

Thanks, Original Owner! If these look like your choices, give me a yell. We'll discuss Fun With Cracked!

HOW PAST EVENTS MIGHT HAVE BEEN REPORTED WITH A GOVERNMENT-CONTROLLED PRESS: Repeat from #124

I didn't actually say what I thought about the Teen-Age Driving thing. It's OK. Like all of this issue.

YOU KNOW IT'S GONNA BE 'ONE OF DEM DAYS' WHEN...: Oh boy, this had better be the all-time best one of these! Let me read it...Oh heck, it's not. Sigh...And, we're near the end. When does the celebration begin? "...the septic tank overflows the day of your planned backyard Bar-B-Q!" "...you see a dark funnel-cloud whipping down your side of the street!"

CRACKED INTERVIEWS STAR WARS CREATOR GEORGE LUCRE: A decent 4-page article with two folks who aren't Nanny asking George where his ideas come from. The half-finished Death Star is based on his first Frisbee after "Spot" got through with it. Light sabers come from two custodians arguing and fighting with florescent bulbs. (Not something you want to try at home, to be honest.) Jabber the Nutt came from spilling butterscotch pudding. (You had to be there.) The inspiration for Krankor? An IRS guy! Ha!! Well, this bit's OK. Just four pages of this kind of jokeballery and some of it was funny. I think this is a decent closing article for the issue.

Shut-Ups, you are no longer on Comedy Parole! Keep those laughs coming.

BACK COVER: Sagebrush. 2 strips..a couple of giggles. Decent back cover...Although, the Sagebrush orange and mustard yellow color isn't too enticing.

So, what to say about Issue 200 of CRACKED? From its humble beginning around March 1958 until this point, the end of 1983, CRACKED has pushed to elevate the Yuk-O-Meter of America and the World! Has it always succeeded? No. Has it succeeded quite a bit? Oh, here and there. Did #200 say "Hooray For CRACKED!"? No, it didn't. 12 pages (at least) of repeats seems lazy to me. Was there some sort of Special Edition that celebrated this? Because the issue itself did not.

Now, there is absolutely no reason for CRACKED to celebrate if they don't want to. I think this might have something to do with Mad Magazine's #200, which also went without celebration. (Thanks for the scan, Doug.)

CRACKED, there's no reason to follow MAD so slavishly. You should have lived it up. It was your 200th issue, after all.

Next issue: I remember buying this issue, too. I hope they all wake up in time for #201. Fingers crossed.
Posted by Turbot's Finest at 11:33 AM

Dear Pierre,
Sorry to have to go back to this but it's necessary in light of the lousy job Cracked did with its 200th issue. If you want to read some true celebratory issues of Cracked, you need to read some of the Mort Todd (Michael Delle-Femine) issues from the late '80's. He was the best editor Cracked ever had and really knew how to make the reader feel like a part of the gang. His 29th and 30th anniversary issues of Cracked in 1987 and 1988, along with issue #250 were fantastic celebration issues, the way #200 should have been. Trust me, his issues are a lot more exciting than the ones you are reading now, and I have read them all.
Tom