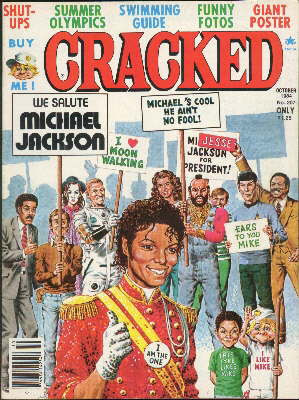 Michael at the height of his Living Fame. It's a fun cover. Kind of fades into strange blue figures after Boy George but still cool. Now, of course, a Pop Star is not the same thing as a character in a TV show. How much can you parody from someone who released a big, big, big album but wasn't appearing on TV every week in their own show? Well, you go after the videos, you go after their commercials, you go after their personality. Michael later in the decade would have been a lot wackier. But, this issue, oddly enough for this time, is actually quite good. Join me...

The heck! Those aren't The Jackson 5! You guys!!

TABLE OF CONTENTS: "Lem E. See, ppppf r der" Hi, Lem. Welcome to the magazine.
Here's an odd thing...One of the little pictures on the side is from the "Opposite Page" of the Hold-Ups. Interesting.

IF MICHAEL JACKSON HAD STARRED IN...: Michael in everything! "ET" & "The A-Team" & "Star Trek"...Of course, Michael was with The A-Team in the last issue but he didn't have a Mohawk...He's a Vulcan on Star Trek and they meet Boy George. It's filled with entertaining chicanery of the sort that CRACKED Dutch Rubs on your ass in every issue. Now, the puns are out in force here..."Here you go, Mr. Spock." "A tube of Poligrip? What do I want with this?" "Someone told me that the captain's bridge was loose." This stuff is fun but Oh, the puns!!

ABSOLUTELY, UNQUESTIONABLY, POSITIVELY, UNDENIABLY, THE VERY, VERY, LAST OF THE CRACKED LENS (and we really, really men it this time, for sure!) PART XXVI: 4 pages of yuks and waiters dancing through the air and Rosie Grier in overalls and Charlie Chan and it's good stuff, as always.

THE '84 OLYMPICS GO COMMERCIAL: Everything Olympics-related has a sponsor. A man with a Bic lighter lights the Olympic flame. And there is a "Free Commercial Plugs Final", which Ronald McDonald wins! The third page has various ads, like Canyon Towels perfect for crying into and "Winners Can be Losers" - a lady with dandruff has won! Very visual bit and pretty amusing.

The 1984 Olympics were the ones I watched avidly as a child. I loved all the ads. All part of the fun.

CRACKED HOLD-UPS: Wonder Woman and mermaids and old ladies falling into manholes. "STOP! Don't read this page first! The fun starts on the back of this page! Turn back and enjoy the surprise...just for the fun of it!"

THE CRACKED GUIDE TO SWIMMING: 4 pages of OK stuff. It has a nice "Guide" flow. There is a man dressed as a kangaroo and a fat lady. A guy dives into a shark's mouth. Some guys go to the beach. There is a "No Dogs Allowed" sign. So, ugly Bertha-Mae isn't allowed! The backstroke has funniness within it. One guy dives into shallow water and hurts his neck! I wish I'd learned how to swim from this. I just hit the water and swam! No comedy involved...CRACKED please teach me.

CRACKED'S TOPSY-TURVY VIDEO GAME PUZZLE PAGE: There's a word puzzle. The words? "Asteroids, Centipede, Defender, Donkey Kong, Frogger, Pac-Man, Pengo, Phoenix, Qix, Turbo" Let's play all of them. There are all sorts of fake goof puzzles. A Maze that grabs your shnuts. "Which of the Pac-Men Below Are Twins?" This only goes for two pages and should last for more. I like it.

A CRACKED LOOK AT SUMMER CAMPS: Repeat from #145

TALKING EVERYTHING: Talking shoes mean that every morning we can "expect to be greeted by sole-ful comments." Washing machines, boom boxes and wallets they talk. And, they're sassy, like Dee Thomas! The bathroom scale nags your big, phat arse. Diaries have alarms. It's charming and it's a Nutrocker. Enjoy.

ONE FINE DAY AT THE BOWLING ALLEY: A guy from Bonz Demolition Co. figures out a way to stop gutter balls. The nut!

THE MAKING OF THRILLER: This is a fun article, narrated by Michael. He tells the story of how the classic Thriller video was made. It's a CRACKED LENS-style article. Michael talks. And, we see assorted stills (Herman Munster, Barnabas Collins, dancers, marching bands, Bob Hope) that relate Michael's story. This is a six page bit and it works. It's just the standard sort of article that CRACKED does well linked to the Absolute Magnificence of Pop Culture at the time. Well done, CRACKED.

THE WISH: Wacky art and a strange, almost grotesque, closing panel. But, a good gag.

CRACKED'S SUREFIRE EXCUSE KITS: All right, well, this one has a lot of text. One big drawing for each kit with all sorts of arrows and explanations and craziness and it's OK. "Dog Ate My Term Paper Excuse Kit" You get a partially chewed-up paper, fake claw marks and band aids, X-ray of your dog showing paper in tummy, reference pages that show you did your research. It's stuff like that. There's a "Ran out of gas" and a "Flat Tire Excuse Kit" and others. It's OK but a bit overdone for my tastes.

BACK COVER: Cool drawing. Great Moments In Sports. The invention of Sky Diving in Monga Wanga circa 304,787 BC.

I like this issue. It moves and it's fun. The stuff that works outnumbers the bombing moments...Is this a new upturn in the Final Sproul days of CRACKED? Or is it the Last Gasp? Let's look ahead...

Next issue: The Return of The Awesome Action Hero!
Posted by Turbot's Finest at 9:45 AM

I love to read more of this cracked magazine. Thanks for all the reviews.