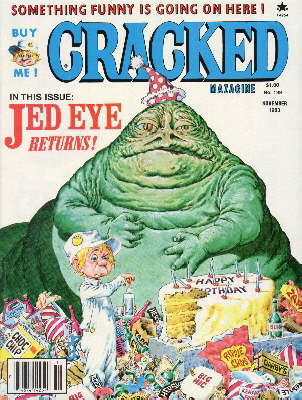 Jabba The Hutt has a little too much to eat. He doesn't seem to be in his palace because there's nothing but white behind him. But, he has eaten quite a lot..."Ripple Chips"? Do those contain Ripple? And, of course, he had a "Big Mic". The glass of "Burp" is fun. All that detritus at Jabba's base reminds me of some sort of Product Round-Up for the Wacky Packages. And, of course, Sylvester's on it...Some "Alke Sellzer" to make Jabba OK.

You'd think, after all the Star Wars hoohah and the rather sizeable-ish Empire Strikes Back kerfuffle, that they'd do more on the big "finale" to the series...A joke about Jabba eating too much is funny... But, he's that size anyways. It seems a rather lame joke for the cover. Looks good at first and then makes me think "You guys couldn't do a kickass killer cover for this?" When Jedi came out, I'd read the novelization twice and saw it on opening day with a crowd of friends. It was, at that time, the best film I'd ever seen. And, I think it was that way for a lot of others. Why wasn't CRACKED quicker off the mark?

I also question the lag here. Everyone in the world knew that Jedi was coming out at the end of May...Why is the CRACKED parody in the issue that came out in August? Why not June or July? Rush it through...it's the third Star Wars movie for Heaven's Sake!

POSTER: DO NOT STRAIGHTEN THIS POSTER! It's off center within the cover borders...and it's pee yellow and the "wall" behind it is blue. Interesting colors.

TABLE OF CONTENTS: Seymour Errs, prprrf RDrer. A guy with a chainsaw-ish item and R2-D2 bowling! Say, this might be great after all.

LETTUCE FROM OUR READERS: Next issue - September 20th

"Dear CRACKED, ...When, oh WHEN is your satire of RETURN OF THE JEDI going to be appearing in CRACKED??" "...as soon as you can turn to Page 6." Had they forgotten about it? There is a Lone Ranger/ Loan Arranger joke here. And, they just released another "SHARK COLLECTORS' EDITION".

Wait a second...Jaws 3-D came out on July 22. And, the issue that came out around the release date had a Jaws 3-D cover...But, the Jaws 3-D related article didn't actually reference the movie, apart from saying it was in 3-D...In fact, it still had Roy Scheider in it...So, they rushed out the Jaws 3-D cover with a supporting article that has nothing to do with the movie because they hadn't actually seen the movie...But, the biggest film of 1983 has to wait three months? Odd...I don't think they were paying attention.

RETURNS OF THE JED EYE: Of course, it starts with Blubba the Hut and proceeds swiftly through the set pieces. They do mention the June(?) Time Magazine that was all about Jedi and gave away stuff that happened in the movie. I remember that issue and I thought it came out before the movie was released. Well, it was 27 years ago so my memory is a touch hazy.

8 pages long and a nice parody to close off the trilogy. I am glad they watched the movie. I did complain but this is a decent parody, although they really didn't need to point out how much merchandising there is...I think they've done that previously.

So my troubles were all my own...This is a good opening parody for the issue.

PAST, PRESENT AND FUTURE CHANGES IN SPORTS: Let me cover one:

It's a fun but obvious bit.

SIGNS THAT IT'S A COMPUTER AGE: It's two pages and there are some smiles here but they all come from my current comparison of the CRACKED Then and the CRACKED Now to My Now. There are jokes about kids learning the value of a dollar because of change machines. Video game inventors are now the BMOCs! Technology makes things really tiny. And, alphabet soup has letters with "computer" fonts in it! It's OK. I'm not falling out of my seat but I am smiling.

ONE EVENING IN A FANCY RESTAURANT: Repeat from #135

THE CRACKED GUIDE TO KITE FLYING: 4 pages...and another fun bit. Maybe I'm in a better mood today than I was during 198 but this is several swift, decent pages. I love "If you have to leave your kite while it's in the air, tie the string securely around an object you know won't be carried away." A kid ties his kite line to a fat lady! Killer stuff! The art in this one is nice and chaotic and the jokes are OK. I don't know...You start the issue with something strong and it carries along a while.

INCREASING CONSUMPTION IN ORDER TO MAINTAIN FULL EMPLOYMENT: Repeat from #134 (The Fonze!)

YOU KNOW YOU'RE A REAL MONSTER IF...: I could swear that this two pager is a repeat...but the guy with the chainsaw-esque device makes me think it must be post-1980 and I haven't seen it in a regular issue. Well, I love monsters so I love this...

Just saw this "Brian Buniak '83" at the end of the article...This is new. Sorry, CRACKED

"...the shaving commercial turns you on more than the program itself!" The Lon Chaney Jr. wolfman really likes those commercials.

All the monster's in this look pretty great. This is a cool bit. I wonder if it's in a CRACKED MONSTERS COLLECTORS' EDITION?

THE CRACKED FIX-IT YOURSELF MANUAL: by M. I. Handy. Maybe not so much MI! Oh, the laughs...Mitchell Irving Handy wrote the book. He shows us how to fix a broken chair leg & Troubleshoot TV Problems & Repair Hand-Held Hairdryers & Repair a Washing Machine & Fixing a Squeaky Door & Plumbing...I will admit that when I saw the title my heart sunk but this isn't bad...It cooks along for four pages. There are some fun drawings and some decent gags. TV won't turn off...Solution? Shoot it!

ABSOLUTELY, UNQUESTIONABLY, POSITIVELY, UNDENIABLY, THE VERY, VERY LAST OF THE CRACKED LENS (and we really, really mean it this time, for sure!) PART XXII: 4 pages, 20 laughs! Enjoy! The best one? Two guys standing in a graveyard. "Well no wonder I can't find my (hic) mother's grave. I just remembered...she ain't dead!" I think there is a still from Seven Dwarfs To The Rescue here. Nice.

HOW IS IT THAT...?: Oh, there's the filler! Three pages of this and we'd been going so strong in this issue. "When kids eat candy YOU'RE NOT EATING PROPERLY and IT CAUSES CAVITIES." "When adults eat candy they HAVE A SWEET TOOTH or NEED THE ENERGY?" "If you forget to renew things, you're IRRESPONSIBLE." "If adults forget to renew things, it SLIPPED THEIR MIND!" Next!

ONE DAY IN METROPOLITIS: Repeat from issue #136

Hey, these Shut-Ups are kind of mean! Why am I just noticing this now?

Woman: "...an' last night I saw Sylvester Stallone...tonight I'm spending an evening with Burt Reynolds!!"
"Friend": SHUT-UP!! You're not the only one who goes to the movies!"

Why yell at her? She doesn't have a wedding ring on. Clearly, she's lonely. Don't yell...I'm keeping an eye on the SHUT-UPS from here on in.

BACK COVER: Repeat from the back cover of #125.

12 Repeat pages. Less than last time but...I like this issue more. I don't think they've lifted themselves out of any sort of rut. I just think that this issue is (mostly) what CRACKED does best. This one's fun...