WE HAVE FUN WITH VIDEO GAMES 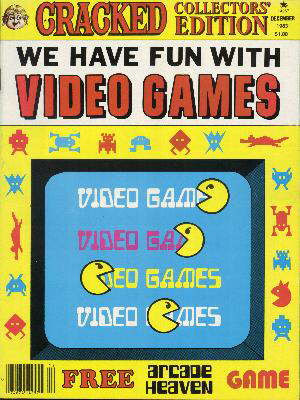 A little break before the Final Five. As anyone who was a kid then knows, if you didn't go crazy for video games, you were a lonely kid. My cousin got an Atari 2600. The Boesels got Intellivision. The Romanos got an Atari 5200. Aunt Mary got a Colecovision. Then, my cousin got some sort of computer thing that we played Miner 49er on all day long. It was awesome.

Eventually, we got an Atari 2600. The games were all awesome, even when they clearly stunk to High Heaven. I remember very clearly the nights that we got Pac-Man and then Donkey Kong. (Maybe not in that order.) Kids came over. We sat and played for hours. Although, Pac-Man was the same badly designed board over and over. And, Donkey Kong was the same two boards again and again. Eventually, we had about 13 or 14 games. Then, in the mid-80's, it ended. In a few years...Nintendo. Another story.

The arcades? Well, apart from Chuck E. Cheese, I never used to play, just watch. Tokens for video games - I used in video games. Actual quarters - Better use was put towards buying books. (I liked books. My Target collection of Doctor Who just kept building.) I remember standing for an hour near a Dragon's Lair game that had a monitor over it that showed the gameplay. I watched (along with about 12 others) as this guy won the game. It was pretty thrilling. Then, I went home and played Swordquest: Earthworld and annoyed myself.

Seen today, that seems like a strange age where some playing in the arcade and all playing at home felt like it had a gauze over it, especially when you saw Nintendo a few years later or games today. The games were so poor but we loved it so much. I have an Atari 2600 today. I have about 40 games, more than twice what I had back in the day. Playing it is fun. The games are still a hoot but it feels like it was from 1,000 years ago. Music, movies and TV are different. What an odd feeling...the Video Game Memories.

But, of course, all of this isn't getting CRACKED reviewed...move on.

Fun cover. And, of course, the promise of a "FREE ARCADE HEAVEN GAME" is a thrill. The cover is so busy and fun that it almost makes you forget the Pee Yellow background.

INSIDE FRONT COVER: THE CRACKED BOOKSTORE! Wow...they still owe me stuff. SUPER CRACKED #15 - Unemployment Game KING-SIZED CRACKED #10 - Fonz For President T Game. (I'm not sure what a T-game is but I've got my ideas.) GIANT CRACKED #21 - Vampire Game! I want all of these!

TABLE OF CONTENTS: I love when CRACKED does what they do with the photos on the right side of the page. Three big pictures of coin-op video games: Space Invaders, Pac-Man and Defender. Just three pictures, no jokes. It's enough that they show them. Like the big poster of The Fonz in #134. No proof reader. Val Mayerik is one of the artists...the heck?

Most of this issue is new stuff. If I hit something I recognize, I'll tell you.

LETTERS TO CRAC MAN: Oh yes. Truant Office jokes! The flow of jokes actually has a storyline. People play games. People spend money. People get mad at the games. They break records; they don't. And, in the end, a guy (Melvin Bluenote) prefers the change machine...he keeps his money. CRACKED, I have learned from thee.

THE CRACKED WORLD TO VIDEO GAMES: Repeat from #184. Two things: 1) It uses the same "change machine" thing as the letters page. 2) The game is not "Space Explorers". It is "Space Exploiters". Pierre goofed. Go back to the entry for #184 and jeer at my fallen pants.

ARCADE HEAVEN: Board game on two pages! You start on the outside and play and play until you get to the center...All sorts of great squares and video game icons. "Town Puts a curfew on all arcades - Back 3" "You get a bronze joystick for your birthday. - Ahead 4." Stuff like that. Space invaders, Ms. Pac-Man, Frogger...kick-aresery. I love this.

THE CRACKED VIDEO LENS: It's 3 pages of great. All the classic stills we love but everyone is about video games. A teacher strangling a student. Teacher: All right Johnny, I give in! You can take the day off to play "Q-Bert"! Charles Kuralt looking at us. CK: And now that you've been totally bored to death by another one of my on-the-road reports, I suggest you turn off the TV, plug in your video computer and play "Tron". Great stuff.

VIDEO TECH: It's the college for video game players. The Spring/ Fall 1983 Catalogue. 5 killer pages. I wish I could replicate this whole issue for you, especially this bit. You'd be swimming in it. As it is, I'm overwhelmed and not sure what to single out. There's a page of courses (Introduction to Super Zapping and Trakball 301). Campus Life, including the ceremonial "Changing of the Dollar". And, I think, my favorite, the Campus Map. Intellivison Avenue is near Hyperspace Road. Pac-Man Park is a park shaped like... Atari Drive is near the Tempest Memorial Gymnasium. Random Token & Coin Changers dot the grounds. You have to see this article.

TV CONTRAPTIONS WE'LL SOON BE SEEING: Repeat from #157. Better here than in that issue.

THE JOYSTICK REPORT: "The Latest Blips and gossip from the video game world". It's two pages and, while it's not great, it's definitely a lark. The one that really grabbed me..."The boxes of those home video games usually look so much more interesting than the game themselves." We see "Alien Attack" A spaceship speeds towards a planet. Then, we see the game...One small ship shooting tacky bullets at a lame alien. "Blip-O-Vision has decided to buck the trend. The company's games are going to be much more interesting than the containers." We see the "Jungle terror" box and it's a Pitfall-looking guy going up a vine being chased by a crocodile. Then, we see the game...it looks like a cool cartoon...I always loved in "Starcade" when they'd offer the game "Kid Grid" and another (that I don't remember) as prizes. The boxes looked so cool but, when I saw screenshots of the games...they were hilariously horrible. I guess there was a great deal of "Turning a Blind Eye" being done then as long as we could play games.

GREAT MOMENTS IN VIDEO HISTORY: 4 pages. I'm not terribly thrilled with this bit but it's OK. It's too much like the Video Lens from early but with more explanation for the jokes. "April 1983, a New Hampshire youth went so far as to sell 'Money Trees' in order to earn quarters for Frogger. A family is shown with a "Money Tree Souvenirs" sign. A kid says "A beautiful Money Tree souvenir for your husband, lady?" And, there is something very funny about the crooner with his hands out who, in the still, is clearly singing but in the mazagine he's saying "Awwh. Come on. Won't somebody please give me a quarter to play 'Stirke Force'?"

ILLUSTRATED VIDEO GAME NEWS: Well, now maybe they're begin to repeat themselves. It's a mix of The Joystick report with CRACKED Lens photos. "Video Game Hotshot Plays Defender for 67 Straight Hours" is accompanied by that shot of the guy from The Alligator People getting scaly. "Video Game Theme Park Declared a Huge Success" is accompanied buy a shot of an ape throwing a guy around and a giant chicken. (Joust, sort of).

YOU KNOW YOU'RE REALLY A VIDEO GAME FREAK IF...: "...if your idea of a nerd is a guy who actually spends his lunch money on lunch." In high school, I spent my lunch money on cassettes. The catalog of Rush and XTC's Oranges and Lemons were purchased during weeks I skipped lunch. "...if the only chips you're interested in are microchips." We see a guy at the "Vendo-Snack" giving a Thumbs Down to Potato Chips! "...if an earthquake rattles the arcade you're playing in, and you think it's just the special effects." Taken from Starcade Episode #59. It's two pages. It's brief.

NEW FORMS OF HOME ENTERTAINMENT: Well, they are beginning to repeat themselves, in more ways than one. Repeat from #143

VIDEO GAME CALCULATOR READOUTS: Fun. One page with 12 different...wacky things to do on your calculator. Example: 4. The Organization that demanded a female version of Pac-Man (1634690 divided by 2) 11. The feeling that describes someone who's mastered the fourth and final screen of Donkey Kong. (24806 x 2 + 5566) Super cool.

I'd forgotten there was a fourth screen in Donkey Kong.

INSIDE BACK COVER: VIDEO PUT-DOWNS. Three panels with stills and shanks! Fat ones! One example: A man, a lot of cops and a crying woman. One cop is looking at the man. "Mr. Willard, your wife claims you pulled the plug on her while she was playing Asteroids. Is this true?" It's an OK page.

Well, it does fade near the end when things become a little repetitive. You can do that with Monsters but Video Games require a little more variety. However, this is a kickbutt Collectors' Edition. I recommend this one for anyone whose experiences were similar to mine.
Posted by Turbot's Finest at 11:47 AM

There was an earlier Video Games Collector's Edition in 1982, which is very simliar to the one you just reviewed. Also, there were many Cracked Video Games specials in the '90's.

Lots of great issues in the late '80's and '90's. The Sproul era was far from the end. As an adult, I collected and purchased all the '90's issues that came out after I had stopped reading Cracked in 1991 (I had already read the '70's ones). I found that I enjoyed them quite a bit. If you are truly a Cracked fan, you should be willing to try issues you haven't read before. You might find yourself creating new memories to be nostalgic about.

I will "try it and find out". Will it put the Shakes in My Trousers?

Writing to you is fun. I "tried it and found out".

Thank you for your time.