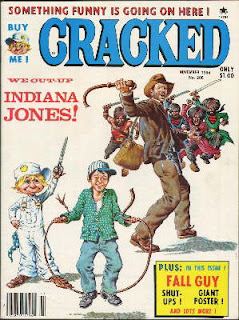 Short Round is in mid-air. Was this a greenscreen shot where the artist forgot to put in the background? Well, it is nice to see Indy back. I haven't seen Temple of Doom in years and years. Hey! Look! Another Fall Guy parody...Was Fall Guy that popular?

POSTER: Pee yellow background but with a white border..."How to Avoid Confusion!" I like this one. There is a lot of text but that doesn't ruin it. A little bald guy leads us through it and gives us a Thumbs Up in the end.

TABLE OF CONTENTS: "Bill Sproul" is now the editor. Mick Stupp is our pruuph raedre. 9 writers.

LETTUCE FROM OUR READERS: Michael Jackson's head is in the lettuce. I think it may have been there last issue. Next issue - Oct. 30, 1884. One letter mentions a JACKSON 5 poster. Where is my Jackson 5 poster?

INDIANAPOLIS BONES AND THE TEMPLE OF GLOOM: More or less each panel covers a scene in the movie, except for the opening sequence. That takes three of the 7 pages. It felt like they were stretching out and then forced to speed it up. It reads a little weird. Maybe this should have been longer, maybe better paced. I don't know. It's not a bad read. It moves fast and there are some funny moments. It's just such a bumpy read. Strange. You think they would have got the knack of this sort of thing by now. But, I was tempted to go back and watch the movie again after reading this. That can't be bad.

A CRACKED CATALOG OF SUMMER SURVIVAL GEAR: Three pages of goofy ads...An Ice-Pack headband is just a headband with cubes of ice in it. They melt and cool you off as you go about your business. Buy a can of Cling-Off to keep clothes from sticking to you. An Insect Repellent Vest is filled with bullfrogs. And, a special tanning tape with dye packets. The sun melts the packets leaving a tan behind! (Not a "tan behind" a "tan in its wake".) And for the New "Punk Tan"...Yeah, a punk joke. Oh, CRACKED, thou art square!

ABSOLUTELY, UNQUESTIONABLY...THE CRACKED LENS...Part XXVII: Sorry. I didn't feel like writing out the whole thing. 4 pages of Laffs! Really Truly, these are always fun. And, this is no different. Maybe there should be a bound volume containing every CRACKED Lens ever? It could sell for $400.

THE CRACKED GUIDE TO BOATING: Repeat from #129

ANOTHER CRACKED LOOK AT A VIDEO ARCADE: The weirdest article in some time. We see a lot of games: Ms. Pac-Man, Food Fight, Dragon's Lair & Tron. We see Bunny Bash and Spinach Monster, which may not be real games. There's a lot of stuff in the background of these one-panel gags. And, sometimes, the foreground. A man plays the tiny version of Pac-Man as the gag happens behind him. (You know the tiny coin-op games. You got them for Christmas. I got Galaxian.) All the stuff going on makes for a lot of fun...But, it's the words that throw me. The opening: "It's been a few years since we took a peek at what goes on inside of one of those electronic game rooms and..." "Electronic game rooms"? What the heck? And, has it been a few years? That Video Game Special I reviewed was less than a year before this.

That is not the really odd thing, though.

Two ladies talking:
1: Video has helped me lose 26 pounds.
2: Go on. How could video control your eating?
A joke follows.

Two kids.
1: That's it! I've had it! No more video for me today!
2: But you love video. Why would a fanatic like you quit?
A joke follows.

Two different kids.
1: My dad says video is a waste of money.
2: Not my dad...In fact, he thinks kids should play video at least 3 hours a day.

"Video"? What in the Name of the Lord? There are no "video games", just "video". Did anyone ever call it that? The super-weird thing is that I can see them goofing like this (The Fonze) at the start of the trend. But, at this point, we're nearing the end of the 1st Wave of "Video". What the hell are they talking about in this article?

Actually, the oddness of it makes for an interesting read.

THE DIFFERENCE BETWEEN THE 1ST DATE AND THE 2ND DATE: Some of this is fun, like "Making Out". Maybe 1st date and 7th or 8th date, instead of 2nd. I've been on plenty of 1st and 2nd dates (Yes, even Pierre L. can find love!) and this article seems off. Something stolen from Henny Youngman's notebooks possibly. This bit has a couple of nice moments but doesn't quite make sense.

CRACKED PRODUCTS FOR EVERYDAY USE: Repeat from CRACKED #156

THE CAMP GOTCHAMONEY NEWS: They haven't had something this wordy since the Cowtown Gazette. It's a camp newspaper. Four pages of lots and lots of text. Unfortunately, this isn't as funny as Cowtown. It's too easy a target. Making fun of bad food, old dancers who don't know the "hip" moves, counselors that are jerks...There is, however, an editorial that is titled "Please Don't Pick On The Fat Ugly Kids" Funny title. No need to read the editorial. That's the way most of this is...If the headline is funny, don't read the article. It has nothing. But, if the headline is bland, read the article. I never went to a sleepaway camp, just saw them in movies. Maybe this would mean more if I had...As it is, it's definitely worth a read but I didn't lose my trousers over this.

rodrigues' SIDE SHOW: Three pages of some very strange one-panel bits. I like this. It is bizarre, which CRACKED is, generally, not.

CRACKED HOLD-UPS: A funny round of these goofball gags! Still love 'em!

THE FALLING GUY: The last Fall Guy parody was in #198. Was the CRACKED community clamoring for a repeat? Well, as I was part of the community at that point, the answer is No. But, I like this one better than the first one...only because I'd read the first one and was familiar with it. The joke about Lee Majors stuntman is a good one. It all has a nice flow to it that makes for an easy read. It's more coherent than the opening parody. I will, however, pass on future Fall Guy parodies, unless they're teamed with Simon & Simon.

SHUT-UPS:
1 - Reggie
2 - "The color's off on your set...the hair looks blue and lips look green...plus the sound is really awful!" "SHUT-UP! Nothing's wrong with my TV set. That's the way my rock videos are supposed to look and sound!"
3 - Makes no sense.

Odd...this SHUT-UP alienated me, especially the last one. Am I missing it? Does it make no sense? To the Back Cover...

It was an issue of CRACKED. It had some good moments but many more "Huh?" moments. I can feel the era sliding to a close. And, I can also feel the time when I read the magazine, as a child, also coming to a close...What do the final four bring? Well...

Next issue: Rock & Roll! (And, we all know how good CRACKED is with that subject.)
Posted by Turbot's Finest at 10:30 AM

Perhaps it is time for you to try out the Cracked magazines that you didn't read as a child. Be brave, and broaden your horizons.

I'm with VeniceBlue on this. I've been checking out your blog for a while and I say don't stop. Keep going. I think you should also do more of the Collector's Editions. If you're missing issues, I can hook you up.