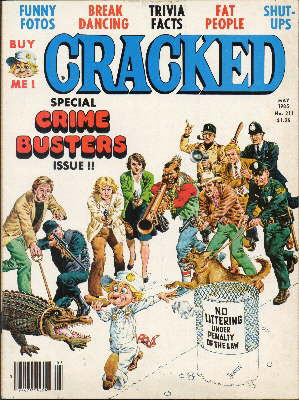 Sylvester is about to get...Oh boy! Watch out, SPS! I wonder why they didn't color in the trash can? Well, it looks like there's going to be a lot happening in this issue. We better run in...

POSTER: National Students Day is on 2/29/85...Hey! Didn't they have the Day of the Child in 1979 on a school day? That meant that many children didn't actually get to go out and celebrate. It was up to their teachers to decide if they went out or not. I know it happened...I've seen the You Can't Do That On Television episode from early 1979 where the kids talk about it. I'm not sure if there's Ruddy involved. I don't remember.

TABLE OF CONTENTS: I see Bob Sproul's face! In my dreams!...no, he's in one of the little panels. "Ms. Spell, proufradar"

LETTUCE FROM OUR READERS: "Get the first issue free!" I think Michael Jackson might be reading CRACKED! Although, the cover he's looking at reminds me of a MAD cover. "BFFV SFM WNYFA OAL WNYFA OAL PJH XFWDZ WJFT NA PJH AHGP NWWCH!

THE CRACKED MOVIE V: All the current TV detectives and action folks are called together by Mr. Sproul to find the CRACKED logo, which has vanished from the CRACKED safe. Magdumb P.I. and Nagme and Racey are the leads here. (Hey! I see Nanny Dickering!) The guys from Rippedride are there too! What a great* show! This has a fast flow as they track down the man that stole the logo. In the end, Jessycar Ketchup sums everything up. It was the people from Scaredcrow and Mrs. Cling! Pretty breezy and entertaining. I liked this opener.

A CRACKED CATALOG OF EQUIPMENT & SUPPLIES FOR WEATHERING WINTER: Another catalog? Hmmm.. Luckily, this one's fun. The Sno-Tow Walkway Rug "Our Bottoms Are Waxed For Pulling Ease." (Mine too! And, I'm Pierre L!) You roll the rug out over a walkway. It snows. You inflate the walkway and then slide it away, dumping the snow on the lawn or in the woods. Weatherperson Hate Mail! So much profanity! Wait...I'm thinking of something else. This article is three pages and I like it. On Your Guard Germ Guard! You get fake arms that shake sick people's hands for you! I like this bit.

KITCHEN LAND: The Ultimate Roach Amusement Park! So, I stop reading and suddenly the magazine becomes more fun than it's been in ages. Three pages of roaches having fun in your kitchen. We Have...Catapult Rides! They sit on the edges of mousetraps and go flying. We Have...Jungle Gyms! Playing in Swiss Cheese. We Have...Water Rollercoasters! Sliding down the drain. We Have...Trampolines! Jumping on sponges. And of course we have...Convenient, nearby, affordable, accommodations. So Come On Down! (That would be a Roach Motel.) Great article. Laffs galore.

ROCK MUSIC WORD PLAY: And, they're having fun with Word Play. Every square is a popular or classic rock tune. Eye Of The Tiger, Heart of Glass, All Night Long, Roundabout, White Wedding, Double Vision, Footloose. Cool.

YOU KNOW YOU'RE A SUPER TYPE...: OK, well. One of these in an issue doesn't hurt and it is Super Hero stuff. "...if you're struck by lightning and like the way it tickles!" "...if you're fast enough to dance with three guys at the some time." "...if you're a terrible lover because you keep fracturing your partners' rib cage." Ouch. Two pages = easy peasy. I like the art here,

A CRACKED WESTERN YOU'LL NEVER SEE: This one-pager almost works. But, the art is a little garbled at the end. It seems like there is a panel missing between the penultimate one and the final one. I get the joke but it's awkward.

CRACKED'S LITTLE KNOWN TRIVIA FACTS: Funny Fotos continue. Although, the Fotos aren't actually funny. It's what CRACKED places around them that makes for funny. We get questions...A still, sometimes with a word balloon in it... and then the upside down answer to the question. Example: Where is the world's only talking train located? We see two businessmen. One of them is looking at a train. The train is saying "Pssst! Wanna race?" The Answer: Brotwurst, Germany. Hey! The Mad Hatter is in one of these. Some very silly questions, some nice use of stills and some silly answers make for a gloriously silly experience in the land of the CRACKED Magazine. Thank you...How's that, Glenda?

SAGEBRUSH: Two pages of SB! 7 several panel bits. Wow! I haven't seen this much Sagebrush in here since Momma used to do it herself. Scintillating!

Sorry everyone. I just had a "Holiday Eggnog" and I'm feeling like the "Best of the Best 3: No Turning Back"!

THE CHARMING INDIA FIRE DEPARTMENT: Another fun one-pager. This issue is really breezing by with laughs. I'm impressed and surprised.

CRACKED INTERVIEWS THE BREAK DANCING KING: Why isn't Nanny around anymore? She "snagged" the Millionaire King. Way to go, Nanny! So, we have Cassie Collingwood and she's a sweetie. Less zaftig and more of a regular gal. She interviews Shabu! or Lincoln! (He has two names.) They walk around his urban neighborhood and he talks about breakdancing. We see people tangle themselves in knots and a guy "wear out his seat" spinning on his butt. But, in the end, Shabu doesn't breakdance because it's a magazine. Wise choice. Good interview. Welcome, Cassie.

IF THE WHOLE WORLD TURNED FAT: "...did you ever stop to and think what would happen...if everyone turned plump overnight?" I think it would go a little something like this. James Bond would have a big gut. Jokes about "My wife being so slender!" Elephants and rhinos would be the new house pets. Big girls in bikinis would sing songs about Tub Cola. Cher's Workout Book would be called "Fat at Last" There's a fat cast of Diff'rent Strokes and Magnum P.I. Blimp-Man would drop his giant butt on the villains. I like this article...The water bed gag is killer.

Shut-Ups have Shut Me Down!

BACK COVER: Hudd & Dini - They tried again and they didn't make it. Well, they're persistent. I'll give them that.

So, we have the most consistently excellent issue of the magazine in a very long time. Maybe if I hadn't stopped reading regularly the issue before I would have gone on reading forever. Good issue. Sproul Is Going Out Strong!

Next Issue: Say goodbye to Sproul. One Last Round.

I was a big fan of You Can't Do That on Television too, and my favorite was also Lisa Ruddy. (Also, we are both Cracked fans and I live in Canada too, eerie, huh?)
Tom

That is eerie! I think she runs a funeral home with her husband now. And, I'm sure it's the Wackiest Funeral Home in the Country!

Hope you had a Merry Christmas! I'm taking a writing vacation...

Talk to you soon.