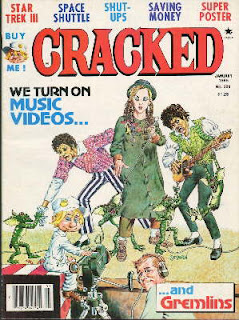 MTV...you are in trouble! I wonder what "Space Shuttle" could possibly involve?

POSTER: "Official Location Map" But, hey! It' doesn't make any sense! A series of varying shades of yellow and a series of locations make for a series of yuks in the House of Pierre!

TABLE OF CONTENTS: "Mick Stupp, pruuph raedre" There's a man dressed as a banana! The hell? I just wet 'em and I'm not even inside the issue yet!

LETTUCE FROM OUR READERS: Next issue - Dec. 11th, 1984. A reading turning point for this blog writer or "Bliter". Oh, did you notice...the magazine is now $1.25, instead of $1.00. Comedy isn't cheap. (Except when Pierre Writes it! I'm kidding! It's the holidays. I'm full of mirth and nog.) On Page 5, there is a "Sliding Down The Family Tree" article. "A Continuing History of the house of Sylvester" This is from Issue #128.

GRUMBLINS: Perfect choice for this time of year, this time is so much fun.. It's a 7-page breezeparody through the movie and it's fun. It goes very quickly and misses quite a few high points but, if you've seen the movie, it's fun. In fact, it actually makes me want to go and watch the movie again, which I remember being fun. The whole piece has a nice Christmas feel and if you know Pierre then you know that I've got a nice Christmas feel to me, a feel of fun.. Good parody to open the ish with, a fun.

CRACKED LOOKS AT ARCHEOLOGY: This one's sort of a free form series of panels, many without borders, that is pretty darn funny. Two archys break into a tomb proclaiming "It looks like they were more advanced than we thought." We see a guy sitting in a chair with a "GO NILE U" T-shirt on in front of a TV. There is a very funny Atlantis Hilton gag. And, they find lots of Tupperware at one site. This is a funny bit. 4 pages of me laughing and then smiling and then cheering Nile U!

YE HANG UPS: Four panels. Four learning experiences regarding being held prisoner in the Middle Ages...Dark Ages...? Could I get a date here, please?

ABSOLUTELY, UNQUESTIONABLY...THE CRACKED LENS...Part XXVIII: 5 pages of chuckles and laughs and a still from Freebie & The Bean! The Heck! I'm in CRACKED Heaven! "I promise never to wear this tie in public again." is a favorite. "I always point my lettuce to the North." is another one. Nice.

SHOWBIZ-TYPE ELECTION ADS: "California Ron Battles The Party Of Doom" "Tax Breakin'" has old people break dancing. "Kremlins!" "The R-Team" And..."Tuesday the 6th - The Final Chapter" This is one of the very few references to the slasher era of the early 80's, which was now ending. It would go into a very independent area soon, including all of the SOV's. It is odd to see Jason's mask with the knife through the eye. I wonder if CRACKED realized how many kids loved slasher films, even if (like myself) they were too afraid to watch them.

CRACKED BLASTS NASA: "Space Shuttle" is revealed! Anyone here ever play the Space Shuttle Atari game? Starcade once offered it in a prize package. If you have played it, quit being so smug. Anyway, two pages of one-panel gags about the space program. I love the art in this one it's nutty. The gags are variable but I find myself smiling and going "Ha Ha" throughout.

IF FAMOUS LINES WERE SAID IN DIFFERENT SITUATIONS: This bit looks very familiar. Roderick, could you check the back files to see if this is, indeed, a doubler?

Regardless, "I never met a man I didn't like" shows two cannibals having finished a meal. "There's a sucker born every minute." has a man at LaLee Pop & Sons, Inc. getting excited about his job. "Gee, grandma, what big ears you have." shows a girl watching Grandma haul ears of corn from the field. I put my Laugh Hat under my mouth and filled it up!

WHAT ATHLETES DO IN THE OFF SEASON: Hurdler (Mailman), Pole Vaulter (Coconut picker), Javelin Thrower(Trash Grabber), Discus thrower (Skeet Shooting Thrower), Hammer Thrower (Ace Demolition Co.) Each multiple-panel strip begins with the athlete doing their thing and then it becomes their job. Good.

THROUGHOUT HISTORY WITH THE REAL GREMLINS: 2 pages, six two-panel strips showing Gremlins on an ark (not Noah's), at the Ford Theater (you know what I mean), in Mrs. O'Leary's shed, on the Titanic, with Samson & Delilah and in the Watergate Hotel. Obvious but not without its patent CRACKED charms.

HOW SCHOOLS CAN SAVE MONEY: Combine English & Auto Mechanics! Combine Home Ec. & Biology. Pay showers! Ads everywhere! Hey! They will save some bucks! They should go with all of these plans. Really, if you need to save some money for your school system why not go to CRACKED? They've got the Inside Track! Kids can purchase a "can't be called on" card so they can't get called on. Combine classes and rent out the now unused rooms as Hotel Accommodations! I think they're onto something! My Funny Bone!

STAR DREK III: THE SEARCH FOR SPOOK: I never saw this movie but I read the novelization. And, I think this parody is a fine parody of the novelization of the film that I remember from over 25 years ago. Although, it does that thing where it's so busy telling it's CRACKED-style jokes that major moments (like, say, the Enterprise exploding) could be missed. So what do all the panels deal with? Comedy! Right in your Fat Pants! The place CRACKED aims for and hits!

CRACKED INTERVIEW THE MUSIC VIDEO KING: Lionel Itchie! I get it! Cassie Collingwood (who?) interviews Mr. Matthew Thomas Vealgrinder. (Initials, please.) He talks about running MTV and how popular they are and how they show a lot of the same things over and over...but, they rejected a video from Clara Peller. "...she had a song called "Where's The Beef?" It consisted of her mumbling that phrase 100 times to a disco beat while a hamburger danced around behind her." That's awesome! Cassie's OK. She's no Nanny. There are some funny bits here about MTV. I do forget how popular it was. I remember everyone assembling to watch Thriller. Have I told that story before? Maybe I have. "Where's the Beef?...Where's the beef?...Where's the Beef?...Where's the Beef?"

BACK COVER: GREAT MOMENTS IN SPORTS! "Eddie (Boom-Boom) Rodriguez rides his 500th winner with no losses." He shoots the competition!!!!

Well, I liked this issue. Maybe I'm feeling overly festive but this is Hoots Town, U.S.A.

I can't wait to read the next issue...It's an important one for Pierre.

Next issue: It's an important one for Pierre. The next issue that I can't wait to read.
Posted by Turbot's Finest at 1:02 PM

Alright, Pierre. I think we dserve an answer here. We know you read Cracked for years but we say Keep Going! What do you think?

I say keep going as well, I love the Michael Delle-Femine issues of the late '80's.