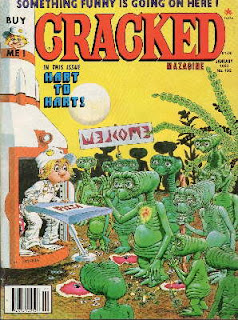 Great cover...Sylvester! Surely delivering one pizza to another planet can't be cost-efficient but then I've never run my own business...so what do I know? Fun opening...the Hart to Hart thing doesn't do much for me but it is the first issue dated 1983. That's cool.

POSTER: Be Alert...Can you guess the rest of the gag? Odd. Yellow lettering on a black background.

LETTUCE FROM OUR READERS: Next issue - December 14th A joke from a reader: "What's Irish and sits out in the rain? Pati O'Furniture" Everyone is CRACKED and it feels nice.

HEART TO HEART: Interesting bit. It's certainly got a lot of verve and movement throughout. But, I've never seen this show and I know next to nothing about it...and that was my problem. I spent the whole article, literally, trying to figure out what kind of show it is. Are they detectives? Are they a couple who just get in a lot of trouble? Is the show supposed to be witty? Is it drama? Is it action? If I knew the show, I think I'd love the article. But, as it stands, I can't figure the darn thing out.

Chalk it up to...The Ignorance of Pierre L.

SOLUTIONS TO EVERYDAY FRUSTRATIONS: This bit seemed like it was going to be one of those "This thing on this side - this other thing on that side" sort of articles. And, it is. But it's more elaborate, although, not necessarily funnier. I'll give an example...

LEFT SIDE: You play a new video game only to find that your final score is two.
A guy looks very confused because he only got 2 on Snail Squasher.
A woman says "Two? You get 2 points for depositing the quarter. Boy, Barry, are you lousy. Larry is much better at this than you."
RIGHT SIDE: To prevent this from happening again, you should buy all the "How To Win" video books and practice every second you have.
The guy now has 6,000,000 points.
WOMAN: 6 million! Wow! What do you say we go to "Mike's Gouda Cheese Pavilion" and celebrate.
MAN: Sure, only, I can't buy you anything. I spent every cent I had practicing to become good at this.

They're not bad but they seem like a lot of effort. I don't know why. Is Pierre L. Lazy today?

MORE BELIEVE IT OR NOTS: 3 pages. Some of them quite funny. Osgood Asnew and his washing machines will make you laugh at loud.

HOW POPULAR ARE YOU?: Each section has three choices to see how large your Popular Score is going to be. Again, this is a rather over-elaborate bit for CRACKED. A lot of stuff to gander at here. "When it comes to choosing up sides for a team, how long does it take before you are picked?"
A - Not too long
B - A little long
C - A very long time
And, there is gaggery that goes with each.
At the end, there is a section for tallying your score. Some people are more popular than others. This isn't a bad bit. It's got some good laughs...it just seems too complicated. What happened to "You Know You're Fat When..." Of course, I never liked those bits.

SAGEBRUSH: Not one of his better adventures.

YOU KNOW YOU'RE GOING TO FAR WHEN: Video Game Edition! Yeah, this is great. "You own every towel, notebook, pillowcase and piece of clothing that Pac Man's face is on." I used to be that guy! I owned the "Pac Man Theatre" or something like that. There was a small TV-like plastic thing. You got 4 "adventures" to play. Each was a series of comic panels on paper wound around two spools like a ink ribbon for a calculator. You would spool the "adventure" in front of the TV screen. Slowly, you would go through a Pac Man adventure and then rewind it and watch it again. Loved it! Remember his TV show. And when he saved Christmas! Hell yeah!! sigh...This article is only two pages but it's great.

I will review the CRACKED Video Game special sometime soon.

TRUE FACTS THEY NEVER TAUGHT YOU IN SCHOOL: "You know food is really ethnic when it gives you heartburn-before you finish eating!" "Despite our name, CRACKED readers are the sanest folks around!" "Any music that you don't enjoy-sounds all alike!" (They still hate rock 'n' roll!) Now, this is more like it. The headers and the straightforward pictures. Why are there so many of these in this issue, though? Are they teaching us some sort of lesson? If they are, I need a CRACKED teacher sent to my house to tell me what that might be. It looks like they're just fat-cracking around to me.

A CRACKED LOOK AT AN AUTO REPAIR GARAGE: Oh, the joy! One of these. It's chaotic and it's crazy and those old, old jokes are killing me!

However, in the lower right hand corner, something odd is happening. There is a "Stock Room" right in the corner with cattle in it. A rooster is on top yelling "Cock-A-Doodle-Doo to you, too!" at the cattle. And, to the left of the "Stock Room" is a joke...that doesn't seem finished.

A guy says to another guy: "Frank what are you doing later? Marge and I would like to have you for dinner tonight." And Frank is saying nothing...Did I miss the joke?

Why the Stock Room and what is that joke? Surrealism in a CRACKED LOOKS AT... bit. Naw, probably an error or I'm missing something.

....THE CRACKED LENS...PART XVII: Sorry. I wasn't up for the full type-out this time around. There is a still from "Abby" in this. Wow.

RETALIATIONS TO DATING CLICHES: "When are we going to get married?" "Probably when we find the right person."// "I'm very choosey about who I go out with." "Obviously I'm not." 2 pages of that. Is this the "Annual All-Filler" Issue of CRACKED? This whole issue feels strange but it's the same group of Dunderheads making it. Hmmm...

MOD FAIRY TALES: Fun illustrations for a new "The Princess and The Frog". Worth a look and a smile.

ROCKY'S SCRAPBOOK:...and boy did I have scraps! (Rocky says that. Not me....Pierre. L) 4 pages of goofing. Rocky fighting as a baby. Dean Martin shows up. Burgess Meredith is there. Clobber Bang bits him up. Rocky has been with us for quite some time. Remember when he first showed up? Didn't he beat up The Fonz on a cover? Hmmm...Next!

IT'S A SURE BET THAT...:Seriously? More of these bits? No "Guides" in this issue? Where are the parodies? Hey! A guy has a Pac Man coat! "Sometime in the next 5 weeks you'll have 341 good laughs." A kid is seen reading CRACKED. Wow...CRACKED believed there were 341 laughs in each issue of their magazine? I'll go through and count them up soon.

E.T.'S REPORT MY EXPERIENCE ON EARTH: This is a lot like when C3P0 & R2-D2 came to Earth some time ago. E.T. is amazed that no one flies here...except for witches, kids with lots of balloons and really tall basketball players. No green creatures on TV except for The Hulk and Kermit The Frog. E.T. gazes at the stars through a telescope. Some guys gaze at the YWCA through their telescopes. E.T.'s conclusion: "I departed the planet just in time. Earthlings were in the process of stockpiling more and more nuclear weapons. Their reasoning was that creating more weapons would insure them not being used...I find it noteworthy that this same type of specious logic was also once advanced on the 753 other extinct planets of our galaxy."

All right, who's writing this issue?

THINGS WE'VE OFTEN WONDERED ABOUT: What is Prince Charles and Lady Diana's last name? Why does lint accumulate in your belly button? Why can't women learn how to put make-up on in moderation? All like that...What a weird issue.

Total: Where the heck is Nanny and the closing parody?

BACK COVER: Great Moments in the Art of Love. 350,000 BC All about Ug the Gentle. Remember him?

The oddest issue I've read in some time. No "Big" articles. And, the regular stuff is missing...Weird. I mostly enjoyed it but found the whole thing a bit...I wonder if the next issue is like this.

CRACKED is changing. Shall we go with it?

Next issue: All right! The Knight is here!
Posted by Turbot's Finest at 8:46 AM